Or, how Barack Obama and Martin O'Malley are hitting the same rhetorical high points. 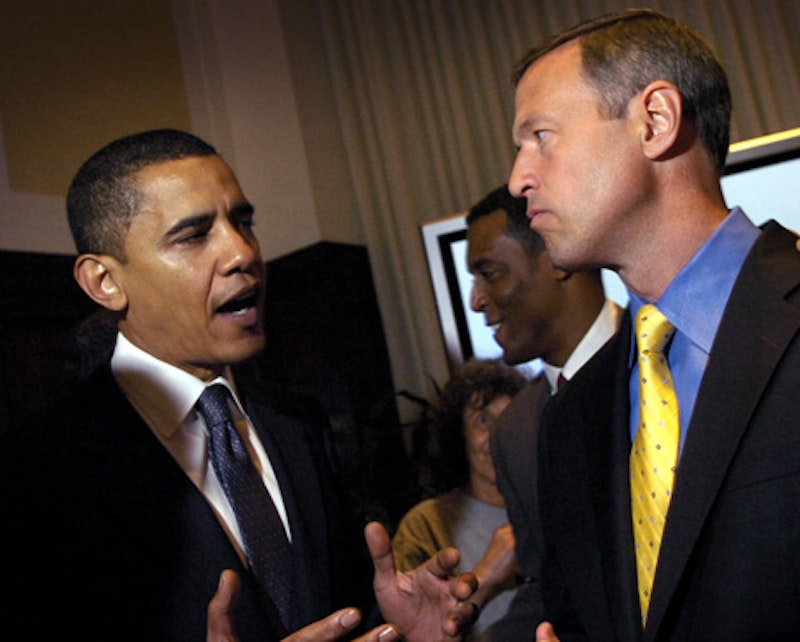 The symmetry is uncanny: A president at the apogee of a bounce, and a governor on the rebound in the polls, each delivering a stern challenge of reform and innovation to build a future on the accomplishments of the past through unity and a competitive spirit. These are the grand themes of renewal and revival, staples in the speechwriters’ toolkits, issued to a nation and a state that are undergoing cyclical identity crises.

The fungible speeches were delivered a week apart by President Barack Obama, from the well of the House of Representatives, and Gov. Martin O’Malley, from the steps of the Maryland State House. They are remarkably similar in nature but strikingly different in prose and delivery. One man is already president and tooling up for a second run for the roses, and the other, many believe, would like to be and is already lacing up his Nikes. But that’s another story for another day.

O’Malley registered a 58 percent approval rating in the latest Gonzales Research poll, in part because of his impressive 14-point win against a Republican surge in November, one of the most decisive Democratic victories in the nation. And Obama has recovered to 54 percent in several polls, give or take a point or two, attributed mainly to a strong performance during the lame-duck session whose outcome was more productive than most regular sessions.

“What comes of this moment will be determined not by whether we can sit together tonight, but whether we can work together tomorrow,” Obama intoned in the inverted parallelism sentence structure favored by John F. Kennedy “Ask not what. . . etc.)

“We cannot allow our individual sense of entitlement to tear apart our shared sense of community,” O’Malley said, invoking the “One Maryland” motif that glues together many of his speeches.

Obama stressed the phrase “win the future” over and over while O’Malley used the word “forward” a dozen times by actual count. But Obama’s most commanding line was delivered when he put on that stern professorial look and lectured the bitterly divided Congress: “We will move forward together, or not at all.” This is the sentiment that everyone assumed the nation was waiting to hear, judging from different interpretations of the November election results and the smarmy performance of members of Congress on speech night.

Both Obama and O’Malley are techno-geeks, born and bred since all of the electronic gadgetry has entered our lives. Both Democrats spoke of “investments” in the future, bio-tech industries and renewable energy and the need to reinvent ourselves if we are to regain the competitive edge in an expanding and fragile global economy. And as if to reinforce the words and the imagery, Obama traveled the next day to a high-efficiency lighting manufacturing company in Wisconsin. They both embrace the truism that government, in many cases of technological advance, must be the first risk-taker before business jumps in to reap the profits.

To their credit, neither Obama nor O’Malley is episodic. Both are systematic and methodical in their preparation and presentation, stopping at the word visionary because they are limited by economics to what is necessary instead of what is desirable.

So just what, for crying out loud, is going on here? This is not a simple case of echolalia or of one official cribbing from another’s “Cliff’s Notes.” When analysts and speechwriters dissect speeches they talk of “capturing the moment” in history in tone, tactic and vivid imagery that live long after the spoken words have fallen silent. And nobody put it better than Woodrow Wilson when he observed that “The ear of the leader must ring with the voices of the people.”

Speechwriters pour over the texts of others for ideas as well as strategies. Interest groups and government agency heads claw for a mention or a nod from the chief executive. Before Obama’s speech, analysts were debating whether Obama would choose a Reaganesque theme similar to “Morning in America” or a Clintonian approach of “triangulation.” He did a little of each, supplemented by ideas of his own that match the moment—mass murder in Tucson and joblessness run amuck.

Great speeches live on long after their writers and orators are gone. Today we read and hear the cadences of Jefferson, Lincoln, FDR, Kennedy and maybe some day Obama. He truly is a gifted writer and speaker, although last week’s effort was restrained, deliberately so, and did not live up to the eloquence of his very best speeches. By Obama’s own high bar, this year’s state of the union speech was a let-down.

And that is the point. Obama captured the moment, more or less, as did O’Malley to a lesser degree, a period in American history that occurs every 75 years or so, when the nation seems to stall and sputter into a paralysis of uncertainty and impotence. It occurred in the late 1890s, in the 1930s through the time of the depression and again in 2008 with the near collapse of the global economy. It’s tough to be a cheerleader against those backdrops.

Both Obama and O’Malley are motivators in-chief who lecture us regularly on the can-do spirit of America. Obama’s speech was subdued out of reverence and respect for Rep. Gabrielle Giffords, and the fact that he was kicked in the shins by the electorate in November. But moreso because the nation is hurting and the misery is widespread. Sixteen million people are unemployed and the economic recovery is slow. And yes, it was date night when Democrats and Republicans commingled in the House chamber and avoided, to some degree, the usual partisan shtick which is probably reserved for a another day.

But O’Malley has difficulty toning down his feigned exuberance and lowering his voice when delivering from a text as if yelling into the microphone will emphasize his message. He is much more effective when he is speaking extemporaneously, but that is too much of a risk for an inaugural address. Nonetheless, he was on point, just as Obama was, in his effort to restore confidence in a brighter tomorrow.

Obama’s speech, of necessity and design, had many layers. And one important sidebar was his pre-empting part of the Republican agenda to cut spending, reform the tax code and to cozy up to business. The budget numbers might not add up but it was a good college try. O’Malley had no need to do so as Democrats are in firm control in Maryland.

Thus, Obama is already being criticized for moving to the ever-shifting center of the political system and away from the left. Truth be told, in today’s world, the center is closer to the left than it is to the right and besides, Obama never has been the loopy leftist that his enemies claim. He is more Heathcliff Huxtable than he is Bobby Seale.

But if rhetoric is the future, America and Maryland are in good shape.