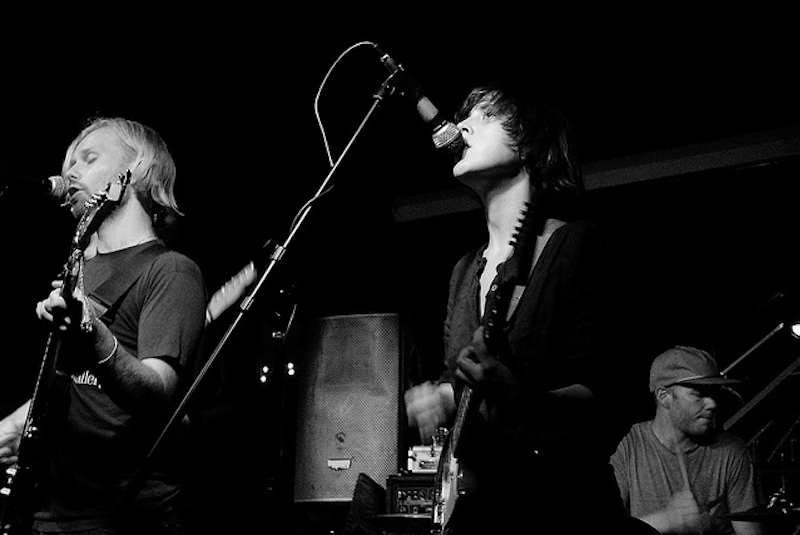 This past weekend, The Baltimore Sun's Sunday edition featured an article by Erik Maza on the city's latest up-and-coming bands, including Lower Dens, Future Islands, Lands & Peoples and Weekends (with a brief nod to J. Roddy Walston and the Business). First, nice job: that's a lot of local talent that deserves all the good reviews that come their way. Now, I won't talk about how much of a toolbag I think Erik Maza is (I've already done that). I won't talk about all the glaring errors (I know there've been a lot of layoffs, but Jesus Christ—"...referring to a couple of olderof other experimental bands" [sic]—take five minutes to look over your work). And I won't talk about all the fuck-ups that anyone who's been in Baltimore for more than six months (or was even half concerned about the quality of their writing) wouldn't make—I don't know anyone who would say The Depot is a "Charles Village hangout"; it's Brian Goldstein not Brian Silverstein; and no one has ever driven from Baltimore to NYC in two hours. Philly, probably, if you're lucky; fuck, I've sat in traffic just trying to get over the GW Bridge into NYC for more than two hours.

Of course this article could (and should) have been written a year ago, but that's not exactly Maza's fault. The Sun's music coverage is just all-around shitty anyway, and I'll refer you to the comments on Sam Sessa's review of the 2010 Baltimore Bass Connection Xmas show for reasons why, because commenter "Harvey Duncan" really nails it.

Maybe I should be happy that it only took The Sun about a year to report on Lower Dens et. al., considering they ignored Dan Deacon until years after everyone else had already talked about him; hell, part of me thinks The Sun found out about Wham City when Rolling Stone voted Baltimore “Best Music Scene” back in '08. Yet Maza's article is still oddly dated:

Two years after Beach House and Wye Oak were signed to major indie labels and the goofballs at the artists' collective Wham City brought national attention to the Baltimore area's ramshackle music scene, Lower Dens and several other bands, none of them more than five years old, are poised to be the city's next breakouts.

In the past year, the art-pop trio Future Islands, rock 'n' rollers J. Roddy Walston and the Business and Lower Dens all released their first label albums, sold thousands of copies and toured internationally. And upstarts Weekends and Lands & Peoples have moved from playing shoebox venues to opening for bands like Wye Oak, and are on the verge of releasing their first full-length albums.
To say, for example, that Lower Dens is soon to be another Baltimore breakout band (and they're not even five years old!) ignores the fact that Jana Hunter has been at this for about a decade now, and that Twin-Hand Movement made all kinds of Best of 2010 lists. Arguably, Lower Dens, Future Islands and J. Roddy are all as popular as a band like Wye Oak. They've all "made it," by whatever vague metric you want to use to define making it. Maza says it himself: they've "released their first label albums, sold thousands of copies and toured internationally." But here a line like that is just another part of the antiquated logic about fame and industry success, and the naive confusion about artistic purpose.

Every October, musicians from across the globe come to New York to play there, performing at venues across the city before industry cool kids and music critics with hopes of landing a record deal, an agent, a jingle, whatever might snatch them from anonymity.
And his introduction to Hunter's move to Baltimore:

Baltimore's music scene was not where conventional wisdom would have sent a budding musician like her. There were no major record labels here or savvy talent scouts, and Dru Hill was perhaps the city's most well-known group nationally.
Come on. "Industry cool kids"? "Savvy talent scouts"? "A jingle"? Really, a fucking jingle? What is this 1957? It's stupidity like this that allows Maza to say Twin-Hand Movement "has sold a remarkable 3,000 copies" (emphasis mine), or "[Lower Dens] was among the most sought-after bands at CMJ," and yet still somehow argue that they're almost, but not quite, there yet. Or to quote Hunter as saying, "We took every show that was offered," and talk about how "Lower Dens' goal [at CMJ] was to find an audience," and then write a line like, "At the show, Hunter didn't seem to want to be noticed."

More than that, the article never considers its own inherent contradictions: that Hunter and Future Islands' bassist William Cashion talk about the Baltimore music scene as decidedly non-commercial—"...a different kind of music scene... one where artists were looking for creative freedom, not money... their commitment to working for art's sake"—and that Maza then frames all of that in a narrative of corporate ascendency: record sales, successful tours, major labels, "whatever might snatch [a band] from anonymity."

Then there's all the stuff about how friendly and supportive and close-knit the Baltimore scene is:

The distinguishing characteristic of Baltimore's music scene is that it's not as Balkanized as other well-known music hubs, like Los Angeles, New York City and Hunter's Houston. It's not so much a scene as a jungle gym of disciplines and genres.
Let's ignore the fact I have no idea what that last lines means: "It's not so much a scene as a jungle gym of disciplines and genres"? What are you talking about? I have to be careful here because I've made this same remark at various points and now find it somewhat regrettable. Sure, it's true to an extent: Jenn Wasner sings back-up on Small Sur's first-album, Jones remixes Future Islands, Lands & Peoples tour with Secret Mountains, then there's the whole Wham City Round Robin thing, and Dan Deacon covers Beach House, Beach House covers Dan Deacon, etc. I get it. But that's not Baltimore's music scene: that's Baltimore's twentysomething white kid music scene. The next time Arty Hill, Rye Rye, and Double Dagger play the same show, let me know. And alright, that's not really fair, a show like that wouldn't happen anywhere, but still, you can't write an article about how inclusive the Baltimore scene is and then only talk about Wham City and their friends. That's why J. Roddy is pretty much shafted here (he "isn't associated with the scene around the art collective"). In fact, the only quote Maza uses from him is about Wham City:

"In our touring, it went from, 'It doesn't matter where we're from,' to all of the sudden, clubs were interested in having bands from Baltimore," he said. "The success of those guys [at Wham City] changed the expectations of good stuff coming out of Baltimore."
I'm glad there's all this camaraderie around Wham City, but it's a small scene, and Baltimore has very few good venues, and that's why everyone's trying to help out so much. I love the Golden West but when the City Paper awards it Best Rock Club, 2010, we've got problems. So it doesn't make any sense to say "the distinguishing characteristic of Baltimore's music scene is that it's not as Balkanized as other well-known music hubs, like Los Angeles, New York City..." Those are huge cities, with way more going on. And yes, Baltimore is well-situated for touring bands, but that's not a Baltimore thing, that's an East Coast thing: 12-hours from Raleigh to Boston and as I've said before, most touring bands will often skip Baltimore for D.C. and Philly.