Whiting Out the Issue

Thoughts on the Hon controversy. 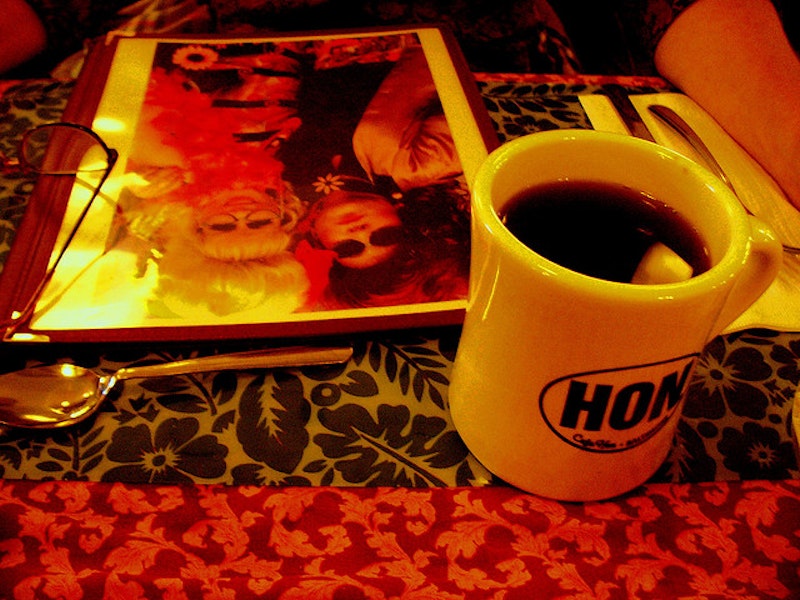 In a recent issue of Baltimore’s City Paper, Edward Ericson Jr. profiles Denise Whiting, owner of Café Hon and veritable lightening rod of controversy since—and some would say even well before—it was discovered she trademarked the word “Hon” last year.  A glance through comment threads at The Sun, the City Paper and any other Baltimore-centric pub will earn your eyes a barrel full of vituperative, malicious and poorly spelled invective. How dare she attempt to make money off a cornerstone of the local lexicon; and how could she not expect this sort of backlash (not to excuse inexcusable language)?

Cutting through this mess of public opinion and facts on the ground is not unlike news and political coverage of the Tea Party—it’s nearly impossible to triangulate political and policy realities, intangible human emotion, and the media’s own role in the situation. For either half of the country, it’s not enough to be objective; the story has to be right.

The “Hontroversy” (groan) deserves a patient journalistic tone, and I don’t believe Ericson came through in the clutch. He writes, near the beginning:

So let’s say this up front: Denise Whiting is not a villain. She has done nothing illegal—not that we can find, anyway—and her sins (if they are sins) are modest. She has at times overstated her own case. She has perhaps shown some cultural insensitivity. She has not followed through promptly on every ambition, particularly her own charitable corporation.

Whiting is, in other words, human. She’s just like any of the rest of us—except with maybe more gumption, more energy, and more determination to succeed. And that, at last, may be her greatest fault.

This passage is a bit of a cop out: anytime an in-depth profile uses the phrase “let’s say this up front”;  “let’s get one thing straight”; or “let’s get this out of the way,” it usually does nothing of the kind. It’s a classic example of where a writer needs to show—not tell—the reader, to let the facts and the observations of the story itself carry the weight of the article’s overall conclusion. The author links back to an earlier City Paper blog post that first mentioned Whiting trademarked the term “hon.” The post contains a normal amount of snark—unfriendly, judgmental, perfectly acceptable—and it’s as if the either the paper or the author is self-conscious of helping to “fan the flames” (the author’s words) of the controversy without concluding whether what was said was fair or not. It’s self-conscious without being self-reflective.

The other side of the coin is that the passage above is understandable given the anger surrounding the issue. Perhaps “say[ing] this up front” is a necessary spoiler alert that hard-line partisans on both sides aren’t going to find absolution. I disagree. What follows the piece’s introduction is a careful, well-written and well-researched profile of a woman clearly in love with herself, for questionably better and demonstrably worse. Some of what the author wants to get out of the way is undermined by the subsequent interviewing, most notably the inexcusably shady details surrounding Whiting’s non-profit, Project 12. To characterize that damning section in such a way—“[Whiting] has not followed through promptly on every ambition, particularly her own charitable corporation”—is to undermine the very reporting that makes the rest of the piece so strong.

I claim no objectivity here. I am close with a former Hon employee, a relationship that has not changed my previous conclusions regarding the establishment; I’m not “anti-Hon” so much as I think the joint’s food is inexcusably bad, overpriced and misrepresented on the menu. The aesthetic is pure kitsch, à la Disney World, but I don’t fault anyone for making it in the insanely difficult restaurant business. And you know what? I dig the flamingo.

As for the fact that Whiting has broken no laws concerning copyright—agreed, she hasn’t, and the legality issue is a dead end for opponents. What’s at stake here is a sense of community, something that can’t be adequately reported on by quoting copyright lawyers. When I saw this issue’s cover, I immediately prepared myself for some sort of grand statement. I was ready to be convinced that my own vague “anti-Hon” sentiments were unfair and unwise. My wish was not granted and my pre-conceived notions were not backed up by this feature piece, and I believe the City Paper missed an opportunity to find a deeper, more important narrative arc in this controversy.