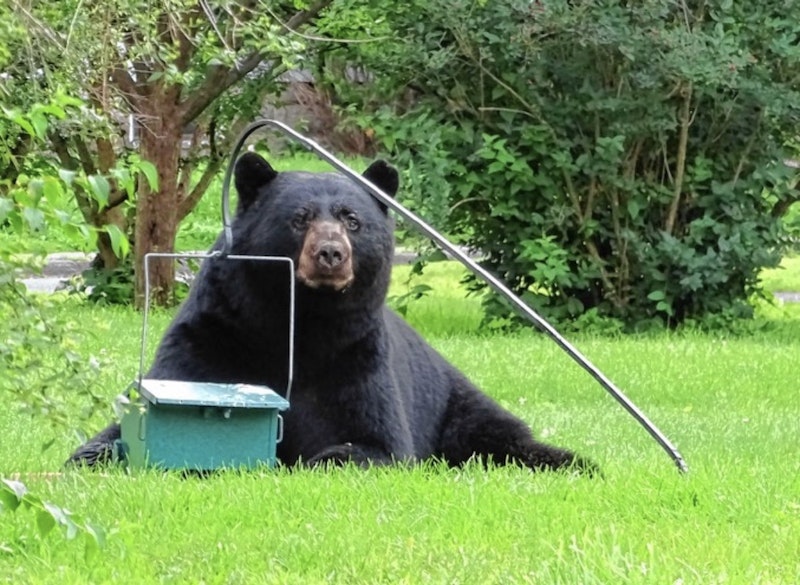 The gym, the library, and Town Hall were closed and my riding lessons on hold for the duration of the Governor’s shelter-at-home directives. So I continued walking some three miles or more a day on the back roads of Antrim, New Hampshire, the rural town in which I live.

A lot of hyper-local news appears on Facebook pages such as “Antrim-Bennington People” and “Antrim Neighbors.” The struggling local weeklies haven’t space or resources to cover everything and most small towns seem too unimportant for the state’s dailies.

Some people posted reports about black bears on Elm Ave., about two miles northeast of my house. Then a bear raided a garbage can on Old Pound Rd., about a mile west. One afternoon, while walking along Smith Rd., about a mile and a half from my house, I talked with a young woman walking her dog. A few days before, she told me, a female bear with three young, one carried in her mouth, ran across the road about 100 feet east of her driveway.

A female black bear’s feeding range is three miles; a male’s, about 15. I learned this after one rainy night last month. I forgot to bring in the birdfeeders and the bird suet cage. When I looked out the kitchen window next morning, the feeders were gone. I stepped out. Something had bent the iron staff that held the two feeders. One feeder was intact on the ground. The visitor had carefully lifted the lid, poured out the seed, and eaten most of it. The other feeder was crushed and torn apart. The suet cage had been torn from its chain and twisted open.

I bent the staff to a semblance of verticality and picked up the wreckage. I saw a large path crushed through the bushes and flowers on the small rise leading to the birdfeeders. All this suggested a visit from a black bear, Ursus americanus.

Later, while walking from the house to the barn, I noticed a large mass of excrement, peppered with birdseed, in the grass along the driveway. I went online and found several images of bear waste that resembled the stuff near my barn. Perhaps the bear ate our bird food, destroyed a feeder and the suet cage, and left a farewell present some 30 feet from my house.

Anyway, I now carefully bring in the bird food at dusk.

The term of art for bear waste is “scat.” The word, derived from the Ancient Greek σκῶρ (skôr, “excrement”), is the general term for the spoor of wild carnivores. Animal excrement is described by a variety of terms: for cattle, dung; deer, fewmets; otters, spraint; seabirds or bats, guano.

For horses, it’s manure, also called road apples. In 1880, in the age of horse-drawn transportation, New York City had at least 150,000 horses, each generating about 22 pounds of manure daily. The result: over three million pounds daily; over 100,000 tons per year, and 10 million gallons of urine every day. Imagine the smell. The Age of Innocence was more soiled than one might think.

Antrim’s several modern town histories include numerous late-19th and early-20th century photographs of horses hitched to parade floats, delivery wagons for the butcher or the blacksmith, or the U.S. Mail wagon in spring, summer, and autumn and sleigh in winter. For Antrim it was the American Express, not the Wells Fargo, wagon that was “a coming down the street.”

When those photographs were taken, the automobile was unknown or almost unknown, at best something infrequently mentioned in newspapers. Antrim’s farmers still worked their fields with teams of oxen or draft horses. Yet within a generation, say, by 1920, the day of animals in agriculture and in transportation, which had lasted some 5000 years, was drawing toward twilight, even here.

Until the beginning of the 20th century, the U.S. Post Office delivered the mail only as far as the local branch Post Office. Residents then had to pick it up in person, which for farmers meant a long trip to downtown. That was an improvement over the 18th century’s mail carriers’ practice of dumping all the mail for a given town on a table in a local tavern or country store, to be examined by any passerby.

In the 1880s, the National Grange of the Order of Patrons of Husbandry, better known as the Grangers, began lobbying for mail delivery to all individual homes. They were opposed by tavern keepers, merchants, and express companies, each fearing a loss of business. Yet in 1893, thanks to Thomas E. Watson, an eccentric Populist and U.S. Representative from Georgia, Congress enacted into law Rural Free Delivery. It took time to implement. But by 1902, mail was delivered to individual homes across America, and farmers became less isolated from the rest of the world. RFD, by the way, is the most unprofitable service provided by the American postal system.

Parenthetically, Antrim still has a Grange, performing numerous community services that a frugal town government cannot afford and a parsimonious state government will not provide.

During every walk, I noticed changes in things previously observed. The omnipresent gurgle of runoff streams from melting snow flowing into culverts under the road; collapsing barns and weathered paddock fences, suggesting horses had lived there long ago; the numerous stone walls lining the roads and running off into the woods, often for miles and miles. There were once over a quarter-million miles of stone walls in New England.

This part of Antrim had been farm country: a few large farms raising cash crops and cattle, and dozens, if not hundreds, of subsistence farms, where families lived on what they could raise and bartered what they could to supplement their food, shelter, and clothing. Today’s woods are largely second-growth: photographs from the last half of the 19th century show relatively few trees. The woods then had been largely cleared for farmland. The stone walls divided the plots, some very small, worked for the small farmers’ survival or separating a farmer’s cattle from his crops.

Then it ended. Some local historians date the change to as early as the 1830s, when Antrim’s mills first appeared along the Great Brook and the North Branch River. Others hold it began at the turn of the 20th century. I speculate the transition began with the Civil War, when dozens of Antrim’s sons marched off to preserve the Union. For many, used to their parents’ bartering produce for goods, the war may have provided their first exposure to the cash economy. They mingled and talked with soldiers from other towns and states. They saw other towns and states.

To risk anachronism, a World War I hit song asked, “How ya gonna keep 'em down on the farm after they've seen Paree’.” Many soldiers may have come home only to say goodbye and leave for the city. A 12-hour a day job in the mills, six days a week, was easier than the endless, year-round, 18-hour day labor of farming. Without heirs to the land, the farms were gradually abandoned, first to pasture, then to woods. The land returned to nature. Only the stone walls remained.

I went walking late one afternoon, toward dusk. As I approached the intersection of Clinton and Old Pound Rds., an animal cautiously emerged from the underbrush to the south: low to the ground, too large to be a cat, with orange red fur and a long bushy tail. He noticed me and accelerated across the road and into the woods, heading north up Meetinghouse Hill. Later, I checked. I’d seen my first fox.

I turned to go home. Twilight. It was now dark between the trees. About halfway home, I passed the house where lives Tempi, a golden retriever mix who loves to bark at me while wagging her tail.  She was inside. Some rabbits hopped about the property: small, fuzzy, cute cottontails, the kind one’s tempted to call bunnies and leave it at that. They moved just fast enough to avoid me if I was a predator. From the road, there’s a clear view west, past the house across a valley.

Against the blood-red sunset stood wind turbines, their blades slowly revolving, towering some 480 feet over Tuttle Mountain. Some neighbors dislike them; others see them as an essential step in New Hampshire’s transformation to renewable energy. My response is aesthetic: they’re majestic.

I recalled something read in college. Nearly a century ago, the poet Stephen Spender was inspired by the sight of electric transmission towers and lines striding across the English rural countryside to compose “The Pylons:”

But far above and far as sight endures
Like whips of anger
With lightning's danger
There runs the quick perspective of the future.

I walked on. The woods are nearly uninterrupted on both sides of Clinton Rd., past my nearest neighbor a quarter-mile from my house. Suddenly, about 50 feet to the west, something large crashed through the underbrush, heading away from me. Clearly, not a deer, coyote, or fox: they move silently. It certainly wasn’t human: a person hitting trees as hard as this creature would have screamed a succession of expletives as they ran. Perhaps the black bear who had feasted on my bird food was lumbering through the woods. Black bears try hard to avoid humans, except when humans make edible things available, whether garbage or birdseed. Even then, they rarely attack us. They’re completely unlike the grizzly bears in the Rockies, so large that they view humans as just another item on the menu.

Then I saw the lights of my house through the trees. The frogs in our pond were croaking loudly in search of love. I turned into the driveway.

In late April, the Governor of Vermont reclassified riding stables as essential businesses. My instructor teaches at a large stable in Guilford, Vermont as well as her own stable in New Hampshire. She invited me to take lessons there. It was only about 65 minutes away. I accepted the invitation. As Winston Churchill wrote, “No hour of life is lost that is spent in the saddle.”