Why They Suck: Mr. Serra, Tear Down this Wall

Were I Donald Trump, I'd commission Serra to do the border barrier with Mexico. 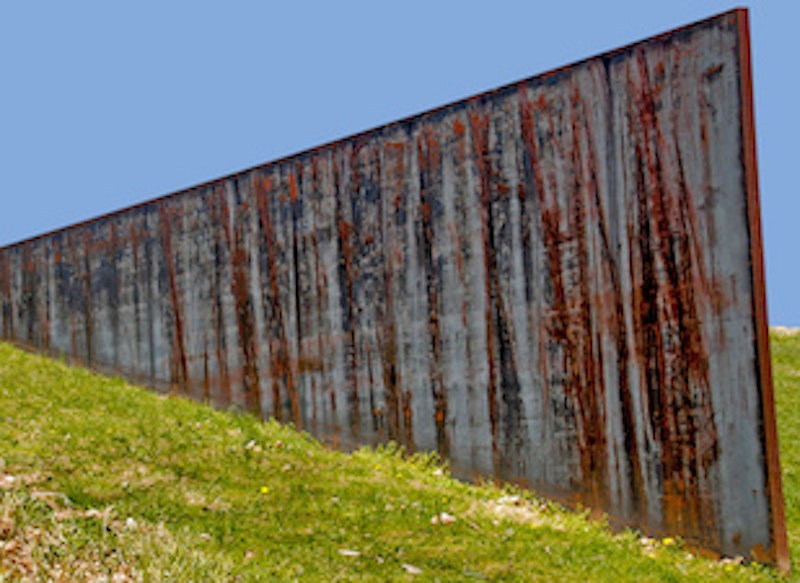 A few weeks ago, on a perfect autumn day, I visited Storm King Art Center in the Hudson Valley. It's as beautiful a venue for looking at art as any I know, featuring large-scale earthworks and sculpture by people like Maya Lin, Andy Goldsworthy, and Mark di Suvero. On this crystalline day, work after work looked amazing: each beautifully adapted to its specific site, each enhancing and enhanced by the beautiful place. Everything, that is, except one by Richard Serra, "Schunnemunk Fork," which looks exactly like all of Serra's work. It’s a rusting steel wall, bringing a pointless, graceless touch of heavy industry or toxic waste or bristling hostility to the bucolic landscape.

People love Serra, or say they do, and often point out that his work is remarkably varied. Some of his rusting steel walls curve, some are straight. Some are long, some are short. Some are installed indoors, some out. Some kind of lean over, some kind of lean back. Serra, it’s widely agreed, has fully explored the aesthetic possibilities of the rusting steel wall. He's the most macho minimalist of all: bringing heavy lifting and extreme oxidation back to the Rust Belt, in works of crushing weight and mute hostility.

One of Serra's many definite ideologies is that his work is site-specific. To move it is to destroy it. However, it strikes me that whatever the site might be, he puts a rusting steel wall there, and it may be that some places are more appropriate than others. For example, were I Donald Trump, I'd commission Serra to do the border barrier with Mexico. It would, as it were, kill many birds—or anything in its proximity—with one wall. It’d be welcomed as an important work of art by an extremely important artist. And it would bristle with such hostility that no immigrant would approach it, only arts patrons.

In 1981, the General Services Administration commissioned Serra's "Tilted Arc" for the Federal Plaza in lower Manhattan. After an extraordinary series of public hearings in which a number of people who worked in the plaza said that it was ugly and in their way, it was removed. One person who testified at the hearing was the philosopher Arthur Danto. Yes, he said, "Tilted Arc" was art. He found a way not to declare it to be excellent art, but pointed out that many critics thought that it was. But that didn't mean, he said, that it was excellent public art. If people really thought it was hideous or inconvenient, it wouldn’t necessarily be wrong to remove it.

A couple of colleges volunteered to house the work on their campuses, but Serra insisted again that to move it was to destroy it, so that it could not be re-situated. Last I heard, it was stored in a GSA warehouse in Maryland somewhere, or the vestiges of it were: according to Serra, it ceased to exist as it was removed from the plaza, and he described the process in Art in America as a murder by dismemberment. It is, however, one thing to dismember a human being, and another to dismember a rusting steel wall.

One of the defenses that Serra and others put forward was that the apparent hostility of “Tilted Arc” toward its site was a political statement; Serra did not just acquiesce to the power of the federal government; he used the cash they provided to critique the institutions of power, to make the diabolical bureaucratic activities going on in the building surrounding the plaza just a little less pleasant.

Now that’s an argument that finds me sympathetic, for I too think that the activities of the federal government should be interfered with by various means, certainly including the aesthetic. However, the fact that Serra took very much the same approach a decade later to the rolling bucolic hills of the Hudson Valley gives me pause. "Schunnemunk Fork" is hostile to its site in exactly the same way as was "Tilted Arc" to its. But here it’s impossible to say why, really. Maybe it’s intended as a critique of Maya Lin's nearby "Wave Field," which Serra may well find too beautiful, too inviting, and too profound. He'd like to bisect it with a steel wall, really.

Is Serra critical of the industrial aesthetic he purveys? Are his walls meant to be barriers, or to somehow constitute a critique of the whole idea of barriers? Is he a Trump trying to keep people out and hem people in, or is his practice ironic and liberating? It's a mark of the sort of work he does that one can say anything one likes about this, and he can say one and then the other. But with regard to the works of Richard Serra there is one thing about which we can all agree: they are, in fact, rusting steel walls.