Why They Suck: Bill Gates 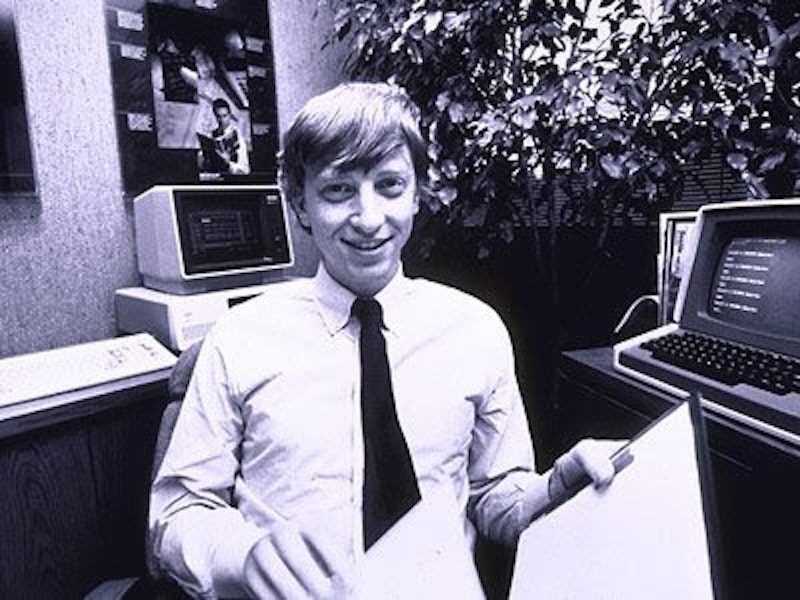 Americans have a tendency to confuse dollar signs with IQ points. With regard to no one is this confusion so confused as in the case of Bill Gates, who’s consulted as a sage on just about any matter. "Bill Gates is a genius and you're not," declared Forbes in 2004, capturing the mood of an enraptured world. I take this as a personal insult, for I believe in my own genius: I’m to the science of Suckology what Bill Gates is to software bundling.

Let me recount some highlights of Gates’ career, which certainly rests on the towering achievement of the Windows operating system. It’s this that’s led to the inevitable comparisons of Bill Gates to Isaac Newton. The way it looked on the screen—the "interface"—was swiped directly from Apple. That irritated Steve Jobs, who filed lawsuits. Gates managed to crush Apple on the world software market, then bailed them out in exchange for Jobs dropping the suit.

Windows—particularly when it was an effective monopoly—was unbelievably heavy and full of bugs, despite coming from biggest software-development operation the world’s ever seen. It teetered for a decade or more on a base of DOS: Gates' incomprehensible operating system (which he did not originally write). It crashed all the time. When the viruses started coming in the early-2000s it was vulnerable. Microsoft became a desperate patching operation.

It wasn’t the only time the genius of Gates was devoted to copying a product from another manufacturer, then driving that manufacturer out of business. The Word program was an inferior knock-off of WordPerfect, the Explorer browser of Netscape, and so on. None of these were better than their sources; all of them shared the vulnerabilities, the slowness, and the underlying irrational arbitrariness of Windows.

The real genius was displayed in creating a monopoly of these inferior products. Gates managed to roll over the Apple OS, in part because of Apple's insistence on not licensing their products to other hardware manufacturers. All the IBM, Dell, and Hewlett-Packard machines came loaded with Windows. And Windows came loaded with Word, Explorer, Excel, and so on. You had to be a programmer to make alternative products work on these machines. People were desperate, creating and crowdsourcing new Linux operating systems and distributing them for free, for example.

And then, if you were writing and exchanging documents with people, they often couldn't read any program except Word or Excel. The fact that everyone's computers came loaded made it the default word processor or spreadsheet and forced everyone into that channel. It didn't matter if you didn't like it, and few did.

The only way any of this was ever unwound, and the only reason we aren't still limited to Microsoft products and have a viable Internet, is because of a series of anti-trust actions, particularly by the EU, and lawsuits filed by the software companies that Gates plagiarized and then crushed. He responded with all the lawyers in the world, but ultimately had to buckle here and there. Otherwise, the superior Apple OS, which people migrated to en masse as soon as they could, would’ve ceased to exist. Otherwise there would only be Windows phones, and Windows phones would be much worse than in fact they are. The Microsoft monopoly came close to smothering the information age in the cradle. It was the enemy of everything it purported to cherish: "innovation," "excellence," the free and useful and easy flow or information.

And then there’s Bill Gates, philanthropist, who wants to let you know about his tremendous, inveterate, and chronic optimism. It's true that he's not just sitting on what was once the world's largest personal fortune; he's trying to help people, which is good. That thing with mosquito nets makes a lot of sense.

What doesn’t make sense at all, however, is turning America’s educational system over to the Bill and Melinda Gates Foundation. For 20 years they've been assembling all the best ideas from the best educators around the world, and what they've come up with is a universal standardized-testing regime in which every student in the country, and perhaps eventually every student in the world, will take an identical test on the identical material: the "common core."

It's full of technocratic solutions to children's brains, but really it's what we might call a classical industrial approach to education, promising to manufacture children as standardized assembly-line products that can be sold to employers such as Microsoft. Gates is still filling his cubicles.

For decades, the Bill and Melinda Gates Foundation has argued, with relentless delusory optimism, that since education tracks income, everyone's income would be increased if everyone had an MA in one of the STEM fields. They’ve spent these decades trying to imagine an “information economy” in which no one in America actually makes anything, but everyone’s in the “service sector” or engaged in information-processing of some sort. Such an economy is impossible overall and it leaves many people out. The model brought us Trump, really, who is a kind of anti-Gates billionaire and another possible demonstration that wealth and IQ aren’t always perfectly correlated.

Reading between the lines of their 2018 annual letter, the Gateses have spent billions in American high schools, and have very little to show for it. They're announcing a whole new approach, which involves "talking to educators across the country to help them develop and implement their own strategies." In other words, they've decided that the top-down quantitative bureaucracy they sought to impose legislatively on everyone isn't working. A little respect for children and teachers as autonomous and creative beings at the outset could’ve saved them all that cash.

I'm wondering just where the genius lies, supposing that crushing your rivals in a way that hurts everyone is not in itself a sure sign. We can tolerate Bill Gates, because we have no choice, and we can hope that his charitable efforts are not all as counter-productive as they have been in the educational field. We can treat the merciless flow of optimism as though it were indistinguishable from silence, and thus preserve our equanimity.

But we're going to have to abandon the comparisons to Newton.