A hopeless future history from 23 years ago. 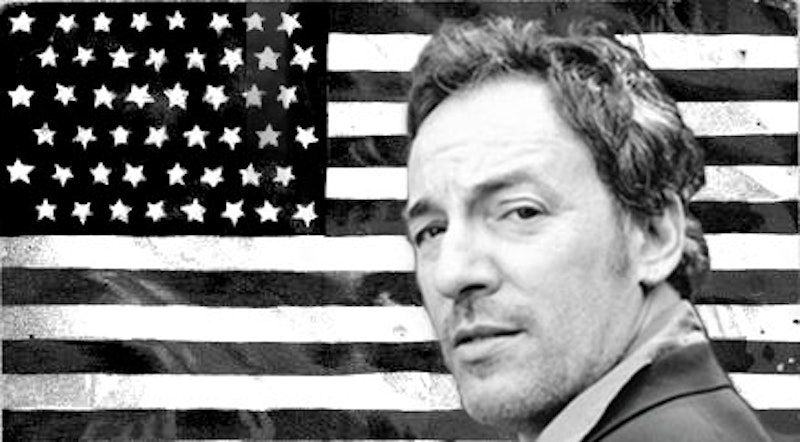 When I was pushing 30, I was many pounds overweight and sat sweating on the floorboards of my room in Queens. It was a hot summer and I dragged my way to and from work by subway. At home I stripped down, and me and my giant thighs settled atop the magazine I'd bought at a newsstand. That could be anything: a skin magazine, The Economist, something new from Condé Nast. I'd glower at the pages, stoned out of my head, and wonder where my future was. Then I'd reach for a notebook and write.

Candidate Springsteen rode in his plane. Somebody with him looked out the window. Below was Ohio, a gray and brown and green strip of earth fathoms away and almost out of sight. The person with candidate Springsteen was a viewpoint character, a narrator. This person would be a rock journalist and quasi-intellectual who had hooked on to Springsteen early and was now riding with him from music to electoral politics.

Yes, I was writing about a future President Springsteen. The idea made me want to apologize, to say that I knew it wasn't “clever.” So I'll do that now. I backed into the idea. I actually spent time thinking about Springsteen, and how he held together his peerlessly humble personality during a career downswing, as the late 1980s were for me, but also for him and so many of his kind in the magazines.

I was hipped on celebrities in those days, in what it took to be one. Celebrities had to be on top; that's why they were celebrities. I thought of Joan Crawford swimming 500 laps a day because that's what it took for her career. Springsteen was the good celebrity, the life-affirming one. He was living life out to the fullest and he succeeded because of that. (Yes, magazines like Esquire ran pieces on this theme, and I read them.) But now it was 1989 and a tilt had come to his road.

My theory: His celebrity nature would assert itself, his need to top others. If he could no longer do it by being a splendid example, he would do it by seeking power. His psyche would have a serious talk with itself, a soul struggle accompanied by visions of penetration and violation, and he would emerge knowing that his life e up to now had been an excuse, a makeshift, a dodge. He was here to command.

His psychic overturn would accompany a shift for the whole country. You had the baby boomers getting older, wondering when life would be the big windfall it was supposed to be. They'd make a collective resolution: anything to force the destinies they deserved. Society would be overturned. Not so much by riot and war, just by a great walking away. I had no idea what form this would take. I was stoned. But I imagined a landscape after the Springsteen era had set in.

Let's say the imaginary year would be 2010. The hippies' hoped-for greening had happened, but it had been led by the middle-aged. Buses rattled along half-empty highways; no cars. Bearded men in their 50s and 60s lorded it over tribal living compounds in Wilmington or Scarsdale. Organic crops were farmed; the bearded men lingered near the teenage girls when leading tai chi. A new order had been approved: Geezers could now get young nookie under newly set up, semi-tribal arrangements.

The air hung heavy; grass split pavement. Global warming had turned out to involve a series of disastrously hot summers. I knew it didn't have to, but I figured it might, and that if it did the consequences would melt current political arrangements. Poor Al Gore (he was around even then) thought that now was the chance: His green credentials would pay off. But he was the eternal loser (we knew even then) and Springsteen stole his following, subsumed it into the Road Forward movement. This was the mass movement of baby boomers looking for some meaning to their lives and some hope for the country. Springsteen had started it after his psychic upheaval; now his midlife crisis became everybody’s, and they resolved it as he did, by deciding their lives were a size too small. Hence the walking away, which I could pin down by at least this much: It involved a much smaller GDP, and far fewer people in office jobs, and much greater, socially approved access to young flesh by society's elders.

The baby boomers (the men, anyway) would have a society made to fit their narcissism, and in return there wouldn't be enough industrial activity to make the earth go pop. That was the great tradeoff, and of course the boomers would pipe about their moral superiority. But there was the dirty bargain, and it was born the night Bruce Springsteen's soul wrestled with itself and decided goodness wasn't enough for a man.

… And at the other end of these thoughts lay a novel that would get me out of having to have a job because it would sell to people interested in a political thriller about a plot to kill President Springsteen while he presided over the great unreining of American society. That novel was going to appear, somehow, in my notebook.

I just had to describe the view from candidate Springsteen's campaign plane as it flew over Ohio. Brown, green, tan. Houses smaller than Chiclets, cars like spilled pills. The whole landscape patiently nosing itself backwards, down so far away as the plane hums.

I puzzled over the description, wrote a page, crossed it out. Tried again; it was very tricky, and I didn't know why I was writing it. But to write a political thriller, I figured I'd better be able to describe a ride on candidate Springsteen's plane. I crossed out the next page.

I wrote a lot more about the Great Unreining and old Springsteen on his throne. Just notes. I pushed the notebook away and lay back on my futon. The air was solid, dark and hot. I fell asleep.

Being 28 was impossible, 1989 was impossible. I worked at a not very impressive job and had dropped out of journalism school, and I weighed so much that every morning my fat was like a surprise all over again. I woke up and the thought slugged me in the forehead: I had to haul all this and not fall down. That would be my day.