Sitting With an Asshole, Waiting for the Rain to Stop

Three scenes that add up to the end of a friendship. 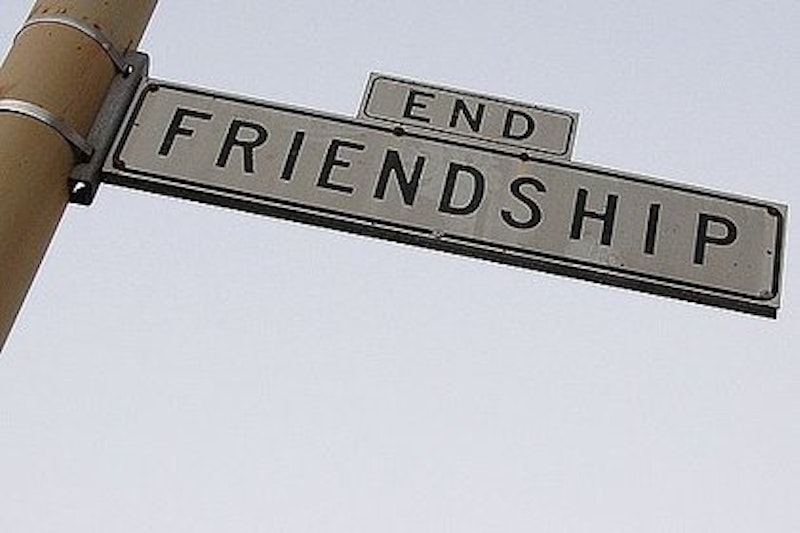 “If you had absolute, undeniable proof that a child was going to grow up to be a rapist and killer and himself rape and kill children, would you club that child to death with a baseball bat?”

“It’s been dripping three weeks and they still haven't fixed it.” Because I'd been talking about my apartment.

“On that child over there,” Marvin says, and he points.

Not pointing. “Use it on that kid.”

“Because how do I have the absolute proof?”

“Oh. You say I have absolute proof, so it's absolute. Like that helps.”

Long pause. “No,” I say. “No, that's not the case. He isn't killing children to keep them from becoming terrorists. He's killing them because they are around terrorists and he believes those terrorists pose a threat to lives here.”

“Based on what evidence?”

“Oh, fuck you.” We had talked about the drones four or five days before. And he had waited and then sprung his trap.

“Absolute evidence? Because I understand that's the only sort the U.S. intelligence community provides. Absolute, hard evidence that is never wrong. That's why we've been so on top of things.”

A week goes by, maybe two weeks. I run into Marvin at the big bookstore, downtown. Actually, I'm on line. My eye is on the cashier because it's been a while and maybe the line is about to move. Marvin appears at my elbow. “Yeah,” he says. “You know. Sorry about that.”

I look at him. I don't want to; I want to look at the head of the line. But Marvin's miniaturized, wizened currant eyes are right there, squinting at me. A crease is on his brow. I'm supposed to comfort him; that's the message I get, somehow.

“The Obama drones,” he says to me. “It's a passionate issue.” That last bit throws me, because now I don't know what he's apologizing for. For raising his voice? He didn't all that much. For lying in wait with a devious trap? But that wouldn't involve being passionate. You don't get carried away into laying a devious trap.

The line's moving. I say, “Hey, with Ohio at 10, who cares?” I shift a little so the big Latina woman and her little sister are a bit more between him and me. Then I break eye contact because a Sandra Brown display is ostensibly blocking us. Marvin gradually takes note that he's standing between people and the door, and he drifts off. He has a slantwise cast to his tiny shoulders, which are bunched up under his jacket.

I guess by this point I'm avoiding him. A couple of weeks go by. I'm sitting at a cafe I sort of like called Broken Gismé, and it's raining outside. The rain is kicking against the pavement. I'm done writing a piece and I want to get home and send it. I don't have my laptop because of the Internet and being worried about wasting time. I don't have an umbrella because my local drug store doesn't sell good ones. And so on.

Marvin's there. The cafe is outside his neighborhood, and this is late morning, when normally he's asleep. But he has wound up in this same former furniture showroom with Indian weaves pegged over the plasterboard walls. Great whales of stranded second-hand armchairs are parked here and there. I'm in one. It turns out he's in another. He finds me.

We're talking. I don't remember how the conversation begins. I'm not even sure if I've finished my article. His black eyes jump from here to there as he makes his points. Having to emote with Tesol students reminds him of Obama's plight in the Michael Lewis article, the President as empathizer. “Really?” I say.

“Quinnipiac,” he says to me. “Quinnipiac hope.” He says this as if coining a phrase, which is a habit with him (both the tone and the phrase coining). He sings, raising his voice just a little, “Quinnipiac ho-o-o-ope, you brace my heart like banner to breeze.” Don't ask me the tune; it was a bit like the one they played for Mighty Mouse.

Marvin settles back, hands folded on his denim knees; he's waiting for applause.

He puts himself into situations like this: eager to step forward, but then trembly and uncertain until he has some applause. This time I don't feel like it. For one thing, I have figured out the meaning behind “Quinnipiac hope.” He means what I said about the poll in Ohio. Which I said just to be pleasant.

So we wait for the rain to end, which can be a damn long time, and that is the last I see of my asshole friend Marvin.