The Lennon Project and Why I Did It

How my college self wasted four months of his life before facing the world. 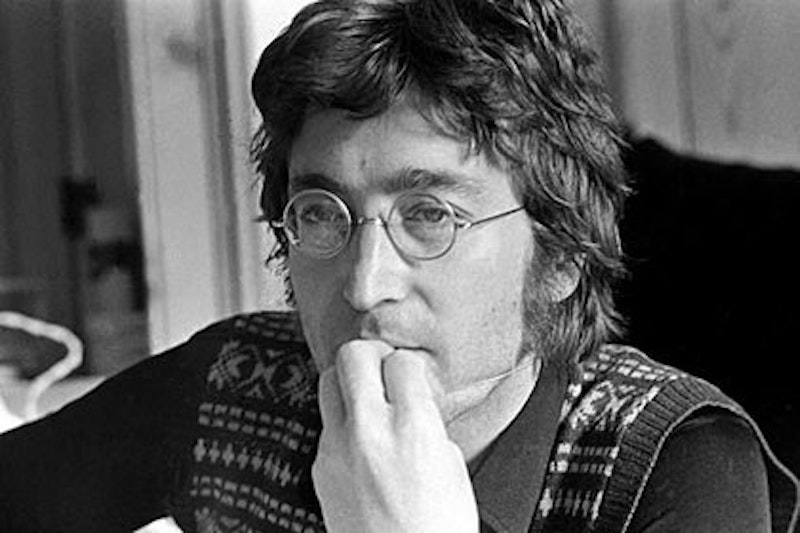 I read years ago that there's a type of person who loves excitement but is too nervous to deal with it. I'm like that. In addition I have a tendency to string myself up rather than take action. In the spring of 1984, for the first time in my life, I was allowed full sway in indulging these tendencies, and the result was life as I lived it during my final semester of college. Basically, I sat around a lot and sometimes worked on a writing project I had set up with a bemused professor.

This project was a psychological interpretation of the life of John Lennon. My face stings when I admit it. My defense just underlines how silly my situation was. I wasn't actually interested in John Lennon. He was a subject from a few years before: high school and freshman year. I dug him out again because I figured he would be a good way to exercise skills. My guiding star was that I was to be a writer, and the accompanying minor star was that I ought to write most days. Here was something I could write.

Reasons: My good papers from college had all reconstructed people from documents they had left; I liked reading diaries and memoirs; a pile of memoirs and interviews had been created by the Lennon craze of four years before, when he had been shot. I could read through them and get out a picture of him and how he thought, and present that with artful prose. It makes sense all over again as I talk about it.

A few catches, of course. First, I had enough credits to graduate. I didn't need this independent project to get me across the finish line. I was there already, and now had commenced hanging about the finish line. I didn't want to go to New York and get a job, for reasons that were evident to anyone who spent half a hour around me: I had trouble dealing with people and the tension they caused me.

The second catch: I could just hang about and write the thing without paying my university a dime. Instead I handed over $5000 or so. That was to have access to a professor, or to the grade he could give me. I didn't want to be a writer; I wanted to be a writer who was told he was good. To make a distinction: Everyone wants praise, but it's another thing to bend your life and pay money just to have a shot at praise. I didn't expect the professor to teach me anything. I barely expected him to pass time with me. I knew my best bet with professors was to stay out of their way; I would never be a protégé, despite the characters I used to read about in Philip Roth when I first came to college. (Again, the tension I felt around people; it's like the mineshaft ceiling hanging over my life.)

Third catch: This prize would itself be second best. I was a History major, and twice I had tried to get it together to have an honors project approved. Twice I had been turned down, with a lot of private psychodrama and agonizing on my side. An honors project means something on a resume. An independent writing project doesn't as much, at least not unless you can discuss the topic without blushing.

Looking back, the project could not succeed, and I could not avoid doing the project. I'd been boxed in somehow. I think this traces back to my refusal to go out and meet the world. Make that first choice, and you may end up in petty Sargasso Seas of fake activity that eat up a few months.

I did finish the project. I think my professor paid attention to this degree: He thought the intro was noticeably better than the main part of the essay. I'd worked that intro pretty hard, put it through a few drafts. The rest of the essay had been labored over, but that's different. I hadn't been sharpening things; I'd been searching around in my pockets for ideas, and then searching again because I had come up short. In the intro I knew what I wanted: something catchy that talked about John Lennon's grotesque, rock-star mode of being, his resentment toward his fans (he had a push-pull with them, a lot of provoking by him and intruding by them), his missing mother, his pseudo-primeval Adam and Eve stunt with Yoko. Looking back, I wish I'd included media overload and the modern global public's dawning self-awareness. At any rate, all I had to do, for the intro's purposes, was drop these elements in and stir them once or twice. Afterward I proceeded to build an argument from these elements, because one is supposed to do that, but my argument was nothing much. Some theory about Lennon's personality and the game he played with himself about mother and baby and soul.

I believe the professor read through it all, because he left occasional margin notes. Not many. Sorry, sir, wherever you are. You earned your money by the brute labor of getting through my prose. I think we both would have been happier if I had done a series of little pieces, just like the Lennon intro. Six or seven pages and featuring well-picked anecdotal items, zingy prose, quick mentions of highbrow themes. At the start of the semester I'd been telling myself I’d do a series of essays about the 70s. (That's the only case where I've been ahead of the crowd: 70s nostalgia.) For example, something about A Chorus Line. Not that I had ever heard or seen A Chorus Line, but what a showcase it must be of 70s themes: personal growth, self as performance, the baby boomers dealing with adulthood. Leg warmers, potted ferns. I might do Richard Avedon: again, not an interest, but a 70s brand, and I wouldn't mind looking at books of photos.

That was the dawn of the semester. Then my thinking went wrong. I believe that I decided an essay was not complete without a grand insight, and that if the insight took a long time to come, then the essay had to get longer to compensate. Yeesh. I should’ve just had fun. I like witty, fast-paced reads; I could have delivered some, given the professor a few chuckles, and then had him pick up the phone to an acquaintance in New York. You know? Magazines or some place, a job at People. Maybe not. But I would have enjoyed myself a lot more.

I spent a lot of time reading magazines when I did my Lennon project. I camped out at libraries and read through their stocks. I spent a lot of time looking at empty campus greens. I sat, very irritated, in the local movie house while A Hard Day's Night played and two people held a conversation a few rows away from me. I was in a very bad temper.

At some point I spent a night and a half unable to sleep, then conked out. The next time I saw my professor, he wanted to know why I had skipped our last appointment. I had no idea what he was talking about. What appointment? He looked at me and dropped the matter. He was a kind-heartened man, I think.