When I Was a Temporary Southern Hippie

Horsing around in Denver. 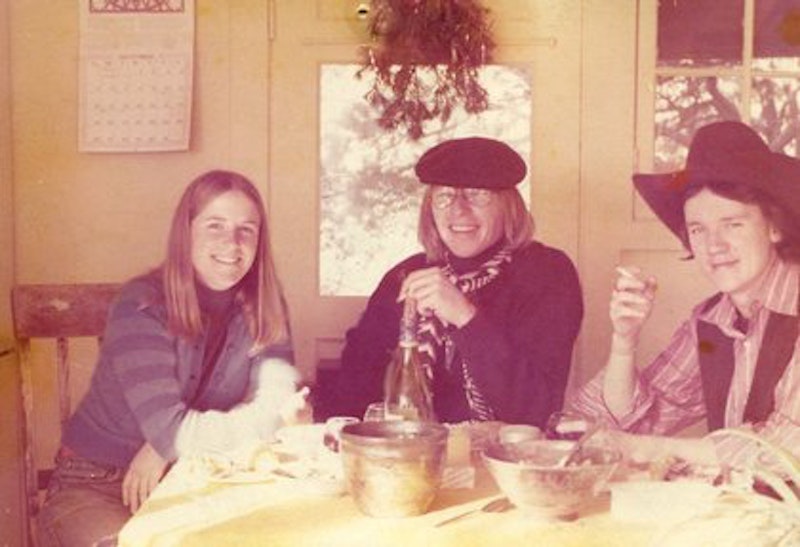 It was mid-August in 1976 and I’d just left my well-paying summer job at The Baltimore Sun’s library to prepare for a semester off from school. That spring, kind of toasted from a rewarding but exhausting year as editor of Johns Hopkins’ News-Letter, I’d applied to a collectively run outfit in Denver called College Press Service (now defunct, but back then it was a marginally profitable organization that over 500 college newspapers subscribed to, for which they received two packets of stories every week) and upon my acceptance to join the rotating five-member staff, I rang my mom to give her the news. It didn’t go over well: she feared I wouldn’t return to collect my sheepskin—not unfounded—and, after a brief to-and-fro, she wormed a promise out of me that I’d accede to her wishes. (And I did: a promise is a promise.)

On the day I left, after a long and boozy lunch at Greenmount Ave.’s splendid Godfrey’s Steer & Beer, a buddy drove me to the airport, got lost, leaving me about 10 minutes to check in, pass through the rudimentary security system (foolishly, I had a dime bag of weed in a pocket, but the guards didn’t even frisk me) and get on the plane. The doors were about to close, the flight was full, but the stewardess allowed me to plop down on the floor, right next to the steerage bathroom. Hard to believe today, but flying really was more civilized, no matter what section of the plane you booked.

My luggage wasn’t much—a Sunny’s Surplus knapsack and a battered suitcase that my dad used in the 1930s—and I looked like a hayseed hippie, with a very short haircut, torn jeans, a string bracelet on my right wrist, a “Maryland is for Crabs” t-shirt and hand-made tangerine-colored cowboy boots I’d purchased in Houston a few years earlier. Taking a break from reading the second issue of Mother Jones—not surprisingly, a far more intelligent magazine in the 70s than the rubbish it prints today—I made a snap decision: once arriving in Denver and meeting my new co-workers, I’d pose as a Southerner from Biloxi, Mississippi. After all, it was the year of Jimmy Carter’s presidential campaign and newspaper articles about the “New South” sprouted up every week, and my thinking ran that it would be a dicey but fascinating months-long experiment. And, immodesty aside, I’m fairly adept at mimicking accents after brief exposure to them. (When leaving Dublin after a three-week visit in ’86, the cabbie asked when I’d be returning home, assuming I was a barrister traveling to New York for business.) As it happened, my freshman roommate at college was a Texan, and after two semesters, as well as a spring break road trip to Alabama, Georgia, New Orleans and Austin, I could fake a Southern accent at will. Still can, if given a moment to compose myself.

Of course, this was no mere parlor trick: I’d have to keep up the charade from August until December, fooling those whom I worked with (and liked) for 14 hours a day. My four colleagues were from Detroit and the Northeast, and were bright, naturally suspicious budding journalists. Our work was divided: in addition to writing two feature stories a week, and a bunch of short items, we each had one other primary responsibility. Helene took accounting (thank God), Alicia solicited new subscriptions, Steve handled publicity and Bill McGraw, my best friend at the very cool two-story headquarters on Gilpin St., and I printed the pamphlets on an ancient Chief-15 offset press. Bill, a gifted writer who went on to a sportswriting/metro/foreign correspondent career at The Detroit Free Press, was a holdover from the previous year, and he taught me how to run the Chief. Once I got the knack, Bill and I would drink $1 blue margaritas at Colfax Ave.’s Satire Lounge, and cook up ideas for our spin-off operation, Agitation Press. One poster had the headline, “Eat the Rich” (I now shudder at the thought that had I been born a few decades later I might’ve camped out in Zuccotti Park in the fall of 2011), with an illustration of a now forgotten corporate chieftain, and we taped them to lamp and telephone poles all over downtown Denver. They made zero impact, but that wasn’t the point.

I aced the Southern accent gambit, which pleased me no end, although on occasion it felt like I was in a Ralph Kramden/Ed Norton routine. When friends from Baltimore called, I had to talk in the open room in character—which really confused those on the other end—and, more perilously, were the drop-ins of two of my brothers. Gary, who was living in Santa Fe at the time, in a humble cottage 12,000 miles above sea level, traveled up in his truck and we all went for drinks at the Satire one Friday evening. Not two minutes after arriving at the office, and observing my ruse, he looked at me like I was nuts, but nothing was exposed. The following Monday—also, after a rendezvous with my oldest brother, who treated me to a buffalo dinner (along with Rocky Mountain oysters and pomegranate tequila cocktails) at the fancy Brown Palace Hotel—Helene arched an eyebrow, and said, “Russ, your brother Gary doesn’t sound like he grew up in the same town as you. It’s like he’s from the East!” Feigning astonishment, I sloughed it off to a mere case of his being older and having the accent fade, and for good measure, threw in that I wasn’t at all pleased that he’d “forgotten his roots.” The indignation won out, and my patter of regional colloquialisms and soft drawl faded into the context of five kids working hard, and for peanuts ($75/wk.), drinking together at the end of day, and advising often-needy student editors at colleges from Sacramento to Maine.

At the run-up to the Christmas holidays that year, I took my leave from CPS and endured a circuitous Greyhound trip (Denver/Cheyenne/Salt Lake City/Reno/Los Angeles/Phoenix/Santa Fe/Houston) and one afternoon, drinking a smuggled six-pack of Coors—smoking was allowed on the bus then, but no alcohol—wrote in my notebook that if only every president-elect, in this case Jimmy Carter, was forced to roam the country via bus he’d be better equipped to run the country. By then, I’d ditched the accent, and daydreamed about starting my own weekly newspaper—working name was The Baltimore Blizzard—an idea that came to fruition the following May. A year or so later, my CPS colleague Steve, now working at a daily in New Jersey, came to visit in Baltimore, and crashed at my dumpy apartment in Mt. Vernon. I spoke in my normal Northeastern voice, and he never said a word about the Southern accent. So maybe I wasn’t so clever anymore—or, more likely, he just didn’t give a shit.