It’s time for everybody to calm down, and wise up. 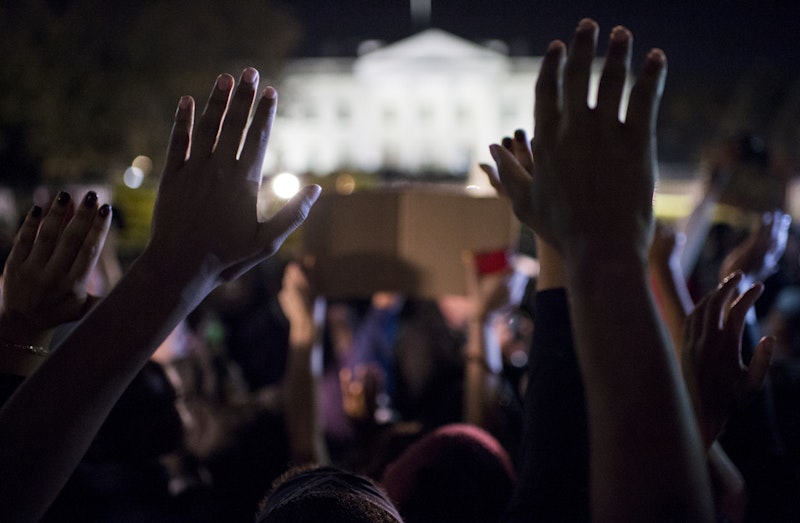 A lot of people are very angry right now, and with very good reason, about a lot of things. Grievances are myriad, and not necessarily invalid: whether one is or isn’t more important or crucial than another is purely subjective. Why should I argue for or against any of them here, and why should you? It’s been done exhaustively, on this site and elsewhere, by professionals, statisticians, and amateurs alike. I’m not writing to denounce factions, point fingers, or fan flames. Not enough journalists are saying what I’m about to say, which is this: the exaggeration of our differences or differentness is a useful distraction from the plundering of our politics, our resources, and our liberties by billionaires and corporations.

To dismiss anyone who says this as paranoid, delusional, or tinfoil-hatted is so easy, and such great sport for so many, largely because thinking too much about this is scary—it’s a lot easier to live in the present and the moment, and to plug into the flashing, sparkly worlds of sports, entertainment, culture and social media. It’s simpler than knowing—than confronting—the reality that across the board, the cost of living has not kept pace with real wages since the 1970s. It’s simpler than remembering—and really considering—the fact that the Supreme Court basically made it legal for industry to buy national elections not long ago. It’s simpler than acknowledging that after the 2008 crash, municipal budgets—for basic services and for, yes, police—have been slashed to hell. It’s simpler than remembering that food pantries and the middle class are more squeezed than ever. It’s simpler than not boycotting a fast-food franchise, a larger enterprise like Amazon.com, or any other business that’s exploiting its workers. It’s simpler than thinking about the ongoing exploitation of our personal data.

Far, far simpler to linguistically garrote anonymous strangers on the Internet than to think about any of the above for longer than five seconds, and to consider what actions might be necessary to address some of these problems on a local or neighborhood level. Perhaps more significant than any talk of environmental calamity in Naomi Klein’s This Changes Everything is its empathy for and celebration of activism in the face of government/corporation collusion, and if the spontaneous national protests in reaction to the deaths of Michael Brown, Eric Garner and others has any legacy, it’s that Americans are sick and tired of being sick and tired. Yes, law enforcement officials have a great deal to answer for at present and for myriad past offenses, but it’s worth noting that, to some extent, law enforcement a) is a tangible symbol/target for a fed-up American polity, and b) suffers, daily, the slings and arrows that polity would ideally sling at higher targets, far out of our limited reach. In short: everyone’s brittle, everyone’s sawed off, everyone’s a powder keg, waiting to blow.

My hope is that protests—peaceful protests—continue, and that authorities look inside themselves to find common cause with the protesters; together, both sides could in this way begin to work towards healing and mutual understanding. My hope is that the protests expand to encompass those elements of our society that seem wholeheartedly intent on smothering it in the name of money. My hope is that most of us can back away from our keyboards, look beyond our own horizons, and fumble towards a big-hearted mindfulness—because it doesn’t take much to reach out to others, if only to strike up a conversation, donate food or a meal to a charity, attend a city council meeting, circulate a petition, start a vegan hardcore band, drive the invalid to vote, or offer an old lady a hand across a busy street.

The cross-sections of society will always have differences and grudges and spats, but bridging those divides becomes easier if we can see one another as people, and that becomes easier if we don’t insist on drawing so many lines of separation. We—the editorial we, the larger we, the universal we, all colors, and genders, and ethnicities—need to open our hearts and embrace one another. We have to take care of each other if we’re going ever going to take the power back, because the forces hoarding that power right now don’t have our best interests at heart, and will not willingly relinquish that power.