What's So Good About Goodbye?

The mixed emotions when your youngest child leaves home for college. 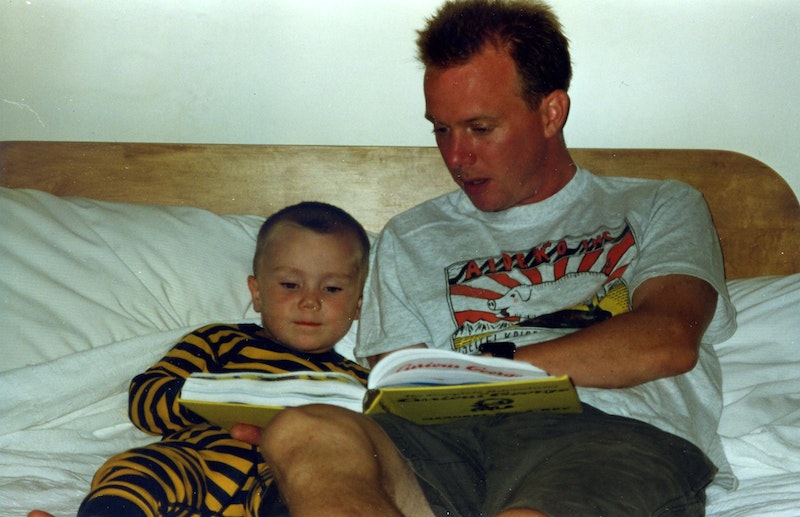 One day last summer, while visiting my brother’s family in Bermuda, our smart-aleck son Nicky, in animated conversation, rebutted a comment by saying, “Okay, old man, I get the point.” Gary laughed, and simply replied, “Your time will come, too, Bubba. And it’ll take about five minutes.” We all had a chuckle.

I thought about that last Wednesday—and countless blasts from the past—when our younger son Booker left for his freshman year at a university in Washington, D.C. In my mind, it really does seem like just a year or so ago when Booker, at our loft in Tribeca back in 2000, took the occasion one Saturday morning to announce that it was “National Toy Day,” and that I’d have the honor of escorting Nicky and him to a few stores of their choice, where they’d pick out items that struck their fancy. I’m a softie, and so a new annual family tradition was christened. My wife Melissa rolled her eyes, but as a doting mom she has her own weaknesses when it comes to the boys. There was the ‘97 summer in Nantucket (Booker pictured above, with our friend Sam Sifton) when we fretted about him getting too close to the pool’s edge. Or around the same year, when, picking up a Christmas tree from a lot on the West Side Highway in Manhattan, Booker fell from the truck and got a nasty and very bloody gash. He was fine, after a quick stop for ice cream, but Melissa was a wreck when she saw him.

Moving forward, it wasn’t so long ago that Booker started rummaging through my CD collection and asked to borrow the Bob Marley, English Beat, Smiths, Zombies and Clash recordings so he could download them onto his computer or whatever device I’m unable to understand.

None of this “empty nest” jazz is unique, of course—every August writers detail their melancholia when the children leave home, and this Washington Post op-ed by Michael Gerson is a real heart-tugger—but it sure was unsettling to us. On the one hand, it’s the natural timeline of growing up; on the other, who wouldn’t want to have your child home for just one more year? Anyway, we sucked it up and hurtled toward his destination just an hour away from our home in Baltimore, and it was actually a lot of nervous fun, gabbing and reminiscing. At one point, looking at the news on my iPhone, I said, “Hey, Bradley Manning was sentenced to 35 years,” which seemed fairly onerous to me. Before the peanut gallery could respond, the fellow who was driving us, an immigrant from Moldova, curtly injected his own opinion. “It should’ve been 60 years for that traitor… in a Turkish prison.” Noted!

Anyway, after several wrong turns—D.C.’s traffic patterns are a mess, the worst city to drive in on the East Coast, save Boston—we pulled up to Booker’s school and a well-assembled group of volunteer sophomores and juniors quickly grabbed hold of his belongings and escorted us to the 9th floor dormitory room that he’ll be sharing with three other students. Now, I understand that urban campuses are tight for space, but was nonetheless astonished (especially considering the obscene way-beyond-inflation-adjusted tuition costs these days, an academic bubble that’s bound to burst within five years) at the minuscule size of his lodgings. My own dorm room, which I shared with one roommate, as a freshman at Johns Hopkins in 1973—ahem, tuition was $2700—was Spartan, all concrete with two bolted beds, and a communal bathroom on the second floor. Good thing I got along with my Texan roomie immediately as we admired each other’s Bob Dylan bootlegs and then smoked joints on the quad with other new arrivals; others weren’t as fortunate.

But Booker’s new home made mine seem like a McMansion: really, what are the chances that four kids, with all their stuff, in a space that made me feel claustrophobic, are going to make it through the year without some serious episodes of unwelcome tension? Then again, maybe that’s just my creaky, comfortable bones coming to fore: teenagers are resilient, excited to be in a wholly new environment, and odds are that any petty squabbles will be forgotten mere hours after arising.

Creature comforts aside, one of the real questions today is about what exactly a college diploma is worth in the 21st century. As alluded to above, the spiraling costs can’t, one would think, continue: too many students taking loans (private or government) take the bankruptcy route to avoid paying the tab, and even those with firmer ethical moorings are… well, fucked for years to come. As a student, my mom helped out with the tuition, and I also held down various part-time jobs to make ends meet, as did many of my friends. When I received my sheepskin I was debt-free; it was a slog, but completely manageable. Had I not started my own weekly newspaper, it’s fairly certain I could’ve done time in the daily newspaper minor leagues for a few years, and then, resume padded, ascend to the then-illustrious ranks of The Baltimore Sun, Washington Post or Boston Globe. (The New York Times would’ve been a real long-shot; I didn’t go to Harvard and was a paleface.) After that, who knows? A buddy of mine at our college paper did embark on the traditional journalism path and now, after a very successful career that included a three-year stint as the Mideast correspondent for The Philadelphia Inquirer, is a highly-regarded editor at The Los Angeles Times.

Okay, my profession’s now in the latrine and doesn’t apply to college graduates anymore. (Those who do hanker for a writing career usually sell their work for peanuts; less than 15 years ago, when I published New York Press, columnists were paid what the market would bear.) But what does a four-year sum in excess of $200,000 at the priciest schools, and still half that at state schools, get you? I don’t have a clue, and that’s why I’ve thought for several years now that the next bubble that pops will be higher education. I’m not sold that online courses will count for much, aside from personal gratification and, Heaven help us, real learning, but something’s got to give. And when the day of reckoning comes at these oases of never-never land, when schools make drastic staff cuts as they lower tuition fees, it’ll be ugly. Too bad my own pocket won’t reap the benefit.