What If Woody Guthrie Won?

Get aboard an entertaining flight of fancy. 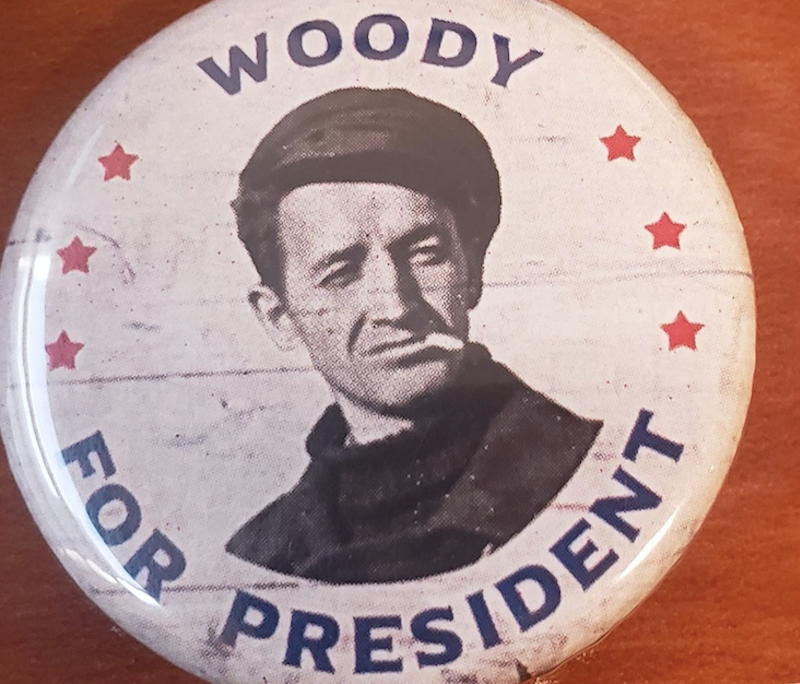 A hypothetical question, far-fetched, yet not anywhere near as what we deal with every election season. As presidents go, Woody Guthrie would definitely be a refreshing change. A fun alternative to what we have now with the so-called leader of the free world. A breath of fresh air to navigating the cesspool septic swamp of useless shitty politicians.

It's a longshot that Woody would entertain such a notion. Considering the fact that he's been dead for over a half century is no consolation either. He’s a natural shoe-in winner. America's first freewheeling genuine champion of the little people. A spokesman for all the downtrodden and forgotten people without a voice. My flight of fancy is a daydream cluttered with wishes for a better world and a mandate for the madness to end. We’d be infinitely better off without politicians, salesmen, priests, hucksters or any public official. They have absolutely no place telling anybody what's right or wrong about any damn thing.

Woody's first official act as president would be to end the office of the presidency permanently. Henceforth from this day forward hereby making it a criminal offense to even utter the name and from this day forth shall only be described as impeached 45. The last and final failure of our broken corrupt nation. The total removal of the name from every public place, abolishing it as a "brand" along with all similar advertising “logo” products like Coca-Cola, Nike or Apple. When asked by reporters how they should address him he replied, "Just call me Woody." Woody would decree all Senators and Congressmen banished, trotting them out for public display to be flogged and humiliated. Relinquish their devious greedy gains from special interest groups and lobbyists and return all the cash recovered to the people.

Third on the agenda would be appointing new legislative members and an Attorney General nominated by the people. The new acting Attorney General is Redd Foxx, who immediately proclaimed no more lawyers, no insurance salesmen and no lawsuits. He totally revamped the police making them all comedians. He also imprisoned the entire administration. The new drug czar was picked by Willie Nelson and Keith Richards to be Lenny Bruce, whose first official law was a proclamation legalizing all drugs and he appointed Hunter S. Thompson and Timothy Leary as his spokesmen around the world insuring only drugs of the highest quality be available free to all who want them. From this day forth all medical care shall be provided free to everybody and covered by the trillions of dollars slashed from the military budget.

Next on the list would be breaking down corporate monopolies, bust up and shut down big banking, frauds and scams. No more bailouts and paydays for CEOs or VIPs allowed across the boardrooms in the country. They're banished and exiled to live with their frozen off shore accounts. Wall Street will become the new location for Barnum & Bailey’s Ringing Brothers combined circus and Coney Island will be designated as the new capital of the country. Washington D.C. will be turned into an amusement park. The billions that went to pro sports would now go to the arts, music, and feeding the hungry. They can still play ball but only for a living minimum wage. Tickets for all sporting events will be $5. All schools and colleges are now free. All these institutions will be supervised by ambassadors and curators. For instance Albert Einstein, Nikolai Tesla and Stephen Hawking will work with our brightest scientists, professors and medical experts to oversee the cures for cancer, AIDS, tuberculosis, leukemia and the current pandemic. The Three Stooges, including Shemp and both Curleys, Laurel and Hardy, The Marx Brothers and W.C. Fields will work together under the guidance of George Carlin, Mark Twain, Charlie Chaplin and Will Rogers. Rodney Dangerfield will be in charge of the Postal Service. Joe Pesci and Jimi Hendrix will appoint musicians, poets and artists to help major metropolitan cities and towns to run smoothly. Dolly Parton, Wanda Jackson, Patsy Cline, Minnie Pearl, Marty Stuart, Glen Campbell, George Jones, Hank Williams, Johnny Cash, The Sex Pistols and hundreds of others will help the farmers with songs and money.

Woody Guthrie, the philosophical hillbilly tramp poet, hopping trains and riding the rails. Rambling through every Hooverville, hobo jungle and migrant farm camp. A lonely hitchhiker blazing a trail bound for glory. A wayward drifter chasing the heart of the country, watching from a train or through the windshield of an 18-wheeler. Why would he waste a precious moment being the president of anything? The one storyteller’s talk about in the annals of broken American dreams. He stood for a land where a man can stake claim to prosperity and justice for all. Guthrie would spin in his grave; possibly even jump right out of it if he saw the daily shit reality show today.