Woodside's prominent relics from the old days are right there in plain sight. 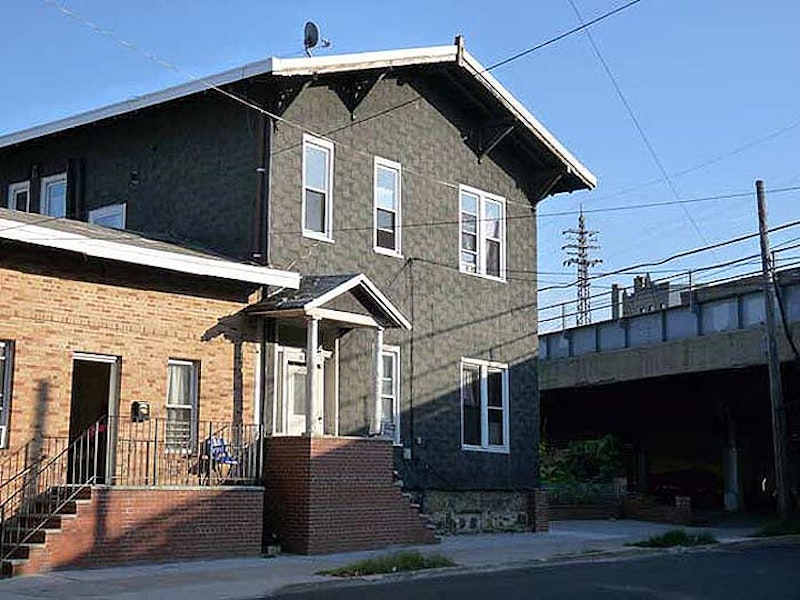 Woodside was largely a woodsy swamp until the mid-1860s, when developer Benjamin Hitchcock purchased the John Kelly farm and divided it into building lots located along today’s Woodside Ave. Kelly, an early settler, was part owner of a Brooklyn newspaper and sent it dispatches from his home in the “sticks” called “Letters from Woodside;” Hitchcock perpetuated the name. Woodside took off when the Queensboro Bridge opened in 1909 and the el arrived in 1917. Woodside’s strange street pattern, with some streets angling for seemingly no reason, has to do with its old railroads: the Flushing and Woodside and Flushing and Northside Railroads, as well as the Long Island Rail Road, all ran through Woodside. By the late-19th century, the railroads had either failed or absorbed by the LIRR. The surviving roads, absorbed into the LIRR, were elevated by 1917.

Today in Woodside you’re just as likely to exit an Irish bar and enter an Indian restaurant as you are to walk out of a bodega and then past a remnant of the colonial era. Woodside has succeeded in hiding in plain sight some of its more prominent relics from the old days, too.

Above, at the corner of 58th St. and 39th Ave., beside the railroad overpass west of the LIRR Woodside station, is a shambling, two-story residence that gives just a little hint of past grandeur. For several decades, this was a hotel that sat beside the railroad tracks, which were at grade when the house was built in 1882.

The hotel was constructed by German immigrant John Meyer, who arrived in Queens in 1877. He gained employment as a bartender/manager at a local watering hole called the Woodside Pavilion, which still stands as an unprepossessing private dwelling with white aluminum siding and brown window shutters, a block away at 39th and 57th. Meyer intended to become a saloon owner/hotelier and had Meyer’s Hotel constructed for $10,000 in 1882, with then-modern amenities private baths, running hot and cold water, modern kitchen, barber shop, and a livery service. Much of the cost went into sumptuous appointments such as yellow hardwood pine floors, black walnut moldings and paintings by renowned local artists.

Meyer was not around long to savor the hotel’s success, dying of a heart attack in 1887. His widow Katherine remarried, to George Shreiner, and kept the business going as the Katherine Meyer Hotel, which was later taken over by John E.A. Meyer, John and Katherine’s son.

As the decades went by Woodside was losing its rural aspect. The city was coming to Queens, and the LIRR eliminated its grade crossing and added extra tracks to its main branch, which wound up passing in front of Meyer’s Hotel. A massive elevated trestle was built over the building’s front gate. John E. A. Meyer closed his father’s hotel in 1917, the year after the trestle opened, and it became a two-family house. It’s likely that the current residents have no idea the place used to be one of the jewels of Woodside hospitality. 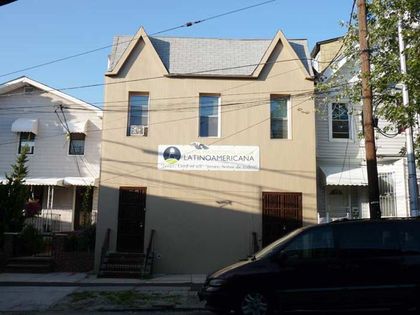 Next door to the old Meyer’s Hotel building on 39th Ave. is the former home of the Woodside Hook and Ladder Company. The fire brigade, formed in May 1878 as Newtown Fire Department Company #3, originally built a firehouse on Woodside Ave. and 60th St., but outgrew what was a small building and raised the money to build a new firehouse on Riker Ave., now 39th. The new firehouse was dedicated on November 17, 1884. The building came to be known as the Truck House or Firemen’s Hall, and became a community center next to the then-handsome Meyer’s Hotel, hosting community fundraisers and socials.

As early as 1895 Lutheran services were held in the building. The fire company was disbanded in 1913 and the Truck House has had many diverse uses since then, serving as a post office, and American Legion Hall, and currently, a non-denominational church serving local Spanish speakers. 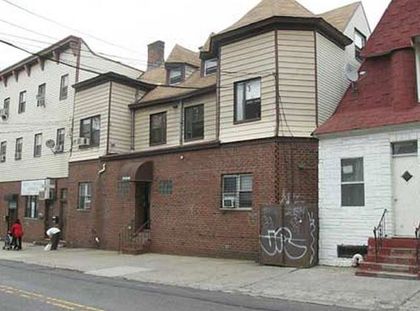 Other than the grocery on the corner of 38th Ave. and 58th St., the stretch of 58th St. between 37th and 38th Aves. is unrecognizable as the commercial strip it used to be. The east side is lined with tile and marble wholesalers, electrical contractors and other service enterprises. As you get toward 38th Ave., though, there are several low-rise buildings of considerable age that are hidden behind layers of aluminum siding. Many of the buildings go back to Woodside’s first phase of development in the mid-to-late 1800s.

This building at 37-53 58th St. is one such building, and you can tell that it used to be somewhat grander in aspect. There are two turrets, one flat on top and one with a conical peak, and a couple of dormers on top. “Good bones” as architecture aficionados put it.

When first built, it had a tailor shop on the street and residences upstairs. The tailor shop was owned by Prussian immigrant Otto Groeber at #58 5th St., which during the 1920s acquired its current address. Groeber also purchased property around the corner on 38th Ave.; he operated the tailor shop with his family until his retirement in 1918 at age 91.

On the left was a meat market called Stern’s and a dry goods shop (today’s five and ten). A pharmacy was to the right of the tailor; Groeber’s name was inscribed on the picture window. 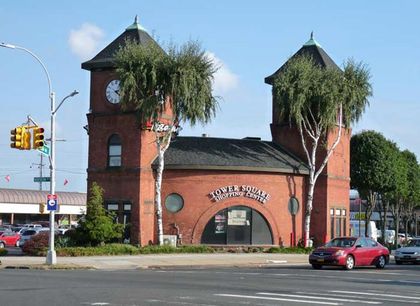 There are other relics in Woodside, but none quite as obvious as the former trolley barn belonging to the New York and Queens Railway Company at the pivotal intersection of Northern Blvd. and Woodside Ave., the border of Woodside and Long Island City.

William Steinway, the scion of the piano manufacturing family, electrified his Long Island City streetcar line, the Steinway Railway Company, and hooked up with developer Cord Meyer’s Newtown Railway Company, which extended to Corona, in 1894. Two years later, the lines reorganized as The New York and Queens County Railway Company and built a handsome, twin-spired brick depot at Northern Blvd. and Woodside Ave. Trolleys would ply these roads to Queens’ eastern sections. Steinway had tried to extend his trolley line to Manhattan via two tunnels under the East River in 1892, but financial and engineering problems stymied the project. Steinway’s friend, banking tycoon August Belmont, completed the tunnels in 1907, but they didn’t gain regular use until 1915, when the Interborough Rapid Transit modified them for subway use. The IRT built the Flushing Line in increments, finally reaching Main St. in Flushing by 1928.

Meanwhile, trolley service out of the New York and Queens County Railway depot continued until September 1937, when buses took over. The eastern end of the building was torn down in 1930 after a fire. Over the decades, the old trolley barn was deserted and was in danger of demolition until it was preserved in 1987 as part of the Tower Square Shopping Center. The north tower’s clock again works, and at the arched entrance you can still find “N.Y. and Queens County Ry. Company” and “Waiting Room ” emblazoned. A short walk down Woodside Ave. under the Amtrak tracks at 37th Ave. will bring you to a corner laundromat; walk around the corner to find yet another “New York and Queens County Ry. Company” relief.