What I Felt on the Late Bus Home 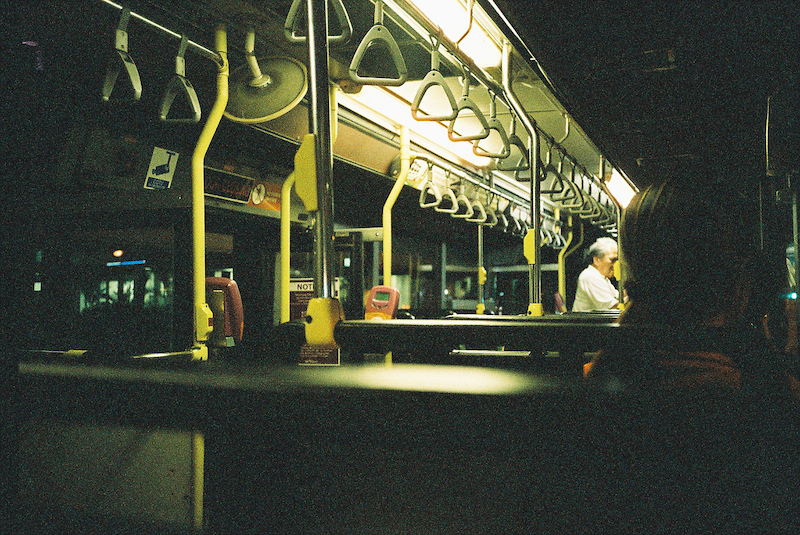 She remembers that marijuana is legal in Massachusetts now and smirks a bit. How legal, exactly? She pulls up Ballotpedia and finds out that as of December 15th, anyone in the state can have 10 ounces and six plants in their home. She idly wonders if a white trans girl starting a grow op to raise money for trans people of color’s name changes and hormone costs counts as dismantling or reinforcing systemic whiteness.

Ideas like that are important, she knows. Now, more than ever, she’s acutely aware of her whiteness and what that means in America. Waiting for a late bus home, she’d been approached by a white man, from his accent a Brooklynite to the bone. He recommended the train over a bus; she declined his advice politely. “What’s your name?” he asked. She froze; something in her said not to answer. She couldn’t think of a fake name and felt suddenly guarded about her identity.

He’d yelled something over his shoulder, but her ears listened only for the squeak of the approaching mass transit tin can that would take her home. As he stumped away, she pulled out her phone, poked it awake. How many people in Kings County had voted against Clinton?

Not many; about 122,000, maybe five percent. She still remembers seeing that nearly two-thirds of white men nationally had gone for Trump. (Eventually, she’ll probably laugh at the fact that she’s included in the minority of that generalized statistic because of her legal gender marker.) Math isn’t something she can reliably do now, she reflects numbly, but she’s pretty sure that still means there are five digits of white male Trump supporters in her general vicinity. Had that stranger been one of them?

She tucks her phone away. Her other hand grips the pink tube of Mace in her jacket pocket.

The bus pulls up. Swinging into a single seat to limit physical contact with others, she tries to ignore everyone else. Her thoughts drift to her new, nebulous plans for activism, accompanied by prayers that she isn’t biting off more than she can chew. Already she’s been talking with cis and trans women about how to mutually maintain access to birth control and hormone therapy. Last week she was editing an essay about how Halloween episodes of television are objectively the best part of any show.

Facebook is loathsome but necessary. She hasn’t stopped looking at it since election night. Months ago, she’d become aware of something that came to be known as “zucking,” a practice named after Mark Zuckerberg wherein a trans person’s Facebook account would be reported and shut down for violating the site’s “legal name only” policy. Yet because of its ubiquity, she grimaces, trans activism will be compelled to use the infrastructure already in place on an unfriendly network to reach workers, allies, and those in need. It will be a balancing act. She scrolls.

A friend tells hir most recent tale of slurs thrown in hir direction. She’d mostly processed it when they were eating dinner earlier that night at a gathering of queer and marginalized people, but it’s still a shock to see it in cold black type. Fervently, she wishes she were still there, eating vegan macaroni and cheese and decompressing over a 1999 Korean crime-farce movie. Instead, she’s alone in a pill full of bodies and fluorescent light, hurtling through the city night.

Arriving home, she blearily realizes she’s supposed to be on a call about social media in less than eight hours and has a pro wrestling recap video to co-host in about 12. It’s all feeling somewhat hollow. She imagines sleeping in her makeup and arriving unadulterated at the office. A short, bitter chuckle. She’d rather die.

The quiet settles in around her shoulders. In the back of her mind, a scream builds.