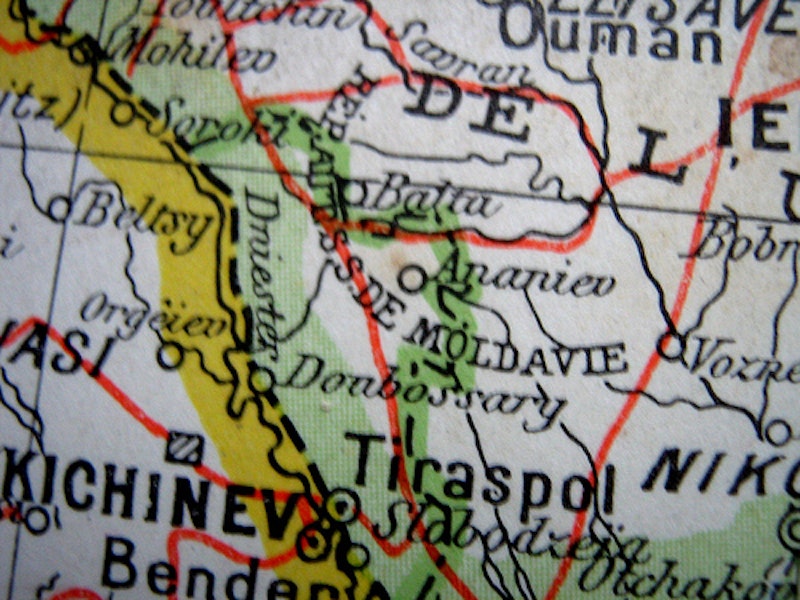 There comes a time when people need to take a good, long look at themselves in a bus station mirror, brush aside the months-long fuzz that has accumulated on their face (or I guess their legs, if the person in question is a woman) push aside the comforting answers and easy retorts, and ask themselves, straight up, the hard question: What the hell am I doing in Moldova.

Nestled between the Ukraine and Romania, Moldova is the kind of country you need to repeat two or three times when describing your itinerary, and even then your audience is likely to remain skeptical, half-believing the state in question is fictitious. Those who’ve heard of it likely know it only as the poorest and most corrupt country in Europe, not exactly a stirring reason for a visit. Moldova is historically a piece of Romania accorded to the Soviet Union as its westernmost territory under the Molotov-Ribbentrop Pact. Though that accord didn't go exactly as written, in the aftermath of WWII Moldova nonetheless found itself beneath the heel of the Russian Empire, languishing behind its relative to the south-west, though Nicolae Ceauşescu's paradise was itself not a hotbed of cultural and economic development for the latter half of the 20th century.

It is probably fair to say that Moldova's progress post-fall has been less than dramatic—it holds the rather dubious distinction of being the only ex-communist country to have re-elected a communist government, albeit under somewhat suspicious circumstances. Moldova currently operates in a curious political no man's land, without an active executive or ruling party, a situation someone seemed to be unhappy with, as the week before I arrived a grenade attack during a local festivity in the capital city injured nearly 40 people.

It is not a tourist mecca. The Moldovan girl who sits next to me on the bus starts to stumble pretty quickly when I ask her about top sights in her hometown of Chisinau. “Mostly it's just a very green city,” she says, “with white houses.” Not exactly Rome. I went to Moldova because it's close to Ukraine, and seeing as how I was already there it seemed no terrible difficulty to take a quick detour and get another stamp on my passport. But given that my reason for visiting Ukraine was its proximity to Belarus, and my reason for visiting Belarus was because it's only short distance from Vilnius… well, you can see where this is going. Flipping through a map a few months ago this little side trek seemed a lot more appealing. After seven hours on a bus from Odessa (including a wildly enjoyable 45-minutes spent in a small room refusing to bribe a Ukrainian customs official) I'm beginning to wish I had adhered a little closer to the beaten track.

There’s no overwhelming reason to visit Chisinau, its capital city, unless you're Moldovan yourself, in the flesh trade or feel like picking up some surplus ex-Soviet hardware. It's famous for its wine, (famous might be a strong word; a more accurate statement would be “it is known for it's wine”). At the risk of sounding cruel, most of its major architectural attractions would not make it onto a tourist map in some of the cities I've been. I don't want to knock it too gratuitously; there is certainly many a major American metropolis to which it could legitimately claim superiority—Pittsburgh, for example. Lord knows it's a hell of a lot better than Pittsburgh, though on the other hand I've never traveled 5000 miles to visit Pennsylvania's second city.

As a cultural oddity, it has more to recommend it. I don't know what percentage of the population is involved in illegal activities, but I guess it's high enough to keep the BMW dealerships in business. For a population making, on average, $250 a month, there are an astonishing number of luxury good stores. There are more moneychangers, accepting a wider variety of currencies, than anywhere else I've ever set foot. Why so many? Your guess is as good as mine, but mine is very good and it involves the Moldovan propensity for smuggling and organized crime. These marks of conspicuous consumption share the streets uncomfortably with the most miserable poverty, elderly grandmothers sitting on street corners hawking produce and knick-knacks and astonishing numbers of cripples begging for spare lei.

It's a pleasant enough blur to burn a few days in, particularly given that a good dinner here costs about $15, including booze. The Moldovan people are friendly —although not “amazingly friendly,” as the guidebooks say. But they're nice enough, particularly in contrast to the seething hatred that seemed to be the stock emotion of most Ukrainians I bumped into. Also, the Moldovan language (which actually is just Romanian with a heavy accent) is rendered in Latin, and after a few weeks of Cyrillic you can't overstate the degree of joy one gets from not having to mentally stutter through masses of ж's, ф's and ы's.

But what can you do? Getting off the beaten trail is not so easy these days. Perhaps there was a time when Prague was an undiscovered metropolis and Buenos Aires a lost paradise, but if so I don't live in it. The masses have pretty well staked out all the good places—all that's left are the crannies, the far-flung and badly run, the corrupt and backward, where everyone is trying to leave, where the powers that be are too foolish to appreciate the potential of American money or too incompetent to set up a tourist kiosk to take advantage of it. Such is Moldova.