Ukraine: Too Cheap To Be True 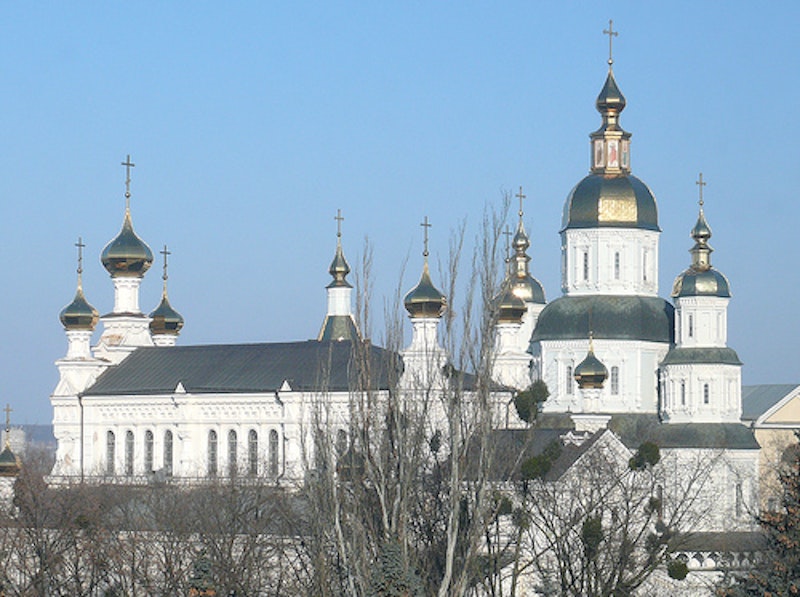 As I've noted earlier, living in the U.S. it's easy to conceive of Eastern Europe as a monolithic conglomerate of ex-Soviet sprawl, occasionally enlivened by bits of U.S.S.R. kitsch and the unceasing activity of frightening, bearded Mafioso. A few weeks here demonstrates conclusively the absurdity of that opinion. Estonia combines a faded medieval grandeur with the technological savvy and closely woven social fabric of Sweden. Latvia and Estonia are distinctly Western European countries, set by the unfortunate whim of geographical and historical circumstance to have had their social progress stunted by their proximity to the Soviet Union. Poland is, well, Poland, as unique from the rest of the world as the moon is from the Earth, as any Pole worth their vodka will tell you.

I had to come to the Ukraine to have my expectations met. It is a vast and well-populated country, cursed (as is the rest of Eastern Europe) by its proximity to its much vaster cousin. Some millennia ago it was the center of the Kievan Rus, the birthplace of Russian culture before its destruction by the invading Mongols. Its 70-odd years under communist rule went as well as it did pretty much everywhere else, which is to say badly and, like Belarus, it had some difficulty letting go of that whole totalitarian state thing.

The overturning of its rigged election in 2004—immortalized to Western-eyes by the fleshy jowls of Viktor Yushchenko [http://www.chinadaily.com.cn/english/doc/2004-12/11/xin_22120111225961676152.jpg], his fine Slavic face eroded by (it is rumored) the poison of his Putin-financed rival—sadly did not usher in an era of cotton-candy and ice cream, and Ukraine still struggles with the corruption, crime and poor-living standards it did before America deigned to notice (briefly) its existence.   A Belarusian I met on the train corrected me on the correct geographical category in which to place the Ukraine. "It is not Europe," he said emphatically. "Belarus, Ukraine—they are Russia's little brother." And indeed there is a Scythian wildness to be found here which one does not bump into further north and west. This was clear enough five minutes after I left the train station and headed into the metro, packed tightly in layers of fur-coated flesh, descending into the bowels of the earth down a several hundred meter escalator. A half-kilometer underground I notice another curious Slavic touch: The walls and ceilings of the underground are domed, like the interior of an Orthodox church, and covered with eastern Frescoes, two-dimensional and depicting shining-eyed, solemn saints.

From the layers of trash that line the streets to the absolutely execrable pop music blasting from every cafe, the threads of European sensibility (detectable even beneath years of Soviet detritus) I found in the Baltics and further west are definitively absent. For the first time in my travels I begin to get seriously wary of the people around me and the dark alleys I turn down, a precaution I take doubly seriously after my host warns me that at the small international school he works at, no few of his fellow faculty have been the target of random attacks by passerby wishing to convey their dislike of foreigners. Though I never become the victim of a beating, I am not exactly greeted by the Ukrainian populace with overwhelming kindness. The natives are—I hope this is not overly blunt—intensely unfriendly, scowling at me for the arrogance of depositing some small amount of change in the local economy.

We ain’t in Krakow anymore.

The people aside, Kiev is quite lovely, a bustling metropolis combining everything you might want in an Eastern European capital. A stroll down Andriyivsky Uzviz reveals a fine old town of a kind alien from that I'd run into in the Baltics. Its main street, once the emblematic of the sort of grandiose totalitarian architecture Kim Jong Il would be a big fan of, has been utterly overrun with clothing boutiques and electronic stores. Though I’ve never been one for communism, there's something sort of depressing about seeing all of these People's Monuments be turned toward crass commerce—like going to a strip club lodged in a former church.

Probably the best thing about Ukraine, to be absolutely honest, is how almost laughably cheap the place is. After months spent on bread and water, being able to eat out twice a day is an almost blasphemous luxury, and one I still feel a little bit guilty doing. But then again it's hard, and even a bit pointless, to concentrate to closely on frugality when everything here is dirt cheap. One day I decide to cut the bus fare and walk from the center of the city to my host's house. Doing the math in my head on the way back I realized my half-hour of self-denial saved me a grand total of 40 cents. I don't really even have a conception of how little money that is—I wouldn't pick up 40 cents if I saw it lying on the ground. To the best of my knowledge, there is literally no product within the United States that can be purchased for 40 cents. The notion of buying something with it harkens one back to the days of settlers buying molasses on credit from the local general store, and cutting up silver-dollars into slivers to give to their eight pioneer children on Christmas.

After the bustle of Kiev, Odessa seems distinctly placid. Probably its most famous spot is the long flight of stairs where the famous scene from Battleship Potemkin was filmed, now called (appropriately enough) Potemkin's Steps. This might have been a big thrill to Mr. Lingan and his ilk, but having never actually seen Battleship Potemkin they mainly just looked like stairs. A lot of Odessa was kind of like that—I imagine someone would enjoy it, but that someone wasn't me. Granted its nominally a summertime destination, perched as it is on the black sea—but the fact that their main public beach rests in the shadow of a half-dozen hundred-foot high cranes resting in the nearby harbor, I can't imagine it will be giving Acapulco a run for its money anytime soon.

Visiting the Ukraine I've come up with a new metric by which to judge the societal advancement of a given country. It's a simple one, and doesn't require any complicated calculations or knowledge of a nation's GDP and unemployment rate. Essentially it works like this—walk out the front door of your hostel, and count the number of wild dogs scavenging out of the trashcans. On one end of the spectrum you have the U.S., where Bob Barker's lifelong crusade against dogs getting it on has been more or less successful. On the other you have a sort of Mad Max-style wasteland, where roaming packs of Labrador retrievers fight for the carrion of their former owners in the ruined shadows of major landmarks. I'm calling it the Polansky Wild-Dog Scale of Civilizational Decline, and it's not too early to start funding my research institute, if there's any willing philanthropist reading this. Ukraine is closer to America, but on the other hand it's yet to experience an apocalyptic disaster, and claims to be a functioning country. In Kiev most of the animals have probably been run over by late-model Mercedes, but Odessa has more than its fair share. And they're never anything cute; no dachshunds or Dalmatian puppies or something similar. They're universally mutts, unfriendly mutts at that, mutts that look like they were the bastard offspring of a pit bull and a chain link fence.

Ukraine is the first place I've visited I probably wouldn't go back if you asked me, and that isn't a great thing to say about a country. It isn't really fair to write off a place you spent barely a week in, but seeing as how it would require sedatives and a straight jacket to get me back, I think a week will likely represent the sum total of time I spend in its environs. In short, though it seems unlikely tons of you reading were planning on taking an 18-hour flight out here to visit the wild East, don't come to the Ukraine. There's a reason it’s so damn cheap.