Historian Norman Davies' book, Vanished Kingdoms, tells the loser's side of the story. 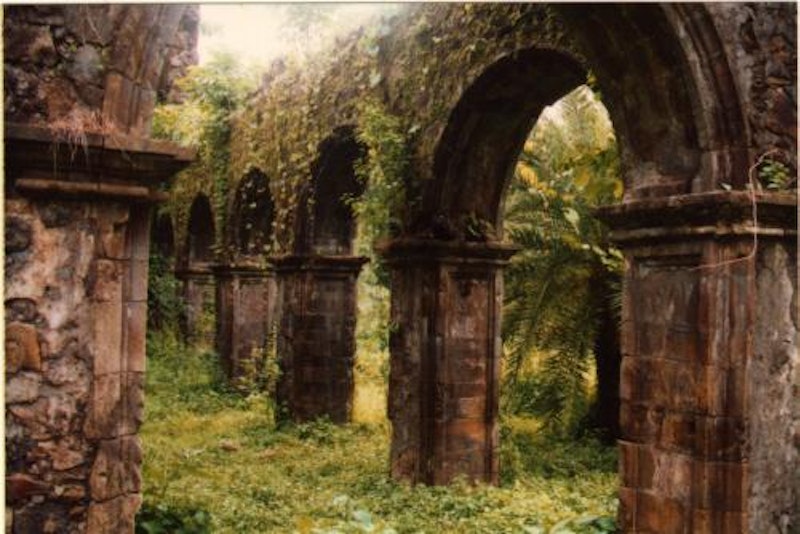 States live and die according to the processes of history. Some survive for centuries, while others are snuffed out in a day. Those that last produce historians. It’s said that history is written by the winners; the truth is that it’s written by survivors. What happens, though, if we look at history through the lens of the forgotten? If we try to perform the imaginative act of resurrecting old nationalisms, dead traditions, the states that are no more? What connections do we see, and how do we re-imagine the countries still living in the world? How can we still be certain about the persistence of our homelands?

Historian Norman Davies has taken up this challenge in his new book Vanished Kingdoms. It’s a collection of essays about European countries that no longer exist, beginning with a 5th century Visigoth kingdom in what is now France, and ending with the USSR. These are case studies of nations that lived and died―and, in some cases, were later revived. Technically, the title’s something of a misnomer; for example, the USSR was no kingdom, Byzantium was an Empire, and Saxe-Coburg was an independent duchy. But all them have vanished, in various ways, and that is what matters here.

Most of the essays have a three-part structure: Davies considers the physical remnants of the countries - the geography that remains of what once was, then outlines the history of the former state and finally considers the historiography that followed the vanishing—the memories and myths of the state, the glowing half-life of a vanished kingdom, decaying with time. There are exceptions to this structure. The chapter on Byzantium, for example, is essentially an extended musing on the tendency on Western European historians to insist on drawing a distinction between Rome and Byzantium, and the way by which “byzantine” has become an opprobrious adjective. The concern with perspectives on history links the piece to the rest of the book, though. Davies is not only concerned with what happened in the countries that no longer exist, but what we think about what happened and why we think that way.

The book can’t help but have political relevance at the present moment. To think of vanished countries is to imagine possibilities by which they might have lived longer, and thus to call into question the inevitability of the states that have succeeded them in our own time. More, to raise the specter of the death of European states at a point when Europe’s racked by an economic crisis is almost to insist on the possibility of contemporary countries passing away. Davies treads lightly on this point, but much of the book can be read as an interrogation of the nature of a state as opposed to a nation; how political constructions can become part of a national tradition, or how traditions can choose to reject certain political interludes.

Montenegro and Estonia were independent countries in the early 20th century; now, in the early 21st century, they’ve become independent countries again, after long stretches as part of other, larger countries. On the other hand, Etruria, created in the north of Italy by Napoleon in the early 19th century, is almost forgotten even by the descendants of the people who lived in it. There’s no taste for an Etrurian revival. Countries, unlike most living things, can come back from the dead―but only if they never quite die as a concept.

Davies’ examination of the varied kingdoms is well-written, though terse. Occasionally he has to move too quickly to fit his essays into a reasonable length, and therefore has to jump over too much territory. That’s especially the case in his piece on Prussia, where a couple of particularly fascinating centuries are skipped over in a couple of pages, with merely a recommendation of another book to look at for more detail.

Still, there’s enough matter in each essay to make the general point that Davies wants to argue. For each piece, Davies argues from the perspective of the vanished state, pointing out other possibilities, other ways to look at what we thought we knew. There’s a constant, and typically engaging, sense of the author’s personality and position; Davies editorializes when he thinks it necessary, but his arguments are well-constructed. Overall, his approach emphasizes the polemic aspect of his book. This is history used for a purpose.

That purpose being, I think, to insist on the multiplicity of history. Imperial powers are often presented as the core of history, the drivers of the world. Davies points out that this is only a habit of thought. He argues, for example, that World War II was principally a battle between two different totalitarian systems, and that the tendency in some countries to think of the war as a victory for freedom obscures another perfectly valid reading which sees the war as essentially a victory for the Soviet Union.

Perhaps even more relevant is the way in which he later presents the history of the Soviet Union itself. His essay on the USSR is framed from the point-of-view of Estonia; we see what it means to have been on the borders of the Soviet Union, to have been caught between the Soviets and Germany during the war, what totalitarianism looked like for one of the Soviet Republics on the periphery of the Union, and finally how things looked as the USSR imploded on itself and Estonia re-emerged as a state in its own right.

The point isn’t just that there are many ways to remember the past; it’s an argument that certain pasts are easily forgotten because they’re politically inconvenient. Whole countries can be forgotten. And the more complex a reality, the more difficult it is to remember, and to reconstruct all the factors that made up that now-vanished reality. Davies’ essay on Galicia ponders the difficulty of creating a museum for the dead country: “The fact remains that the sum total of current memory-making leaves much to be desired,” he says. “The rich, multi-layered legacy of Galicia stays in the shadows. The kingdom ‘as it really was’ remains at best half-forgotten or half-remembered.”

The book is in a sense a struggle against inadequate memory-making, and an insistence on the multi-layered. The essays begin to overlap more and more as the book goes on. We see connections between the different kingdoms, and also connections with core elements of European history―the Roman Empire and the Holy Roman Empire and the Teutonic Knights and the Habsburg clan. Family trees proliferate, we see how states link to other states and how European thinking on the nature of states and on international law develops over time. How marriage becomes a tool of policy; how lineages firstly shaped polities, and then how polities began to dictate which heirs would marry which heiresses. And how republicanism and nationalism and communism all shaped the way people thought about governments, and states, and kingdoms.

Davies does occasionally try to look ahead into the future, and imagine the death of a currently-existing country. One can argue with his specific argument, but not the general drift of his thinking. It’s somewhat shocking when Davies tells us: “That the United Kingdom will collapse is a foregone conclusion. Sooner or later, all states do collapse, and ramshackle, asymmetric dynastic amalgamations are more vulnerable than cohesive nation-states.” This seems to me to be debatable, given the long history of the Holy Roman Empire, but that’s not the point. “Nothing implies that the end will necessarily be violent; some political organisms dissolve quietly,” Davies points out. “All it means is that present structures will one day disappear, and be replaced by something else.”

For Davies, the trend toward decentralization in the UK is a symptom of the kingdom’s decline. Residents of countries where much greater powers are given to the regions―Canada, say, or Switzerland―might disagree. But his broader point is that all the political powers we now think of as unarguable realities will, one day, dissolve or be replaced just as the Kingdom of Aragon or the Kingdom of Savoy were. And that’s unarguable.

Davies makes clear that states can pass through many changes in their lives and deaths. The convoluted history of the many polities named Burgundy is proof of that. But almost every kingdom he looks at has its roots in some other state; they are each the product of a specific transformation, developing out of some other kingdom, existing for a time in one or more configurations, then passing away, occasionally later to revive. Sometimes the changes seem organic, developing from within; sometimes it seems forced, a product of conquest from outside. But change itself seems inevitable, and something we forget at our peril.

That’s ironic, given that by definition a state is defined by its relationship to power, and hence its ability to resist change. At one point Davies illustrates a point by giving reader opinions from pre-World-War-I German nationalist Heinrich von Treitschke: “The State is a law unto itself. Weak nations do not have the same right to live as powerful and vigorous nations.” Also: “The end-all and be-all of a State is power, and he who is not man enough to look this truth in the face should not meddle in politics.” One has the feeling that Davies rejects the determinism implicit in Treitschke’s statements, and perhaps agrees more with Dante, who he quotes in another context: “For one nation rules and another languishes/according to [Fortune’s] hidden judgment,/hidden like a snake in the grass.”

There is an element of fortune in the histories Davies describes. Almost always, as he describes events, things could have gone differently. The vanished kingdoms he writes of collectively insist that the history we know was never predestined; that we are the outcome of chance, not of certainty. Politics and power are shaped by certain givens, yes, but nobody sees every snake lurking in the grass; nothing is certain, however much it might seem so.

Perhaps as a result, Davies’ conclusion, “How States Die,” is unsatisfying. He lists five ways by which states meet their end, but provides no real unifying factor among those five causes of death. Nor any hint of how to see their symptoms and prepare for the end. The actual causes themselves are simply enunciated in a few pages. It feels like a capstone’s missing; as though, after all the fascinating matter of his book, there’s simply nothing left to say.

Perhaps there isn’t. Or perhaps the conclusion really comes much earlier, about halfway through the text, when Davies observes that: “All the nations that ever lived have left their footsteps in the sand. The traces fade with every tide, the echoes grow faint, the images are fractured, the human material is atomized and recycled. But if we know where to look, there is always a remnant, a remainder, an irreducible residue.”

This is his theme: the reclaiming of the residues of the past. And the reminder that sometime, and perhaps sooner than we think, all we know will be nothing more or less than a residue itself; that all power will dwindle to footsteps and broken images.