When we’re trying to be sui generis—the “author of ourselves,” in control of our own biography—dying is a fearful prospect. 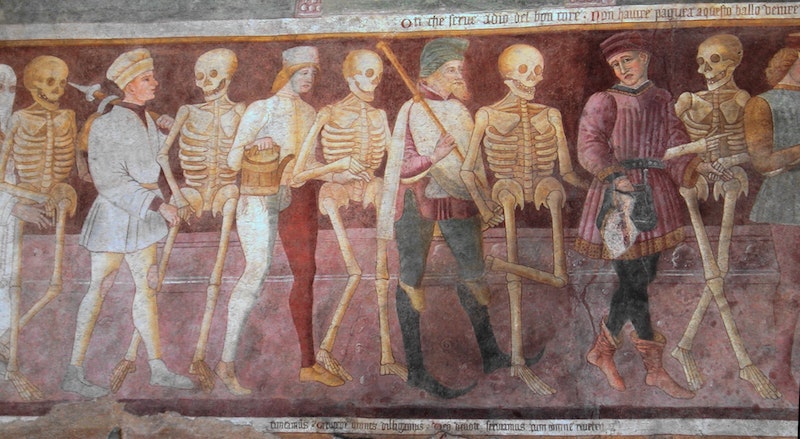 Twitter recently advised me of a user account I might want to “follow back.” One of my close friends, the bot reported, was already following this guy. It would ordinarily have been a reasonable suggestion. In this case, however, my friend stopped being a reliable curator of Twitter several years ago, when he passed away. Death cut him down so fast that loose ends like his “active” Twitter account still turn up once in a while.

The French philosopher Jean-Paul Sartre described death as an affront. As long as we’re alive, Sartre observed, we are free and conscious actors. We are capable of anything, including radical alterations to our lives or ambitious new endeavors. Then we die. At once our life ceases to be our own. Its possibilities are extinguished, and coherence sets in. We end up as grist for the dull, edifying stories that biographers tell.

In other words, our death confers new meaning on everything that precedes it. Thus William Wordsworth’s life reads as a long, fearful decline into sentimentality and reactionary thinking because he stuck around for 70 years. Jim Morrison, meanwhile, has become a cautionary tale of a completely different sort because he died young. He might well have lived. Can you imagine it? Morrison would’ve become another cherished, incorrigible rock icon praising life’s rich banquet, a la Keith Richards. Why are Robert Mapplethorpe’s photos currently more agonizing and poignant than Patti Smith’s discography? Because of death’s clear, bright line.

When we’re trying to be sui generis—the “author of ourselves,” in control of our own biography—dying is a fearful prospect. We don’t want to be undone by an ignoble, undignified, or premature death. Michel de Montaigne takes the subject up early in his first book of Essais, with palpable anxiety: “Fortune sometimes seems precisely to lie in ambush for the last day of a man’s life in order to display her power to topple in a moment what she had built up over the length of years.” Regardless, like a drunk man deaf to his own train of thought, Montaigne then stubbornly affirms that “all the other actions in our life must be tried on the touchstone of [a] final deed...When judging another’s life I always look to see how its end was borne... and one of my main concerns for my own is that it be borne well.”

Most people probably stop here to recall those famous lines from Charles Dickens, whose book A Tale of Two Cities owes Montaigne such a debt: “It is a far, far better thing that I do, than I have ever done before; it is a far, far better rest that I go to than I have ever known.” They are Sydney Carton’s last words: death redeems him, as everyone knows.

As for me, I prefer to meditate on lines written by Monty Python’s Flying Circus about Joseph of Arimithea:

ARTHUR: What does it say?

MAYNARD: It reads, 'Here may be found the last words of Joseph of Arimathea. He who is valiant and pure of spirit may find the Holy Grail in the Castle of aaarrrrggh'.

MAYNARD: '...The Castle of aaarrrrggh'.

BEDEVERE: What is that?

MAYNARD: He must have died while carving it.

MAYNARD: Well, that's what it says.

ARTHUR: Look, if he was dying, he wouldn't bother to carve 'aarrggh'. He'd just say it!

GALAHAD: Perhaps he was dictating.

I think one can paraphrase Joseph of Arimithea like this: “The location of the Grail is unclear to me at this time. I am going to die without finding it. The purpose of my life, it turns out, is bearing witness to the search. Hear me: people before you went out in search of the Grail, and they were still looking for it when they died.”

After all, how many attempts to understand life have been ruined by Isaac Newton’s fatuous remark about standing “on the shoulders of giants”? That’s not the real relationship between an individual and the undertakings that shape his life. Instead, great accomplishments from the past are merely allegories for what we, the living, might be able to do. What concern us are the things our predecessors got wrong, and the projects they had to leave unfinished.

Enclosed in the mysterious finality of death is life’s own quarrel with itself: death is banality writ large. It’d foreshadowed by every single pause, error, detour, and dereliction of duty in the course of our lives. To wit: it was a hot summer day in July, and Percy Shelley was exhausted. He had reached a good stopping-point. His poem “The Triumph of Life” was turning out to be a dialogue between himself and “a Voice,” a ghostly presence who leaves a macabre procession of ghosts to play Virgil to Shelley’s Dante. Meanwhile, the other ghosts continue “seeking to reach the light which leaves them still/Farther behind & deeper in the shade.” They pantomime the work they once did, “not the less with impotence of will.”

The Voice speaks to Shelley about Life with supernatural authority. “I have fallen by the way side,” he moans, but “strength & beauty... abide.” Shelley asks the ghost, “Then, what is Life?” The ghost answers, “Happy those for whom the fold / Of—”

Shelley paused there. He had an appointment with his friend Leigh Hunt, who was also living in Italy. He sailed to nearby Lerici, where he and Hunt apparently discussed their forthcoming journal, The Liberal. Shortly thereafter, during the return trip by boat, he ran into some kind of trouble and drowned.

He drowned—so “The Triumph of Life” ends abruptly, mid-sentence. The ghost never delivers his grail of an answer. Yet because of his unforseeable death, Shelley’s poem happens to be a perfect work of art, exactly as written. It evokes light, and shadow, as one whole, complete.

—This essay was inspired by Michel de Montaigne’s 19th essay, “That we should not be deemed happy until after our death.”