Mass Shootings and the Stories We Tell Each Other (and Ourselves)

I don't even know what I feel. 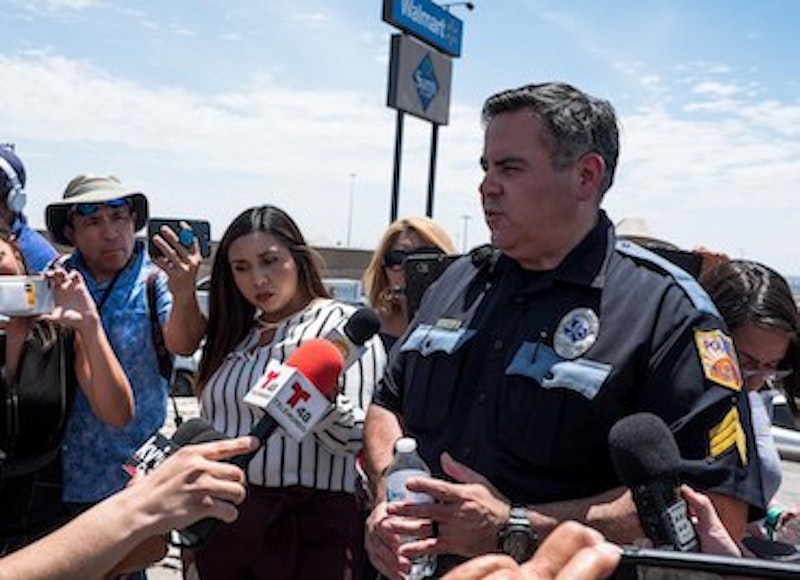 I no longer know what to write the day after mass shootings like the ones in El Paso and Dayton. That's not in itself a real problem for anyone, even me, but it's the sort of problem we've all got in some form: how do you express anything interesting, clear, wise, useful, real about such events? How should you respond, and can you respond that way, and how do you actually respond, the 30th time around? How sincerely are you or ought you to be moved or altered by deaths elsewhere, to which you have no direct human connection, but that feel overwhelming, or significant? "Another mass shooting in America. When we will wake up?" I don't know how to pay attention to that headline anymore. But it's wrong to be that disconnected. But if I started crying, there'd be no reason ever to stop, and I need to go to work Monday.

I don't even know what I do feel, much less what I ought to feel. At this point, it's really weariness; I'm not going to start sobbing; I'm going to try not to shrug as I think, "Fuck, another one (and then, another one)." I might force myself to read about the details or watch it all on CNN this time. I might not though, and I don't know what good it's doing me or anyone else to try to share the victims' pain at this distance, if that's even possible. I'm not sure that I can deal with how fast people are going to try to make it meaningful or turn it around into something positive, again: how the community is pulling together, how heroic the first responders were according to themselves and local news, how we'll use this to motivate our fight against guns, or racism, or mental illness, or an unregulated Internet.

Human beings, it’s often said, are story-telling animals. We’re extremely good at making meaning: at detecting meaning in any series of events or if necessary conjuring it from nothing. We do this in order to understand, but we do it also in order not to understand, to take something gigantic and jagged and box it up and ship it off so that someone else can worry about it. The motivations behind the various political readings and counter-readings of such events are not only political. They make the event meaningful by simplifying it, sometimes into a single word or concept: "guns," "toxic masculinity," "social media," "Trump," "racism," "the culture." Once you've tacked the word onto it, your interpretation flows into socially-approved forms. You have something to say. And then you can put the infinite excess of the event itself—all that death, all that damage, everything that happened in the life of the shooter and the people around him—aside, and in some fashion continue with what you were doing before, which you are also no doubt obligated to do.

None of these stories, or a dozen others, is false; each of them is partial. And each obscures as much as it reveals. Each performs an essential function specifically by its concealment of various aspects: it allows us to persuade ourselves that we've grasped the whole thing when we haven’t, at all. Now we can put it away, or drop it into its pigeonhole. And then we do that over and over, so that you wake up in the morning, see the devastating headline, and then just drop it into whatever container you've made or bought for it, and head out for Sunday brunch. At brunch you shake your head and say another one, it's so sad, it's so outrageous, have you seen Once Upon a Time in Hollywood, God it's another hot one out there.

You can't stop your life, really, if you're not directly connected. Then again, who is connected to whom and how? In my own head I'm more connected to "Americans" than other people around the world, many who faced violence of one sort or another over this last weekend. But I don't really know what that connection means, so I guess we'll need stories about that too.

Only a monster could be entirely indifferent, or just give a shrug and go on. But aren't we all monsters at this point? You don't want to appear to be that monster, even to yourself. But how much can you care for how many people how often for how long? How much empathy would it be right to have, and how much could you possibly have without being entirely disabled? And how much empathy would it be right to express, whether you feet it or not? And how can you screw your sincerity up to express it? By "you" I mean "I" or "me," of course.

The coverage of events such as those this weekend in El Paso and Dayton inevitably forges a narrative as quickly as possible, which unfolds in a ritual pattern. They identify the shooter briefly, and then try not to say his name after that; the names of the perpetrators are becoming a taboo. Then expose his thinking through his social media posts and enumerate the victims and make their lives into two-sentence stories. Pick out a hero: one of the dead who tried to stop the shooter, or a policeman who engaged him. Rummage around again for the meaning, and offer you the words: "guns," "social media." And you already know what you yourself are going to say next time, don't you?

I wish I could feel events like the shootings in El Paso or Dayton fully; deep inside I think I have a moral obligation to, even if I can't explain why that should be, exactly. But I also wish that I could just be entirely indifferent to them, even as I worry that I am. Or maybe I've just finally gotten to the point where I know that I've got nothing to say that’s real and that could help, where I'm basically just bewildered and trying to fend off despair. It's not worthwhile to say anything, really, I convince myself. But, like you maybe, I find that I have to keep trying to say something.