My mistake with Julio. 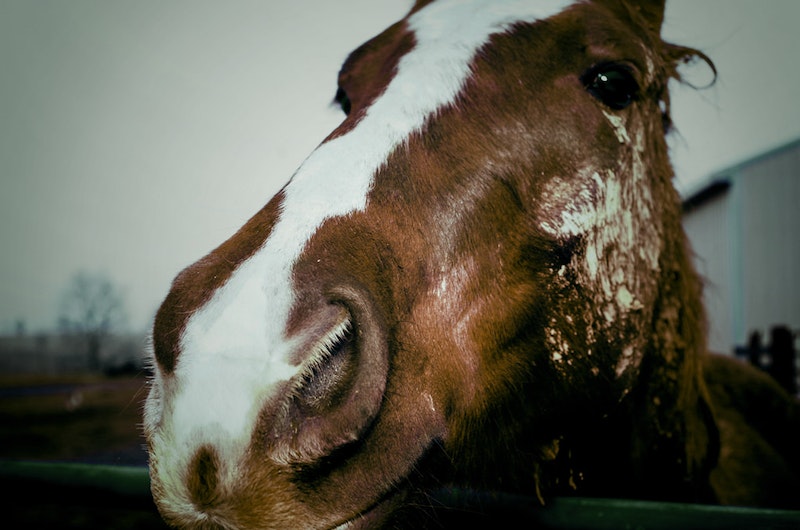 Hilaire Belloc, who’d ridden with the French horse artillery before going up to Oxford, wrote a poem, "The Winged Horse," with a refrain I find oddly stirring:

On Friday, September 1, I was trying to turn Julio, the horse I ride weekly in Stoddard, New Hampshire, when we came to a temporary parting of the ways. He wanted to go one way and I wanted to go the other. I’d swiveled in the saddle, shifted focus toward my goal, shortened my reins, and turned his head. Then I made a mistake. While pressing my left leg to his side, I leaned over as well. I should’ve merely shifted my weight by a fraction of an inch. The saddle moved, I fell from the horse, and, as Brough Scott, a British horseman turned prize-winning journalist wrote of his own similar experiences, “The ground came up to meet me.”

Julio didn’t throw me. It was my fault.

“Pride goeth before destruction, and a haughty spirit before a fall.” I’d taken pride in riding Julio precisely because he was obstinate. If I could master this horse, I thought, I could master any horse. I admit that I should’ve more fully absorbed my trainer’s teachings on turning a horse. Perhaps too, in the moment, I should’ve considered whether my slight irritation at Julio’s reluctance to comply with a reasonable command, reasonably expressed, was interfering with my judgment.

I lay there for about 30 seconds in some discomfort. If this had been a boxing match, Julio would’ve won the belt. The trainer ran over, seized the horse, and moved the saddle back into place. I felt I had to remount immediately. I picked myself up, apologized to my trainer for my mistake, took Julio’s reins, and walked him to the mounting block. I put my left boot into its stirrup, and hauled myself aboard. I was unable to find the right stirrup and my trainer took care of that. Then I took Julio to a walk, and then to the trot.

For the first time in the months we’ve worked together, I got him completely around the track at the trot. Perhaps I communicated something of my postlapsarian emotions to him. Thereafter, we walked and maneuvered around and about traffic cones to develop my steering skills. Then I rode him to the stable, dismounted, led him inside, and secured and groomed him. After putting on his fly mask, I led him out and removed the bridle. He walked toward the pasture, snorting as if to say “What a sap!”

By this time I felt tired and achy but I cleaned the bit and the girth, put his tack (saddle, bridle, reins, bit, girth, saddle blanket, etc.) back in the tack room, and swept up. Then I went home.

I occasionally wear a posture support to combat my scoliosis, particularly when writing. For the first two days after the accident, when I was up and about and wore it, I was in no particular pain. So I downplayed this accident as bad luck.

In the early morning of Labor Day, while in bed, I began having spasms in my lower back whenever I moved my arms or legs. At times, the pain was so intense that I cried out. So, later that morning, we went to the local emergency room. There was surprisingly little traffic there for a holiday weekend.

My x-rays showed no fractures. So the physicians and nurses believed my problem a severe muscle sprain. During the examination I had several painful episodes, which embarrassed me because I was raised to think that pain should be endured, not displayed. Not in this case.

So they gave me a shot of something that took the edge off, a prescription for a potent painkiller, and the same advice that my trainer had given me by email about stretching, staying active, and checking with my physicians if the pain hadn’t gone away in a few days.

I hope to see Julio on September 12 at three p.m., health and weather permitting. Or, I might take my wife’s advice and ask for a less difficult horse. It’s an interesting question: Julio is not malicious, and he likes children and they love him.

Perhaps our personalities aren’t made for each other. J.E.B. Seely, a British cavalry general, argued that with infinite patience one can gain control of any horse. Perhaps Julio lacks patience for my inexperience. Perhaps I lack patience for his obstinacy. Ours may not be a marriage made in Heaven.