Unanswered Questions in Enemies Within 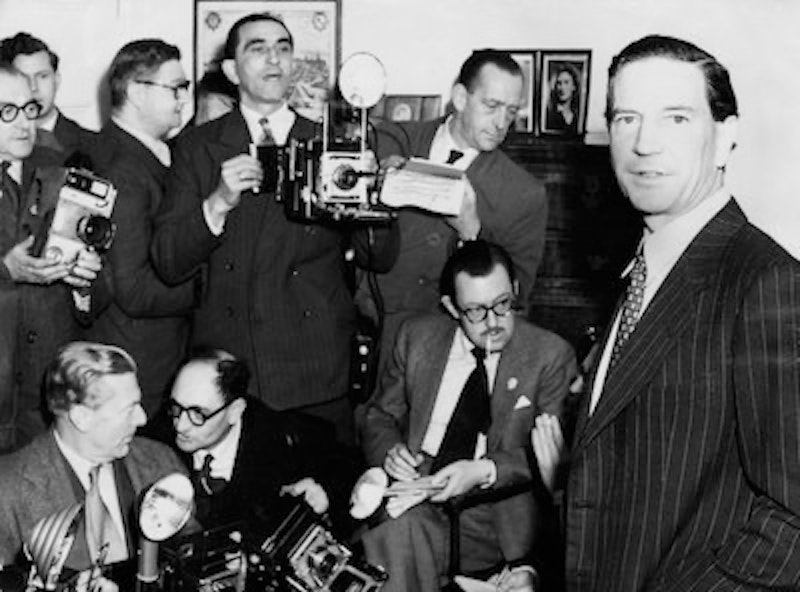 The story of the Cambridge spies exposed in the 1950s is a fascinating one: five men, members of the British Establishment, turn out to be Russian agents, and while some elude capture to take up new lives in Russia, others remain in the UK after secret confessions to the authorities. As espionage stories go, it’s also well-documented, sometimes by the spies themselves. Richard Davenport-Hines examined this story again, in his new book, Enemies Within. His stated aim is to discuss Kim Philby, Donald Burgess, Donald Maclean, Anthony Blunt, and John Cairncross less as individuals than as the products of a system and of institutions. Their history would then be the history of those institutions, and, as Davenport-Hines establishes in the introduction, the history of a loss of trust in and within institutions.

It’s a fascinating idea, even if it does occasionally sound like an old-school aristocratic Tory lamenting the rise of Margaret Thatcher. Unfortunately, Enemies Within doesn’t do a good job of fulfilling its promise. Although packed with bits of bright information, its structure is rudimentary. Davenport-Hines writes well, but provides little in the way of a conceptual framework to support a long book.

The first third of Enemies Within barely mentions the Cambridge spies, instead giving a brief history of the Russian and British intelligence services, and presenting some case histories of Russian agents in the United Kingdom. The second section gives a reasonably detailed examination of the Cambridge five, with several digressions. The third section examines the effect of the spies, not so much in terms of what information they actually provided the Soviet Union, but in how their exposure affected Britain. This part of most directly attempts to fulfill the mandate Davenport-Hines sets out. Unfortunately, some of the flaws that mar much of the rest of the book hamper this final third as well.

Let me pause to note that in attempting to describe the history and mentalities of institutions Davenport-Hines has set himself a difficult task. How does one go about this? By sociological analyses? By quotations from people who were a part of the institutions? Or from those on the outside who interacted with them? Or, instead, by giving biographical analyses of some of the individuals who made up the institutions? Enemies Withinopts mainly for the last of these methods. Boarding schools, Cambridge, the British intelligence services and Diplomatic Service, these things and more are illustrated through brief anecdotal descriptions of individual people. I found this approach insufficient on its own, often obfuscating the book’s structure rather than clarifying a point.

Too much of what Davenport-Hines provides may be interesting in its own right, but irrelevant to what he wants to get across. At one point, an argument that Cambridge produced more informants for the USSR than Oxford leads to a nearly page-long description of an MI5 agent at Oxford. It’s not badly written, but an example of the odd editing choices of the book—the anecdote doesn’t really illustrate the main point.

Generally Davenport-Hines has a good eye for what facts are interesting. He also has a good ear for quotes, and integrates them into his text efficiently: the actual words of the people he writes about are chosen well, and bring them to life. Overall the book’s well-written at the sentence level.

Some of those sentences could’ve been eliminated, though. The theme Davenport-Hines wants to build, of an erosion of trust, comes across only in fits and starts. Even in the last third, he avoids using sources that present any kind of statistical analysis of how people in the later 1950s (and after) felt about the British government and British Establishment. There are no opinion polls cited, no extrapolations from other data. Only individual stories, which are unconvincing as a way to make a larger point about a society as a whole. Davenport-Hines may be accurate, but the way he tries to prove it in Enemies Within is insufficient. If he’s right, it’s almost by coincidence.

Davenport-Hines mentions a shared racial and ethnic sense, but not how the very existence of that shared identity affected the governance of an Empire that had more than the one ethnicity within it. Was this racism on its own not a crippling indictment of the Establishment? He repeatedly rejects the idea that the Establishment, at least at the level of the diplomatic and intelligence services that he’s interested in, were defined by class. Instead, he argues that a shared masculinity defined these institutions. That’s credible, but what does that mean? How did these men understand manhood?

That’s examined a little, particularly early in the book as Davenport-Hines analyzes the shared sense of humor of the men in these institutions. But later discussions of homosexuality are weirdly opaque. He establishes (again, through the use of repeated brief biographies) that many men in the intelligence field and in the Diplomatic Service were gay, and that the popular press was very anti-gay. But why were the former institutions so far ahead of the latter? If, as Davenport-Hines depicts them, they were relatively commonsensical about homosexuality—and a Foreign Office memo of the period he quotes extensively does make interesting reading—why were they so advanced compared to other elements of a society that could persecute an Alan Turing to death?

There’s a lack of context in this book that’s frustrating. Was that Foreign Office memo a significant document? Or was it something filed and forgotten? I don’t know; Davenport-Hines doesn’t describe the bureaucratic afterlife of the document once it was written. That absence of context, the situating of fascinating information and lives within an overall view, is a recurrent problem with this book. Enemies Within is asking some smart questions about trust (always a crucial theme in a spy story, fictional or not) and about the composition of British society in a particular historical moment—a moment not so far away from the present. But I don’t think the way it goes about answering them is sufficient. There remains then only individual passages, incisively written, evoking individual lives; and that is, at least, nothing contemptible.