Before the United Nations, slaughterhouses lined the waterfront on 1st Ave. 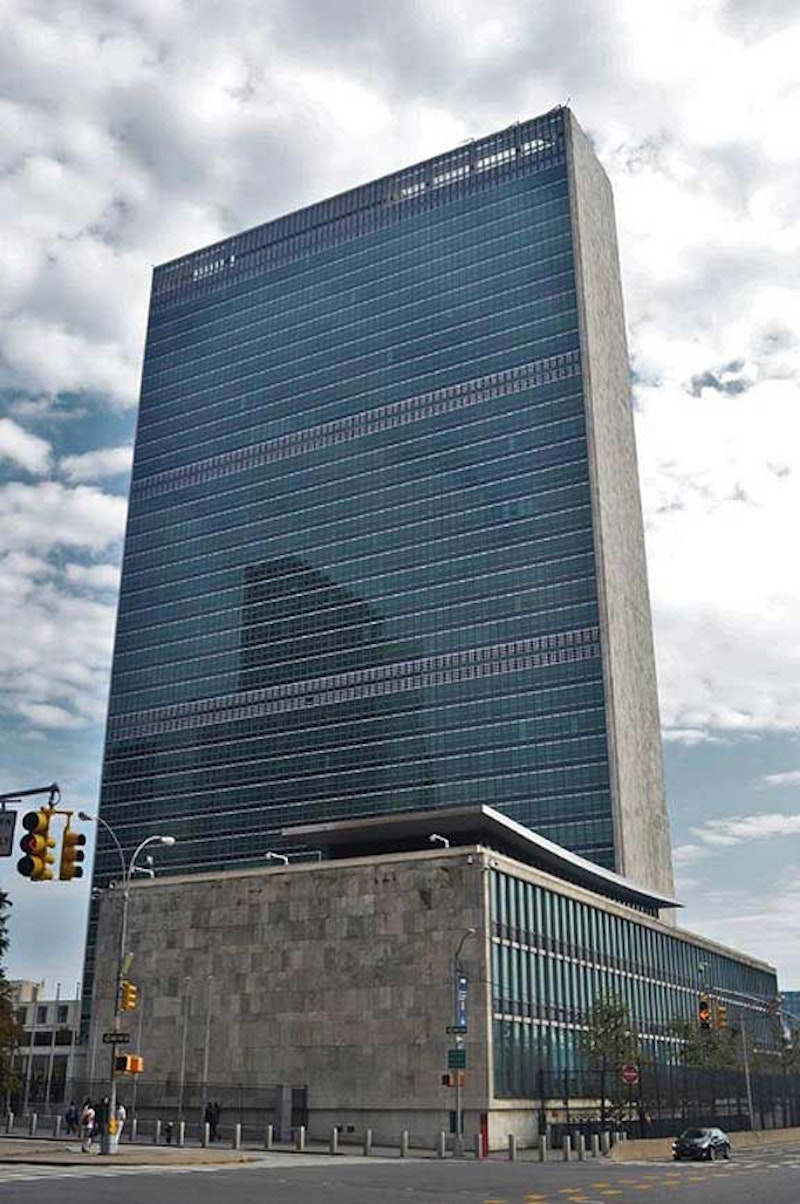 Turtle Bay, in the E. 40s and 50s from Park Ave. east to the East River, likely takes its name from a Dutch term meaning “bent blade,” probably referencing the shape of the shoreline. It’s hard to believe it now, but along the waterfront slaughterhouses were razed in the 1940s to make way for the United Nations complex on 1st Ave. These days it’s a residential neighborhood prized for its peace and quiet—longstanding residents have included Katharine Hepburn and Irving Berlin.

After several years in temporary headquarters in Long Island that included stints in the New York Pavilion Building in Flushing Meadows-Corona Park and in Lake Success, the UN moved into permanent HQ on this site in 1952. The Secretariat Building, one of NYC’s first glass-walled towers, appeared in 1950, followed by the General Assembly Building (1952) and Dag Hammarskjold Library (1963, seen here in the foreground).

This site on 1st Ave. was formerly home to a collection of slums, coal docks, factories and slaughterhouses. Originally the UN was going to be built in Westchester County, but an $8.5 million grant from John D. Rockefeller to purchase a parcel of land from William Zeckendorf changed that. The developer was planning to raze everything east of 3rd Ave. between 46th and 49th Sts., but the UN plan also was able to save some marvelous NYC architecture from the wreckers’ ball.

Tudor City, the residential development set on a hill above 1st Ave., was developed in the 1930s when the messy industries along 1st Ave. were still in place. As a result, most of the windows in the complex face away from the current UN site. 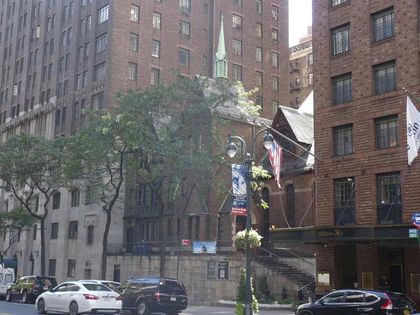 The Presbyterian Church of the Covenant was founded in 1860 and its original building was constructed on Park (then 4th) Ave. and E. 35th St. in 1865, a Romanesque design by the architect of St. Patrick’s Cathedral, James Renwick Jr. Soon after, Covenant hired J. Cleveland Cady, architect of the old Metropolitan Opera House formerly at Broadway and E. 39th, to design a country chapel in the wilds of E. 42nd St. between 1st and 2nd Aves. in 1871. Over time attendance at the chapel outstripped that of the Park Ave. church, and it was decided to consolidate the congregation at this building in 1891.

A Fellowship Hall was added in 1927, and in 1950, E. 42nd was lowered several feet to allow truck traffic under Tudor City Place that bridged over it, necessitating a new granite and limestone base and staircase. It’s been said that Tudor City, constructed surrounding Covenant in the 1920s, was built in a complimentary style to what was originally a country chapel. 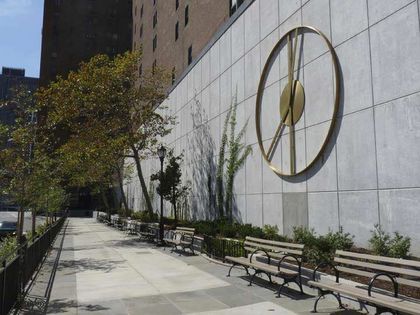 Trygve Lie (1896-1968), pronounced “trig-vee lee,” was the first Secretary-General of the United Nations. A Norwegian, he headed his country’s delegation to the UN’s founding in San Francisco in 1945 and was on the commission that wrote the UN’s charter. He was elected to Secretary-General in 1950, despite a “no” vote from the Soviet Union. He was succeeded by fellow Scandinavian, Dag Hammarskjöld of Sweden, when persistent Soviet lobbying forced his resignation. He’s remembered by this small plaza at the SW corner of 1st Ave. and E. 42nd St. The “Peace Clock” on the wall of the Tudor Tower, by sculptor Lina Viste Grønli, was installed in 2015 and designed so the international peace symbol design would appear on it twice daily. 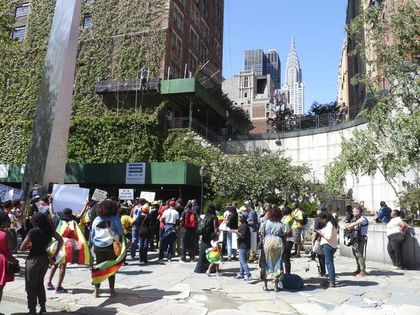 The Sharansky Steps, E. 43rd and 1st, were occupied by a demonstration against Zimbabwean dictator Robert Mugabe the day I passed by. Mayor Ed Koch named these steps leading from 1st Ave. to Tudor City in 1981 for Nathan Sharansky, a native Ukrainian who worked tirelessly to allow Jews living in the Soviet Union to emigrate elsewhere. Sharansky served as Minister and Deputy Prime Minister in four successive Israeli governments between 1996 and 2005. He was awarded the Congressional Gold Medal in 1986 and the Presidential Medal of Freedom in 2006.

The adjoining Isaiah Wall was built and dedicated in 1948 during construction of the U.N. headquarters and has a quotation from Isaiah 2:4: They will beat their swords into plowshares and their spears into pruning hooks. Nation will not take up sword against nation, nor will they learn war anymore. The rededication in 1975 added the name Isaiah to the quotation. 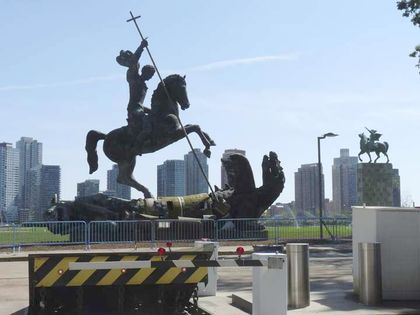 There’re a number of public art installations in the United Nations campus. There are a pair of equestrian statues; a life-size bronze statue of an African elephant by Bulgarian artist Mihail Simeonov; Arnoldo Pomodoro’s reflective sculpture Sphere Within a Sphere; sculptor Karl Fredrik Reutersward’s 1988 Non-Violence, showing a gun tied in a knot; and in recent years, a slice of the Berlin Wall has appeared on the campus.

Above is a depiction of St. George, the patron saint of England, and the dragon he defeated in the fables (the George Cross has been awarded in England for bravery since 1940). Sculptor Zurab Tsereteli incorporated fragments of US and Soviet Russian ballistic missiles; the Soviets donated the work in 1990, just before the fall of their empire. 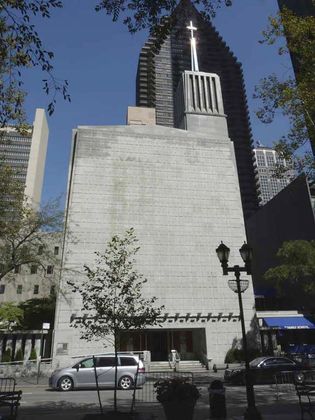 The 1964 Holy Family Church (315 E. 47th facing Dag Hammarskjold Plaza) with its white marble exterior, reminds me of Edward Durell Stone’s 2 Columbus Circle, remodeled in a controversial re-boot in 2007. (The spoon-shaped decorations that gave it the nickname “Lollipop Building” were removed during the remake.)

The church was new when it was visited by Pope Paul VI during his NYC tour in the fall of 1965. The pontiff visited the UN, the 1964-5 World’s Fair, and the ex-Cardinal said Mass before thousands at Yankee Stadium. It was the first time a sitting Pope had ever visited the USA.

The church is backdropped by the 72-story 2001 Trump World Tower (Costas Kondylis, architect). Has Trump ever built an esthetically pleasing building? For about one year, 2001-2002, it was the world’s tallest residential building until surpassed by Tower Palace Three Building G in Seoul, South Korea. 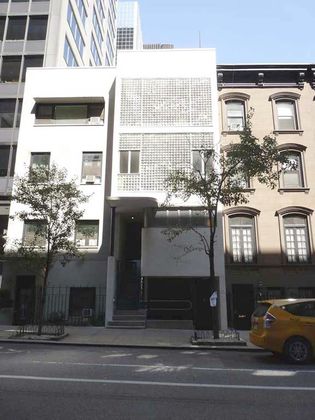 Turtle Bay Gardens has seen its share of revolutionary architectural design. Swiss-born industrial architect William Lescaze redesigned a 1850s brownstone into something entirely new in the 1930s. It was the first concrete and glass Modernist residential building when it was finished in 1934.

Lescaze designed the 38-story black masonry and glass tower a couple of doors away on 3rd Ave. and E. 48th, the US Plywood Building. It’s the longtime home of Grey Advertising founded in 1917 and now called Grey Global Group. When I worked at Photo-Lettering in the 1980s on E. 45th, not far away, we got plenty of ad typography work from Grey. 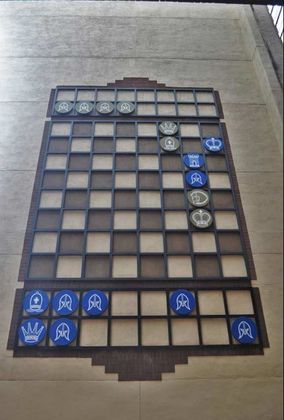 Facing the courtyard at the back of 767 3rd Ave. at E. 48th is the world’s largest chess board. It’s the idea of Melvyn and Robert Kaufman of the William Kaufman Organization, which has offices in 767. If you’d like to play you notify the building concierge, who moves the pieces with a cherry picker. Pieces are moved once a week on Wednesday mornings, or were before the Covid crisis.

The chessboard isn’t the only quirk at 767 3rd—inside the lobby you’ll find a stagecoach and a 1929 Ford truck. The Kaufmans also put a WWI fighter plane on the roof of a lower Manhattan highrise. 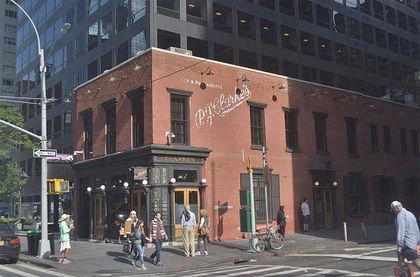 Finishing with a pint and a burger at P.J. Clarke’s at 3rd and E. 55th, established by Ehret’s Brewery in 1890, with Patrick Joseph Clarke taking over in 1904, continuing until his death after World War II. The place still holds on to old-time trappings such as vintage porcelain urinals, mahogany woodwork, tin ceiling, and portraits of FDR, JFK and Abraham Lincoln. Customers jot down their orders on notepads provided by staff—a Clarke’s tradition. Frank Sinatra, Jackie Onassis, and Nat King Cole were all regular patrons, and Buddy Holly proposed to his wife, Maria Elena, at Clarke’s on their first date in 1958. Dick Clark made his way here after finishing his New Year’s Rockin’ Eve ABC broadcasts. And Ray Milland staggered up 3rd Ave. in an alcoholic daze after cadging drinks at Clarke’s, which was called Nat’s Bar in The Lost Weekend.