Too Much to Think About 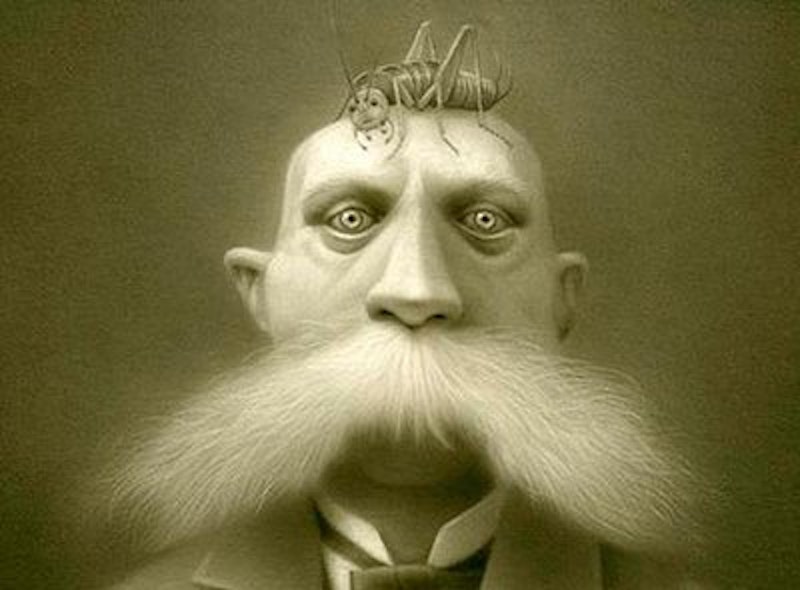 Marvin hasn't had a decent night's sleep followed by a decent day since Obama was running for reelection. He says habits can catch up with you like that. He's stayed up so many times and slept in so many times, just to suit himself, that his day dividers have turned to mud. His afternoons are like mornings, the start of the day, except when they feel like it's three a.m. because he had to stay up all night for a dentist appointment scheduled at crack of noon.

You should see his eyes: the bags have double chins, so puffed up and solid that they bear creases, and those creases stay put. They don't budge from one time that I see Marvin to the next. The eye-bags they're printed on are molded in place, with contours. I suppose that happens when you're watching Joe Franklin clips on YouTube and don't know what's up beyond your window, whether the sky is blue or black.

The bags and creases are there for good, I guess, the complete set. This means that Marvin, like most men I know, is an idiot. Of course, there are many non-idiots in the world of men, but I don't spend time with those, just the gutterballs who wreck themselves by living for their little whims. Given that they're my bunch, I'm an idiot too. Marvin tells me that my eyes are just as bad as his, maybe worse, and I can't say he's wrong. I actually have bags above my eyes as well as below, he points out.

He does this shortly after he's been complaining about his muddy, bleared-over night-day-nights. It's always the second act of our little go-arounds. I suppose he doesn't like the look on my face as I listen to him complain, and this triggers the “You're another” phase. None of this is my doing, not the first phase or the second. I swear. I mean, beyond the fact that I sit around in cafes with people who have time on their hands. Beyond that basic stipulation, I'm blameless.

Such a common thing, a touchstone: when your face scorches at the memory of something dumb and awful that you said while young, something that seemed to promise that the great moment had finally arrived and now people would see how bright you burned. Just a few seconds, but they hurt worse than any other few seconds, even the ones tied into longer-running, continuing disasters like breakups or bad jobs. It's because these seconds teach you about yourself. Nobody put those words in your mouth. They were there because you lived your life in the right way for them to appear. Circumstances had to line up just so to give them the opportunity, but all the while you'd been doing your part. Gave them an opening.

Pomposity by age group. Among teenagers and college students, a disfiguring plague: insufferable kids can be so affected and tic-ridden that to experience them is to witness social freakishness. Kids, the grown-ups say, twisting their mouths and lifting eyebrows. With people in their 20s/30s, pomposity is widespread but transient, an eruption. The rash breaks out and an acquaintance's behavior is disfigured; then the subject changes and you resolve not to look at that canker nesting under the poor bastard's chin. Among the middle-aged, pomposity can proliferate to teenage levels and then settle in, get crusted. Those that have it make it a support of their psychic existence. They can't get by unless they're grubbing moments when they feel more important than somebody else.

Peggy Noonan and Paul Krugman had a disagreement one time on TV. This was about the debt ceiling, that big showdown. Noonan took the line that it's normal for presidents to negotiate over the debt limit. Krugman replied that it was something new for a party to take the country to the edge of default just to get the other party to give it concessions. Noonan's reply, if I may be poetic, was like a balloon of woozy, milky-white, lopsided glass wobbling from the craftsman's blowpipe. “Paul,” she said, “it is more heightened but it is still part of business as usual, because it takes place within the context of an American president having to deal with the reality around him. And the opposite party, having to deal with the fact that he has the presidency, he has the executive, make a deal.”

If somebody drove a car off of a cliff, Peggy Noonan would say that this was driving as usual because the driver used a steering wheel and drove forward instead of back. President coping with outside forces, the opposition contending with his power, the two of them talking out some hard terms—yes, all are recognized elements of Washington power struggles. But nobody doubted that. What she ignored was this tactic of jacking the other guy by shutting off the government's funds and threatening to make the country default.

To find a context in which Noonan's remark could stop being pointless, you'd have to imagine her as a staff writer on a TV drama. Paul Krugman is someone who cast doubt on her new story idea's viability for the show, and she's spelling out how he's wrong, how her idea fits the rules of the Capital Clash universe.