This World Is Not My Home

We dwell in worlds without end spinning like tops in corkscrew space. 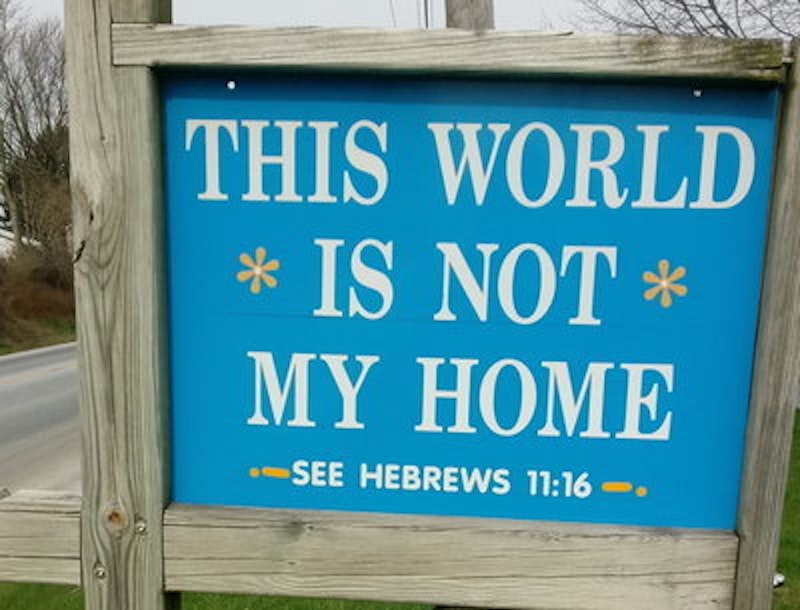 There are too many songs about the earth and different takes on what it’s all about. Stop the... I want to get off. Make the... go away. Oh baby, baby it's a wild, mad, welcome to my, we are the, brave new, I'd love to change the, as the... turns, another, without end, waiting for the end of the, what a wonderful…

Our world realm is right at home and we can never go again, bringing it all back, but there's no place like, is where the heart is. I’m getting closer to my, and I can’t find my way around to where this all begins. Songs and sayings about home on earth. We have a special day to celebrate earth one-liners. Where we belong and try to fit in with the rest of us around the globe. In ways that are as complex as coded numbers and symbols to convey a position on some stellar map. A place in the world. The individual celestial guide around town or the universe at large. Just a cheesy overpriced outdated map of the stars homes around Hollywood.

A whole other galaxy away. Strangers in a home away from home. We dwell in worlds without end spinning like tops in corkscrew space with the heaviest friend we know, gravity, that weight pulling down the feathery essence of lonely souls. A blazing ball of basic elements that somehow supports life as we believe it. Not too this or that, but just right like bland porridge made by a family of bears and an unwelcome little girl named Goldilocks. Some stories are better left untold. Maybe even this one. But that’s a different story. Worlds apart from each other.

The imprecise science of speculating on worlds and our part in them. Conspirators based on half-truths, flawed facts and hearsay. Ions of worldly evidence backed up by failed research and attempts to define the unexplainable proof of planetary existence. Like a children's encyclopedia filled with facts about science and experiments that show off the nature of life on this crazy rock covered with water. Flat, round, square, or invisible, a house is not a home without love, a dizzy world void of giddy life. Laugh and the world laughs too. When you’re smiling it looks easy understanding the ways of the world.

It’s National Poetry Month. The deadline for income taxes just passed. The official party line for Fox News told by a CBS fool to an NBC idiot on an ABC affiliate. Worlds spiral out of control within and without any idea of us or the DNA in our spit. A confounded species of primates with reptilian brains and golden hearts.

A beautiful cosmetic time/space brightness reflected off tin foil hats, the Hubble telescope and random mirrors on abandon walls nobody sees. The gleam in your eye. Pictures of you in and around the world. Looking into infinite darkness and the sparkle of cheap molecular cell worlds resembling entire galaxies in a speck of atomic space dust make-up. All dolled up for a cosmic dressing down. Fake strands of costume paste baubles. Beauties byproduct, an imperfect world or a blind vision of earth. We watch in real time harmony in tune with some uninhabitable planet news. World news of the day. Up to the minute forecasts. A world apart.

A whole catalogue of stuff to make life sustainable for living. May as well make the best of both worlds. The trinkets of archeological confusion, dug up out of the earth. Familiar landscapes permanently etched inside the eye sockets of any old world. Paintings of photographs and photos of paintings dance on airwaves of sound. Dinosaur fossils jigsaw a puzzle of distinct skeletal contradictions. Early humans too late to the party. Maybe we came from another world or crawled out of some primordial ocean. Lungfish sprouting legs stomping in the mud of our shared fiction. Born into a mess of emotionally starved bipeds on parade looking for a millennium party at the edge of the world. On your cellphone or in your own backyard. Where extraterrestrial fish dance in a barrel.

The cartoonist Robert Crumb created a 1960s counter-culture character resembling the idea of what god might look like in an underground comic book world. Big clown boots under a plain nondescript ankle length gown and a long white beard. His name was Mr. Natural and he said semi-profound stuff like "Keep on Truckin'” and “Just Passin' Thru." He was somewhere between a guru and a crackpot deity. A cult leader for pothead freaks and social outcasts. Never quite at home in his two dimensional world. One of his more obscure lines is “The whole universe is completely insane… yep.”

Quick with the non-sequiturs, mottos and slogans of modern world angst. Mr. Natural could be a logical successor to our fearless leaders. Right up there with presidential hopefuls like Vermin Supreme or Lucifer. In the ever-changing world we dwell in, we’re just passing through. Without all the hubbub about the meaning of all or nothing. It comes crashing down the cosmic stairway from unlikely heavens.  Tumbling and stumbling like drunks running out of a burning bar.

Reality has never had it so easy with all the scripted set-ups and pre-planned rehearsed series of demented housewives and pseudo families. Who’s the best chef, singer, icon, or idol? DIY shows about how to live in eternity as an immortal survivor on a shoestring budget and build a birdhouse from recycled dreams. To gain the whole world. It’s all up for grabs. The world is yours. Spring is finally here. Really? Not quite. You have no rights. Shut the fuck up! Maybe in your little world. Lighten up fuckers.