The Only Party I Ever Crashed

That era is a blur of aimless drives and parties. 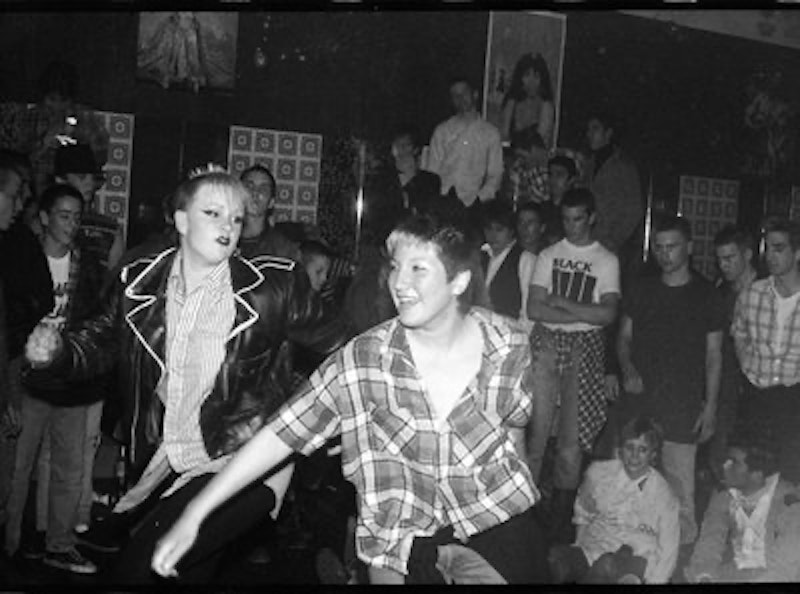 Why was I friends with the goof? Because I was a loner who didn’t have a driver’s license or anything better to do, really. We’d gotten along well as kids in summer camp, and then ran into one another at a party sophomore year. It was us hanging out, or me spending Fridays bored alone and bored.

How did we meet the punk girls? Well, the goof—confident beyond reasonable measure—met them at the mall, somehow charmed them, and invited them to someone’s birthday party. One was tall, scary, strident. Another was short, cute, into bad boys. The other was blond and normal, which was freakish.

That era is a blur of aimless drives and parties without drinking, bad jokes, riding the Light Rail to Fells Point or the Maryland State Fair, beeper envy, the goof’s motley crew of pals. The short cute punk girl and I shared a birthday; she was supposed to be my date to junior prom. The scary punk girl flipped out on her mom in front of my dad. There were a lot of telephone calls, so everyone seemed to know everything immediately even pre-Internet. Somewhere deep in these memories: zine culture, a bonfire, Last Splash, the goof dating an Iranian, a New Years’ Eve gathering where I heard P.J. Harvey for the first time. A climax: that time we crashed the scary girl’s birthday party.

The punk girl’s crowd were wastoids, weirdos, out on the fringes in ways I couldn’t even begin to aspire to. The goof and I were girl crazy, which didn’t go down well with that crowd. Everyone was invited over to see the scary punk girl turn 16, or 17, or whatever. Until the goof told me that the party was cancelled.

“Hey don’t get mad at me, that’s what [name of girl he liked] told me,” equivocated the goof.

Eventually, of course, we found out I was right. We’d been fed a lie, because that crowd was sick and tired of us hitting on all the girls.

The goof was sad, because he tended to be sad. I was mad, because as a young man I was irrational and wasn’t yet cognizant of the reality of how some people saw me, that usually I was a narcissistic jerk.

“We should crash that party, man,” I argued. So we decided to crash the party.

What did we expect to happen? How did we expect that to go? We certainly hadn’t thought anything through. The point was to show up. We conned two of the goof’s friends—twin brothers—into driving us to the scary punk girl’s house. We went up to the front door. We rang the doorbell. The door opened.

Inevitably, the scary punk girl chewed us out, loudly and histrionically, in front of the 20-30 people attending the party. Inevitably, we had no counter-arguments. Inevitably, we slunk back to the car in the driveway and sat there trying to process what happened, when some dude we didn’t know wandered over and said “Hey, I’m sorry, but you guys have to leave, or we’re gonna have to call the police.”

That was the end, of course; we never hung out with the punk girls again. I didn’t go to Junior Prom at all. The goof and I wound up enrolling at the same college, where the normal blonde girl was also supposed to go but didn’t. I ran into the scary punk girl at Lollapalooza 1995 and we talked and it was clear that we had nothing to talk about. There was a rumor, from a reliable source, that the cute punk girl might have contracted a feared social disease.

None of it matters much now. The past is dead. At some point I realized that I can’t listen to The Queers’ “Punk Rock Girls” without experiencing a full body cringe.