"They too want to talk." 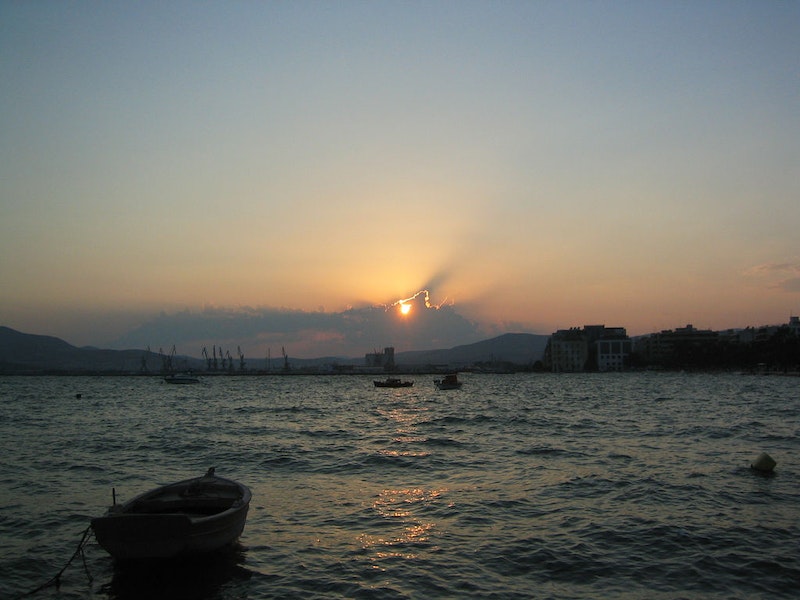 On the airplane I sat next to a 62-year-old Greek-American woman named Kiki who got married at 37. She told me so within the first five minutes of sitting down, and added that it’s not too late for me either. By the time I got up 10 hours later, I knew all about Kiki’s son’s struggles in AP psychology, his engineering degree from Cooper Union, the car accident four years ago that rendered Kiki unable to wear stilettos, how she met her husband at church, how he scuba dives like her, about her father’s shipping company where she worked before marrying, and recent renovations Kiki oversaw to her house in Astoria. I told her my name when she asked upon landing. I said, “It was nice talking to you, too.”

The drive from the Athens airport to the bus station took an hour. I took a taxi and the young driver helped me with my bags. I was tired from the last 10 hours of “talking”  and pretended I could not speak Greek in hopes this might exempt me from polite conversation. “Is okay. I speak English very good.”  He told me the islands were very nice; have I been? That if I wasn’t married I shouldn’t worry; this summer, here in Greece, I might meet my the love of my life. “You are a kind girl, I can tell,”  he said. “My business is peoples; I know.” After being riddled as to why Greece is better than America—“I love the quiet,”  I answered—we arrived at the station where he proceeded to overcharge me 10 euros. And because I didn’t want to talk anymore, I gave it to him.

My parents picked me up five hours later from the connecting bus station in Volos. Eager to make conversation, they asked about the trip. I told them about the bathroom attendant at the bus stop, the little old lady who sat with a tip jar outside the door on a folding chair, dispensing wads of single ply toilet paper from a single roll. “No cologne, though.” I told them about the porcelain footprints inside the stall, the elegant hole in the ground over which I squatted. “It got me thinking; I should have my toilet back home removed. Go modern, minimal; make a statement. Throw out my scented candles.”

“How long will you stay?” some friends of my parents asked me over the roar of the boat’s engine the next day as we were motoring to the island of Skopelos. “I’m here for the month of August,” I yelled back. Tired from the trip, I was at first excited by the roar of the engine, anticipating a few hours lull in conversation. “She doesn’t talk much, your daughter!” our host yelled to my father. “What?” “She doesn’t talk much, your daughter?” “What?” my dad yelled back. Then they put the radio on, turning the volume up enough for it to be heard over the engine. Then they raised their voices so they could be heard over the music. They talked about the view, about the sea. “It’s so relaxing,” they yelled in agreement.

Back at the house, every room is filled with guests, aunts and uncles and cousins and friends. In the afternoon, after lunch, I go up to my room for a nap. Drowsy from the midday heat I shut my eyes and listen to the medley of voices drift away. I dream of a long conversation, but when I wake I remember nothing of what was said.

In the early evening, I step out onto the front patio and find my cousin’s four-year-old daughter Dimitra dancing before an audience of our family. They clap and laugh as she wiggles from side to side. They call her “i micrí,” which means, the little one. It’s what they used to call me. My mother stops clapping and says she doesn’t like my dress. “What’s wrong with it?” I ask, looking down. “It looks old.”

Conversation with Dimitra is easy. When she stops dancing she sits next to me and I ask, "What color is the sky?" She says, “Blue.” I ask, "What does the rooster do?" "KooKoorikoo," she sings. "And the dog?" "Ghav, Ghav,” she explains. (Greek dogs bark in Greek, don’t you know?) Then she, Mamoù (her stuffed monkey) and I sit for coffee. Mamoù drinks too much too quickly and becomes sick. I tell him I understand. The micrí reprimands him and I jump to his defense. I say, “Give the monkey a break, i micrí! He’s had a long day.”

In the kitchen my aunt flips on the radio and the voices of a Greek talk show waft out. Dimitra gets up and starts to dance to an argument about the Greek economy. Dimitra can dance to anything. Eager for some silence, I go down to the beach to stare out at the sea. The wind and trees are loud. The leaves rustle furiously as if urgently relating an opinion; everyone's got something to say.

I take my bike into town after that and am stopped by a flock of sheep blocking the narrow strip of pavement that leads to the village. I stand and wait for them to pass. When they see me, all the sheep behh; they disapprove of my outfit—I should have worn the green dress. “Sometimes, Iris, it’s like you don’t even want to get married,” the sheep say. Then the sheep dog emerges from the crowd, a big shot barking orders. I spot an old mustachioed shepherd watching silently in the distance. Single? Eventually they all pass and the road is clear again. The sheep clink off with their bells and ears marked for slaughter. “You don’t have forever,”  the last sheep tells me before he turns away. I shrug. “Neither do you. You’re gonna die, you know” I say. “And your jacket’s old fashioned.”

I spin through the olive groves and the wind fills my hair. How old am I?

I pull my bike across the gravel path an hour later, and find my parents on the porch with their feet up. I join them. Dimitra joins me and asks why my feet are so large. “To match my nose,” I tell her. My mother complains that I'm anti-social, that I should make more of an effort to see my friends here in town, to talk with them, or else “they might stop talking to you. You don’t want to become a hermit,” she warns. She tells me, “Why don’t you go out tonight?” the same way she used to say, “Must you go out every night?”

The road to and from our house is less a road than a narrow dirt trail cut out from some trees leading to a clearing by the beach where our house rests. The “road” passes olive groves, orchards of plum and pear and quince, and farms with chickens and roosters and their guards—more asshole dogs. After an evening at a café in town talking with friends, the sky is black and littered with stars like empty soda cans and the embers of discarded cigarettes. I drive back in a 1982 diesel gold Mercedes we call "The Tank" which my parents shipped here 10 years ago. It is the car with which I learned to drive, the car I took to and from high school, and the car in which I used to have sex with my first serious boyfriend. The Tank rolls slowly through the trees pushing rogue branches out of the way with its nose. A few horses grazing near the “road” see headlights and approach. They too want to talk.

I roll down the window. The one that looks like Julia Roberts in Pretty Woman sticks her head in. She thinks I'm lonely. She asks, “You lookin’ for a good time?" She wants to be taken up to my penthouse. “I don’t have a penthouse,” I tell her. She wants to be saved. “I don’t have a penthouse, and even if I did, what do I want with some hooker horse?” I honk a few times to usher her out of the way but she’s stubborn and thinks I’m honking compliments. I nudge my way past finally and see her in the rearview mirror watching me leave. She’d look better with less makeup. Someone should tell her.

My dad likes to listen to opera in the morning, but my mom never lets him because she thinks Turandot sounds like yelling which makes her jealous; she prefers to be the one doing the yelling. It’s not that she’s angry about anything in particular, just that everyone in my family alternates between two volumes—yell and scream. I'm the black sheep because I alternate between wail and cry. As a result no one ever understands what I’m trying to tell them. They yell, “What?” I whimper, “I didn’t say anything.” They scream, “What?” I sniffle, “May I have an aspirin?” “Turn down that racket now!” my mom yells at my dad, losing her patience with “Nessun Dorma.”

Yesterday, though, my dad insisted on hearing his songs, and so together we mischievously barred the door to the front terrace where normally my mother sits with her twin sister to peel vegetables for lunch and gossip about the people they both know—those who are not married and not getting any younger, those who are getting fat, unable to pass their exams, earn their college degrees, and those whom they suspect might be gossiping about them, too.

My dad’s not “anti-social”  like I am, but he likes, every now and then, a little peace and quiet, too. He achieves this by turning the volume up so high that the sound of his stereo drowns out all other sounds. Like that, all competing talk is swallowed by the melody. All dogs, insects, birds, sea, wind, and any and all conversations are overwhelmed in a rush of glorious music.

Yesterday, he turned the volume all the way up on Tosca. And we sat by ourselves with our feet up on the empty chairs, looking out to sea, and for a few minutes, said nothing. The profoundly lonely voice of the jilted Maria Callas (divorced and then ditched—“a kind girl, such a shame”) swirled around us and soon drowned out the voices of the rest of my family who, relegated to the back terrace, went on broadcasting their own harmony of convivial screams. Yelling at each other in their Greek staccato punctuated occasionally by sotto voce sighs—I could almost still make out their measure, their firm agreement this time about me: Now that I’ve completed my second master’s degree, what I really ought to do is find a man and get married. And quickly, too, before I gain any more weight, before I get too old, before people start to talk.