The Wise Judge Explains Men to His Daughter

Fiction: A philosophy of sex and character from 80 years ago. 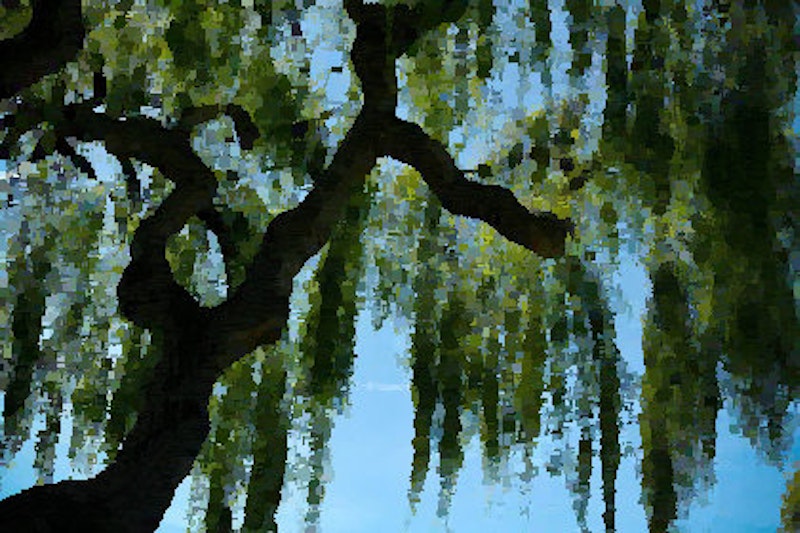 Antonia and her father sat on the rear porch. The weeping willow hung its branches down to the ground. Light filtered through; it was a blazing afternoon, and the air sealed clothing against flesh. A pitcher of water, recently ice water, sat on a table. Insects buzzed in the screen of branches, trapped.

Antonia wore her white blouse and the knee-length skirt of linen that she'd had since her second growth spurt, three years ago. Her father wore his old seersucker jacket, his flannel trousers and his moccasins. All had been worn for many summers; his left moccasin was blackened along the left edge, the right had a gap in its stitching.

It was Sunday and in a week the girl would be leaving her father for college in Madison. She had long legs, a long torso, a swan neck, an elegant profile; her chestnut hair fell to her shoulders. She looked like a magazine illustration from the teens of the century, an illustration of a young woman taken by patriotism. She was shy and preferred riding and her friends to meeting boys.

Her father had raised her without a mother. He was also shy, but as judge for the county he had seen a great deal. From behind his iron-gray mustache, he prepared to tell her what she thought she needed to know.

“Tony,” her father said, because he always called her that. “In the future there will be many, many men who will pay you attention. Perhaps you have met a few. Remember that a man in the presence of a treasure does not care about you. You are what suffers the assault as he brings himself and the treasure in contact. And you possess a treasure. Do you understand me? I think so. You have friends, and I know that children think together and trade information about their futures.

“One who possesses a treasure does not encounter the best in human nature. Remember that there are men who bend, men who break, and men who hold firm. Reasoning and bouts of philosophy do little to gird the spine. Some beings live up to what is required of a man and some do not. One finds which he is when the moment arrives. You will be witness to many men discovering as much about themselves.

“You possess not only the treasure that belongs to a young woman but your particular grace. I've seen your friends from school fuss over you. A swan is recognized; she must stand out. You will be buffeted by the desires of men. Be sure you are in no physical situation where those desires may carry the men after them. For if your setting does not prevent them, nothing else is sure to do so. Do not meet with any of them in any situation where no one may hear a cry of distress. Men will be upon you. In close quarters they will press their advantage. If you stray to removed spots, some few of those men will take what they want.

“You know the wires of our telephones, our lights. The casing of those wires can be scraped away and the filaments laid bare. These can burn you and shock you. Men's character, scraped bare, can scorch and kill. It is a man's duty to never be scraped so firmly that the blade detaches his self-respect from his nature. If a man's substance peels before circumstance and desire, he is a man to be avoided in all situations and pursuits. You will learn to recognize such men, and even more those whose weakness permits the trivial local disorder in which they smirk and make fools of themselves."

Antonia thanked her father and never forgot his words.

Six days later Antonia's father drove with her to the train station in Appleton. She got on the train and began a new stage in her life. Her father, as he so often did when she was in his thoughts, drove by himself to a house in Green Bay where for years he had been a faithful client of a fluctuating number of girls. He was always respectful and kind to them, and the ones he preferred were always built low and wide and generous of bosom.