The Two Sides of Working Poolside

Lifeguarding can be the most blissful of summer jobs until you actually become necessary. 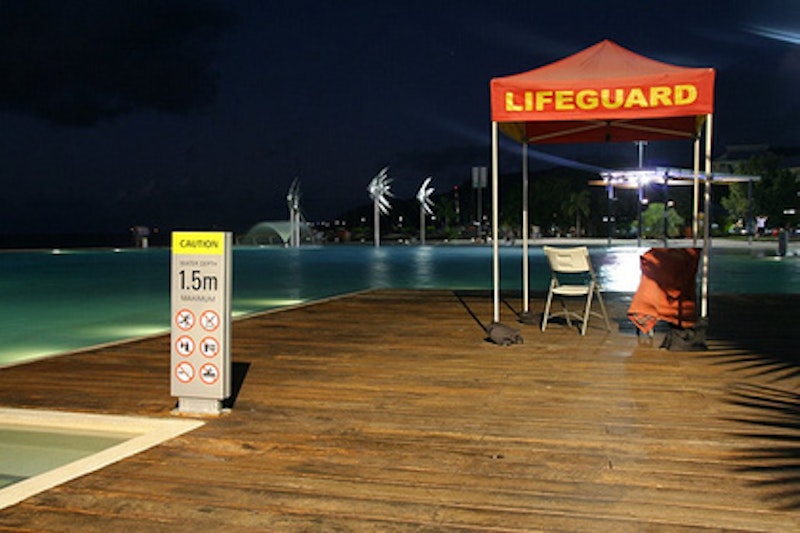 I spent the summers between my junior year of high school and freshman year of college on the poolside. I laid out in the sun, read a few books, and listened to Doors and Rolling Stones albums all day long. Sound like a good vacation? Well, that was my job.

I worked as a lifeguard at a rarely visited golf course community pool for $10/hr., opening the gates at nine o’ clock. On a cloudy day, I could be by myself until the shift ended at two-thirty. It was peaceful. It was quiet. It was a do-nothing job with a big paycheck. It was everything I was looking for.

It took me five years to find a job that paid well and was also enjoyable. In between the time when I first started working at 14 years old and the summer of my senior year, I had worked odds and ends around town at a different job each summer. I had bussed tables at a ritzy restaurant in my neighboring town, flipped burgers at a dockside bar and grill, and hosed down golf carts before I discovered my vocational oasis.

While lounging around and essentially getting paid for what most people consider recreation was great, the best part of that experience at the pool came from interacting with a variety of patrons. The pool was located in a Stepford-esque community that ran like clockwork. The regulars showed up at their specific times just about every day.

Nine-thirty was the Pryors’ time, and they’re two of the friendliest people I’ve ever met. We often found ourselves talking for hours about school, books, movies, big-time events in our small town. Every Fourth of July, Mrs. Pryor would leave her barbecue at her home just to bring me a bowl of her homemade ice cream. I still keep in touch with them regularly.

Mrs. Browne came at about one o’ clock each day on her lunch break. I’d sit on the edge of the pool with my legs in the water and we’d talk about the era of music we both loved. She told me stories of Woodstock, Dylan concerts, all the relics of that time that I’d never been able to experience myself. She even brought me the DVD set of the Monterey Pop Festival and a few Janis Joplin albums I hadn’t yet discovered.

Then there were the kids. Of course, there were the regular brats who didn’t listen to a word I said and trashed the bathroom on a fairly regular basis, but those hellions aside, the kids were what made the job truly fun.

I let them test the chemicals in the pool (despite the disapproval of my boss) and tossed beach balls around with them. I even spent an entire hour throwing a four-year-old in the air off my shoulders until I could barely lift my arms. It was worth it. They made the job exciting and watching them play for hours on end reminded me of that time in my life when nothing mattered but a day at the pool.

I went three years without ever having to do my real job, what the employers actually paid me for. Yes, I swept the deck, messed around with the chlorinator, and vacuumed the pool floor, all of which could be done by a janitor. They paid me to be a lifeguard, and it wasn’t until last August that I was put to the test. The babysitter was off in the corner, yapping away on her cell phone like so many inattentive mothers do, and I was watching. The girl was about three years old and hadn’t yet learned to swim. I watched her sprint along the side of the pool. I shouted the reflexive “Walk please!” that almost every young child ignores. She made her way toward the deep end and I got out of my chair. I watched her take one fateful step on the edge, her feet slipping as she landed on the concrete and fell face first into the water with a tiny splash.

By that moment I was already running toward the deep end. What I saw was an image that still hasn’t left my mind: the little girl was face down, her arms and legs spread in the shape of a star, and she was slowly sinking. She was close enough so that I only had to dip my arm to the shoulder to scoop her out. The babysitter had clicked her phone shut and was running toward me, screaming at the top of her lungs. The girl was coughing, and her eyes were wide with shock, but she was fine.

Despite all the fun in the sun that came with the job description, there was always a distinct feeling of paranoia. Kids will always be kids. They don’t care. They jump too close to the edge, they dunk each other underwater, and they have a rooted fascination with deeper waters. It was my job to keep them safe.

I have a lot of great memories at the community pool. I met some wonderful people, got a tan, and made enough money to get by in the following school years. But the one moment that will always stick with me is that particular August afternoon