A trip through Europe keeps rolling, with an emphasis on good times rather than mind-blowing personal connections. 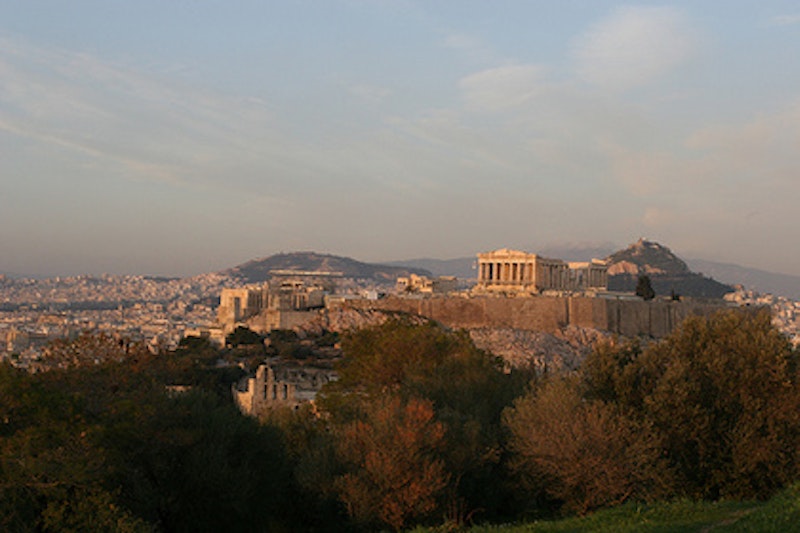 MYKONOS, Greece - Traveling is overrated. Contrary to popular belief, traveling doesn't really change you all that much. Yes, you may start wearing a lot more scarves after your semester abroad in Europe, but in the long run, you're probably the same person you always were.

I remember the first time I left the country to go somewhere other than Canada or a resort in the Caribbean. It was a weeklong family vacation trip to London, and I prepared myself for a life-changing event. London was and still is my favorite foreign city, mainly because of the great couple of days I spent there on that first trip. I spent a day alone, wandering around the Tate Modern museum and navigating the bustling sketchy markets and canals of Camden Town. I watched an England-Sweden World Cup match in a pub so packed we had to sit on the sticky floor. It was one of the best vacations ever, and yet I was the exact same person when I came back, with maybe a few extra stories to tell.

There are, however, exceptions. Israel, for instance, made me think. The experience brought up serious questions about my identity as a Jew, as an American, as a citizen of the world. It challenged my political beliefs. Often, traveling makes you examine your American heritage in relation to another nationality. Rarely, though, are you confronted with a nation of people whose roots are so similar to yours. My Jewish great-great grandparents left Europe for America. My new Israeli friends? Their Jewish grandparents left Europe for Israel, choosing it over America. I could be them and they could be me. I am different now. I could write two more columns about my thoughts and experiences in Israel. The two weeks I spent there changed the way I think about myself, even if I'm the same person. That's more than any other trip has ever done.

But that phase of the trip is over. My two weeks of self-discovery have ended. The next three weeks will no longer change my life, other than provide a shared memory that will last forever. This trip is no longer about ME ME ME. Now it's about us—my best friends from college have joined me in Europe. The eight of us have known each other for all four years of school. Six of us lived together all four years, and the other two lived with us for two. This is our last hurrah together before we scatter across the world. To Cairo. To New Orleans. To New York. To My Parents' Basement.

Sometimes, traveling is like seeing a celebrity. When you're in a place like Israel, where you've read about it in the news every day of your life, or looking at something like the Acropolis in Greece, of which you've seen a billion pictures, it's odd to see in person something you think you already know. The feeling is very similar to the time I ran into Alan Tudyk, a.k.a "Steve the Pirate" from the film Dodgeball, outside the Treasure Island Hotel in Las Vegas. It's like, "Whoa, I've seen you before and you look exactly the same as I expected, but at the same time you look a little different, and I can't believe you actually exist." Yesterday, we got off the metro in Athens and tried to locate the Acropolis to get our bearings and find our hostel. It took roughly 30 seconds. We emerged from the exit and BAM!—the Acropolis is right there, sitting atop a tiny mountain. Democracy was invented there. It's one of the holiest secular sites in the world. And we used it to find our hostel.

There are so many expectations for traveling, especially when you're going to Europe, a place that draws a reaction from virtually every American. If they've never been themselves, they know someone who has been to Paris and said the people sucked or been to Italy and said the food was great. Pop culture builds up stereotypes and clichés about European travel. Whether it's Eurotrip or that great travel recap scene in both the film and book versions of Rules of Attraction, everyone has a preconceived notion, even me, and I've been to some of these places. I can't shake that American image of the wild collegiate Euro trip.

So when this cliché becomes a reality, life starts to get a little surreal. Right now, my life has taken on the qualities of a story not unlike those that I've read, watched, and heard since I was a kid. Remember the first time you went to a raging college house party and it was exactly like the party in Old School? You couldn't believe that the movies got it right, that life was like that, and that you got to be a part of it. This is like that feeling except it's constant. While describing to my girlfriend the clay, boxy white houses with blue shutters on Mykonos, she responded, "Oh, you're THERE!" Yes, I'm THERE. Your author is sending this dispatch from a place that is often renowned as the most beautiful place in the world.

We befriended a kid we met from our rival school Michigan State and spent a whole day sightseeing with him.

We drank one Euro beers atop our hostel, with a lit-up Parthenon looming right over us.

We convinced a group of Canadians, some guy from Manchester, and our hostel roommate to go out to dinner with us. We proceeded to get everyone at the table drunk, including ourselves, and now they must think Americans are drunken lunatics because DW and I almost got into a fistfight.

After a night of drinking in Athens, we convinced our hostel roommate, a twentysomething former tax lawyer from the little known English Channel nation of Guernsey who left his high-paying London job to travel the world till his money ran out, to follow us to Mykonos. He came with us, but we no longer know where is.

We met two American girls on the ferry, who we talked for a majority of the six-hour ride. We then ran into them at Paradise beach and spent the afternoon dancing on top of a bar with them. They are still with us.

Three of us wandered around the narrow streets of Mykonos carrying double-sized bottle of Mythos, the mediocre national Greek beer. We found our way to a hip club, Scandinavian Disco, only to find it filled with dudes. It was nice to hear American hip-hop from nine months ago, though.

As soon as I'm done writing this, I'm going down the hill to rent an ATV and drive around the island for a couple hours. Then I'm going to the beach. Tonight, there's a huge party on Paradise Beach known as the Full Moon Party, where the whole island is going. Tomorrow we'll be in Berlin. Holy shit, I guess I really am in a storybook.