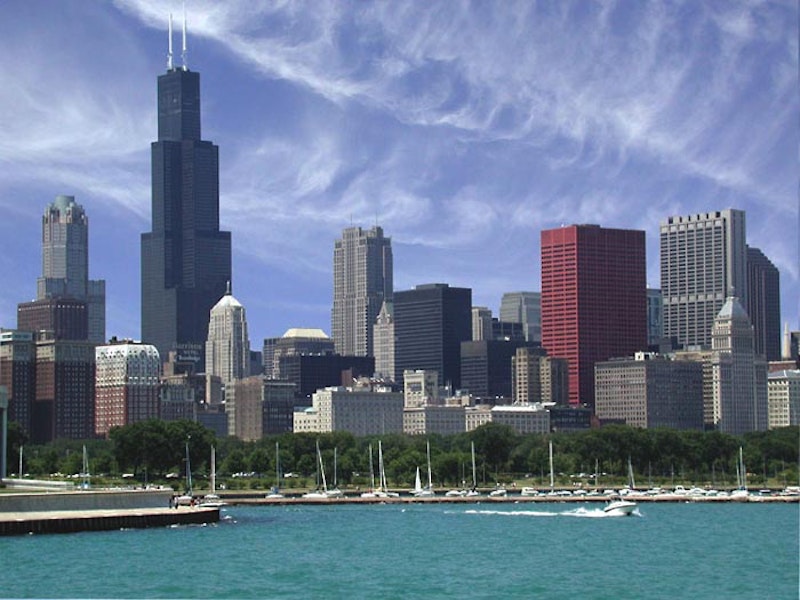 I’ve been to Chicago a lot in the past few months, and every time I come here I start to semi-question living in New York. Not fully question, just semi-question. Like why do I pay so much to live in a tiny box—albeit a very hip box? Wouldn’t it be better to just enjoy life in a place that’s cheaper and easier to live? Probably. But! I have this neurotic thing where I connect leaving New York with failure. I know, I know. It’s totally stupid and doesn’t make any sense. I just feel like I’d have to leave New York for someplace even more fabulous, such as London or Berlin. But if I did leave New York for another American city, Chicago would be at the top of the list.

I’m in Chicago right now at an academic conference, and the place I’m staying in is this huge loft with exposed brick (I die) in Wicker Park, which is basically Chicago’s Williamsburg. And let me tell you: I am in love with Wicker Park. It’s full of trees and hipsters and art and live music, and there’s this one coffee shop I love on the main drag called The Worm Hole with a Back-to-the-Future car crashed in the window.  A stroll down Milwaukee Ave. will lead you past Urban Outfitters, Aldo, and Steve Madden, but also, if you look closely, past the history of Wicker Park as a place that has always been a bustling center of commerce. You’ll see signs and marquees and storefronts from another era that haven’t been touched or torn down, adding a vintage feel to the otherwise fully gentrified neighborhood.

But probably my favorite thing about Chicago is that even though it’s smack dab in the Midwest, an issue, you still get a definite sense of being in a densely populated, international city. Some places, like Los Angeles for instance, are huge but just don’t feel like cities. When I lived with my grandmother in St. Louis, #notacity, I would often go up to Chicago for orchestra and I remember thinking it was one of the biggest, most impressive cities I’d known. The city felt ambitious and made me want to work harder because of it. And I’m convinced that that sense of bigness, of scale, is really important for young, dreaming, creative minds. Skyscrapers can tell us a great deal about how ambitious a city is in its own right—how it defies its geography, topography, its whatever, to overcome the odds and imagine the impossible. Could we say that the cities with the most interesting, tallest skyscrapers attract the most ambitious, creative people—or brings out the ambition in people, especially if we take the skyscraper as a metaphor for the power of imagination?

I saw some of that imagination last night at Berlin, a famous Boystown nightclub I went to with some friends that has been the home of queer lifestyles for decades. Like I always say, no matter what kind of club you’re into, the real party is almost always outside, and last night Berlin was no different. Trannies and drag queens emerged out of taxis right outside the bar, like mini-celebrities—everybody seemed to know who they were. I showed up working a Patricia Field purple sequin fanny pack, honey—my new BFF—and felt right at home around these Beautiful People, you know, boys in high heels, strange make-up, various levels of drag, and all kinds of other fabulous weirdos dancing to great dance tracks. Some girl commented on the eight-inch long earring I was wearing, and another chick smacked my ass. So I guess that means the night was a roaring success.

Sure, Chicago has parks and monuments and museums and culture and all that very important stuff. But let’s be real. The most important factor in deciding whether to move to a place is how hot the other people who live there are. I said it. Nobody wants to live in a place where the majority of the folks there are ugly and your prospects of getting nicely laid are none. That’s why cities, especially ones that are gentrifying such as Philadelphia or St. Louis, play up the local bar and club scenes—and why those scenes bring so much money to cities. They want you to know that if you live there, you will get laid.

Anyway, I think Chicago is something like America’s most fabulous, forgotten city. I say it’s the forgotten city because as international as it is and as much as goes on here, it’s still in the middle of like nowhere and it’s surrounded on all sides by red states and cornfields, which, come on, are not really that interesting.