The World With Roaches

Alan Weisman's The World Without Us imagines a future in which humans are extinct. 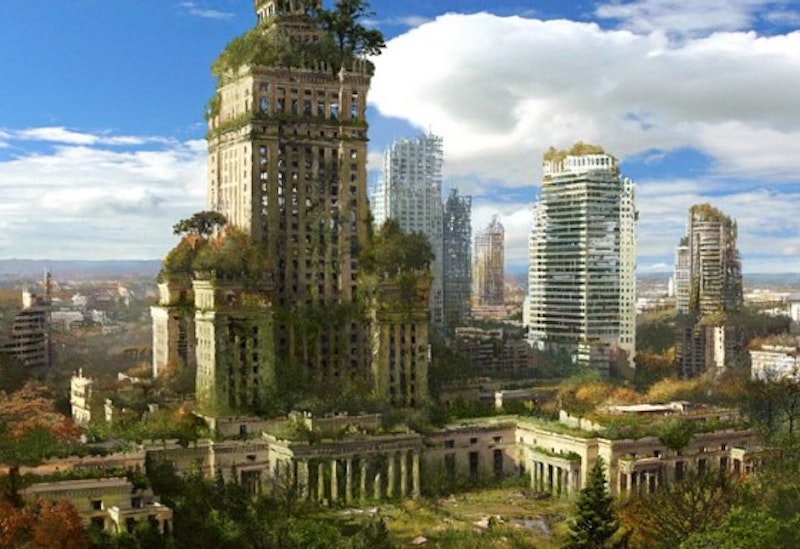 For reasons which remain largely a mystery to me, I’ve been obsessively watching episodes of the godawful Heroes television series. You’d think I’d have known to stop right away when first episode, opening scene is of some earnest scientist nattering away about how cockroaches, not humans, are the pinnacle of evolution, and how these nasty little crawling critters are deterred by neither sleet nor snow nor nuclear fallout, like some sort of post-apocalyptic six-legged egg-laying postmen.

Sci-fi writers love the cockroach, and the cockroach loves them back. In fact, the cockroach loves us all, because the fact is that the roach will not survive long after we’re gone. On the contrary, the truth is that the cockroach will flip over on its back, put its legs in the air and expire a week or two after we turn off the central heat. Roaches are human parasites; they thrive in such numbers because we kill their predators and provide them with food and climate control. They’re not even resistant to radiation; we’d survive a nuclear holocaust far better than they would. It’s true they’re a triumph of evolution, but that triumph isn’t durability. That triumph is us.

I learned about the roach’s limitations in Alan Weisman’s 2007 ecological thought-experiment The World Without Us. The book imagines what would happen if humans suddenly disappeared, examining how long it would take for the sea to reclaim Manhattan, or for elephants to repopulate Africa, or for cats, dogs, and roaches to go the way of the dodo.

The subtitle of Thacker’s book is, in fact, The Horror of Philosophy, Part 1, and what he is trying to do in part is to use ideas from horror to construct a philosophical vision of the “world without us.” He references a dizzying array of texts, from pulp horror to black metal to medieval mysticism, to approach these ideas, but one writer he returns to repeatedly is H.P. Lovecraft. Lovecraft is infamous for his lumbering prose and cosmic pessimism; his conceptualization of a universe in which heavy, nameless adjectives slither across vast, hideous paragraphs in pursuit of nameless and inhuman dooms. Lovecraft’s also particularly interested in a kind of world without us — his stories focus on vast forces with unknowable motivations and unspeakable corporalities, great cyclopean blanknesses that humans cannot see without going completely mad.

As the above suggests, it’s very difficult to talk about Lovecraft without putting your tongue at least a little in your cheek. Thacker manages it, though, which is both impressive and somewhat off-putting. Indeed, Thacker’s tone throughout is hard to parse.  With his welter of eclectic sources (Marlowe’s Faust, Keiji Haino, J.G. Ballard, anonymous internet poetry) he’s clearly being an eccentric philosophical genius in the Slavoj Zizek mode.  But where Zizek makes his personal investments very obvious (Lacan, Marx, Hitchcock, St. Paul), Thacker’s are considerably less evident.  He doesn’t seem to want a revolution, and though he raises ecological issues, he doesn’t exactly have an ecological program. Nor is he interested in a Freudian reading of horror to understand human beings — he doesn’t even reference Kristeva or abjection. So if we’re not changing society and we’re not changing the plaent and we’re not changing ourselves, what exactly is the point?

The point is, somewhat disappointingly, no point. In his summation, Thacker insists that he is making mysticism “relevant.” He then goes on:

“But the differences between this contemporary mysticism and historical mysticism are all-important.  If mysticism historically speaking aims for a total union of the division between self and world, then mysticism today would have to devolve upon the radical disjunction and indifference of self and world.  If historical mysticism still had as its aim the subject’s experience, and as its highest principle that of God, then mysticism today — after the death of God —would be about the impossibility of experience, it would be about that which in shadows withdraws from any possible experience, and yet still makes its presence felt, through the periodic upheavals of weather, land and matter. If historical mysticism is, in the last instance, theological, then mysticism today, a mysticism of the unhuman, would have to be, in the last instance, climatological.  It is a kind of mysticism that can only be expressed in the dust of the planet.”
There are echoes of Nietzsche here in the death of God, and of paganism in the gesture towards the climatological, and of Lovecraft in the unhuman, and even of Zen in the paradox of the experience which is no experience. But despite Thacker’s insistence, it’s not really clear to me why mixing together all these different nihilisms adds up to a different, more contemporary zero. Nor does this amalgamation of nothing seem particularly terrifying.

The truth is that a nothing, even if (especially if?) it references multiple philosophical traditions, just is not especially scary. This is why Weisman’s World Without Us isn’t horrible at all. While Weisman’s world from which humans vanish is certainly inspired by apocalyptic and doomsday narratives, his book ends up devoid of anything like terror precisely because he refuses to talk about people.  The world without us, as a world actually, truly, without us, is a peaceful, even beautiful place. There’s nothing worrisome about the rainforests regenerating. There’s nothing frightening about roaches dying out. Nuclear reactors melting down kind of sucks for the biosphere, and you certainly feel bad for the animals stuck with our waste, but it doesn’t give you a sense of cosmic dread.

Which is why the thing in Lovecraft that is The Thing, the terror that has no name, is not a world without us.  Rather, it’s a world without us that is still us. As Roethke says, “something is amiss or out of place/When mice with wings can wear a human face.”  The vampire, the ghost, the zombie, the crawling thing that says our name. When you’re here, you’re here and that’s okay; when you’re gone, you’re gone and you don’t care; but if you’re stuck halfway in between, you’ve got a campfire tale to keep the kids awake.

Erasing God does not leave a world without us. It leaves a world in which there is nothing but us, in forms we can neither entirely recognize nor entirely disavow. Our arbitrary cruelty, our indifference, our amorphous fluids leaking out to stain the stars. We say the roach is our alien successor, but in fact it’s our familiar image, scuttling out across the planet in its numberless hordes. In Lovecraft’s “The Shadow Over Innsmouth,” the human narrator sloughs off his mortality and wades into the ocean to join his monstrous, alien kin. “We shall swim out to that brooding reef in the sea and dive down through black abysses to Cyclopean and many-columned Y’ha-nthlei, and in that lair of the Deep Ones we shall dwell amidst wonder and glory for ever.” That’s the horror; not that the depths of the world don’t care about us, but that they do; not that someday, somehow, somewhere, the planet may be free of us, but that it never will — that we, and the roaches, will be here intertwined forever.