Otherwise Known as the Human Condition: Selected Essays and Reviews, by Geoff Dyer, is a collection for "the college knockaround, the post-grad pothead and the forty-something actuary with a penchant for good film." 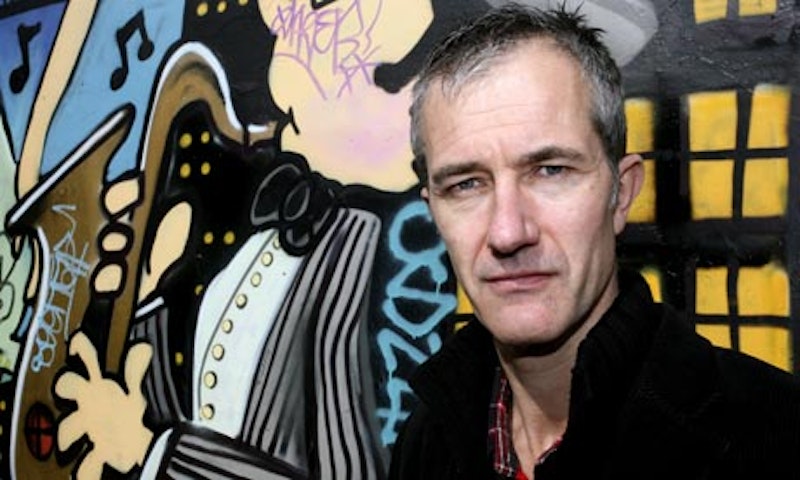 A book of essays, whether by a single author or a group, feels at home more in the classroom than it does on the nightstand. A decent introduction or prologue might offer a unifying template for the reader: an umbrella of understanding under which the following disparate ideas, now brought under the same roof, take new meaning.

A good collection of writing can be an able mental paperweight—that is, your nightstand supports a solid triangulation of political thought or chicken soup for teenage problems or classic non-fiction writing. Active thinkers, then, can simply head over to the bookstore and pick up several hundred pages of nuanced thought within a given genre or time period. This certainly isn’t bad; what feels more comfortable in the classroom isn’t less important outside of it. That gray and green and gilded Encyclopedia Britannica set was as much a weekday book report crutch is it was a repository of weekend daydreams. Someone went out and pulled all of these facts and figures together. Just because you or I didn’t go to Peru to learn about Incans first-hand doesn’t cheapen the fact that we can cross the living room floor and pull out the “I” section from the shelf.

But it’s difficult to see a collection of essays not think of the commercial aspect of its contrivance. The best political writing of 2007 isn’t going to bear all that much difference from the best political writing of 2008, other than the cookie-cutting of chronology. The best science writing in 2002; the best essays of Orson Welles; the collected writings of whoever—there’s an air of “It’s okay that you missed all this when it first came out. We went and collected it all for you,” not unlike Numero Group or Mississippi Records doing all the vinyl crate digging we wish we knew how to do and for which we don’t have the time and the energy and the knowledge.

A collection of essays is a doorstop. In the rush of periodicals and monthlies and The Christian Science Monitor and www.longform.org, the collected is a means to, briefly, stop time so as to allow the reader to catch up on things after the fact, or freeze-frame the world of ideas around a concept or a byline.

Otherwise Known as the Human Condition: Selected Essays and Reviews, by Geoff Dyer, doesn’t break this mold so much as it consciously emulates it. “The more varied the pieces,” Dyer writes in his introduction, referring to the large array of genres he covers (his italics), “the more obvious they needed to be seen together as the work of one person—because the only thing they had in common was that they were by that person.” This is admirable. Dyer isn’t looking for the unifying template; he’s saying that he’s written a ton of stuff and it’s good to collect it all between book covers—indeed, this collection is the culled selection of two previous collections. He embraces the vanity of it all, though not to the degree of, say, Chuck Klosterman collections, which include addenda and other various notes written after the fact as way to contemporize and contextualize the writings.

But after the short introduction, the reader and his or her nightstand are left with the problem of access. Do I just flip open the paperback cover and go? Do I skip around and dog-ear the better or more personally relevant selections? There’s no right answer, and Dyer’s collection eschews a chronological order in favor of quaint, alliterative genres: visuals, verbals, musicals, variables and personals.

Dyer’s work is a testament to, in the words of Rumpus advice columnist Sugar, the mantra, “write like a motherfucker.” It’s intimidating; reviewing this kind of book pretty much ensures that the reviewer must face a bewildering compendium of stuff—war photography, environmental art, activism, books, films, films about books and books about films. Dyer is a writer’s writer, a thinker’s thinker. He is able to emote, empathize, explain, and self reflect. He’s able to reconcile the conceit of the cultural critique: everything is subjective, so why not reveal what kind of skin you have in the game? Why not explain, in plain personal terms, why a Southwestern desert floors you? Why not go to lengths to explain why jazz hits you so hard?

At my college newspaper, the editors would put on their professor caps and go on and on about finding your “voice” as if we had any idea what we were talking about, as if we had had in fact found our own voices. Otherwise Known as the Human Condition is a must read for the college aesthete, right next to any one of Chuck Klosterman’s compilations. Glibness is an important thing to understand—important because it’s something a young writer should either embrace to the point of no return (Chuck) or calmly shelve in pursuit of cultural reportage. Dyer’s work is for the college knockaround, the post-grad pothead, the forty-something actuary with a penchant for good film, the history of art major with a penchant for politics, and the soon-to-be reporter with a penchant for Halo. Dyer reports on the human condition. It’s a silly cliché anytime someone taps out the characters that comprise the words “human condition,” “zeitgeist,” and … “zeitgeist,” because ultimately such an act is self-reflexive—cultural writers are all part of this thing on which we wish to report.

And now Dyer is writing for The New York Times; his column is—I don’t know what the hell the “editors” were thinking they were trying to explain when they offered this a few weeks ago:

Beginning this week, Dyer will write a regular column for the Book Review, “Reading Life,” detailing the ups and down of his long relationship with the written word. What do we do to books and what do books do to us? How do they delight and derange?

Right. Well, it’s okay that this introduction is pretty much bullshit. The Times has to suffer through paragraphs like this one in order to be the daily newspaper of cultural record. And it a weird way it’s appropriate that Dyer’s opening column is not that good.

But that’s the point; the reporting of culture and the critique of expression is as difficult as the actual production of the culture and expression in the first place. A tip of the hat to this Brit for doing it, for nosing the grindstone back up the hill toward the ideal of knowing things. The human condition, nightstand edition—worth picking up, worth putting down.