The Only Rights You Got is Lefts

When the going gets tough, the tough guys get weird. 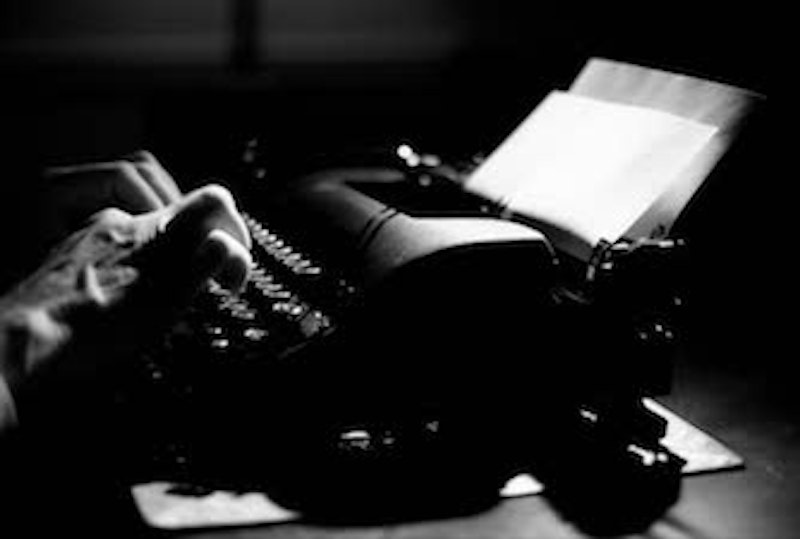 The 1950s prose poet puked into his bedpan, pulled up his filthy white briefs, put on his turtleneck sweater, stroked his beard and finally situated himself before his typewriter. “Would that I could be your gold-plated pearl-faced wristwatch,” he dictated aloud to himself as he typed, “But that I could slide down your forearm the skin so soft and sweet and perchance fall off so that you might bend over and pick me up with a touch so gentle.”

“Are we friends ’til the end, Teddy?”

“Friends ’til the end, George.”

“Hit me up on my celly if you want to get in touch with me, ’cause I’m never ever home,” Camden Camden said to the mismatched pair. “Bye, boys!”

James Dean didn’t like being named James Dean. He hated it, really. Why did his parents have to name him after a cultural icon? “This all stinks,” he whined aloud. “Cammy, why are you leaving so soon?”

“What exactly is your problem, kid?”

“Whatever, loser. My boyfriend and I are going to have a great life together.”

“Uh… great. I hope you and your boyfriend are very happy.”

Mickey Rourke glanced at the sheet of paper in his hand, nodded and then addressed the few other people who were in the room. With a tough guy stare and a hoarse voice, he said, “Yeah, punk, you heard me—I’m Jack Chaser, Detective Death. Whaddaya know about it, dipshits?” he paused. “Nothing, huh? You wanna play dumb?” he asked with a laugh that was like unto a distant peal of thunder. He then made a pistol with his thumb and forefinger. “Howzabout I make you and your whole mob play dead?”

Oscar Berkman picked up an old tin can emblazoned with the likeness of burly pro wrestling champion Eddy “Flap” Jacks and gave it a good long once-over. “Tis a fine can,” he said aloud. “Tis a fine can indeed.”

“Why is that man talking to himself?” Camden Camden asked her boyfriend.

“I dunno, boo,” the boyfriend answered, giving his “boo” a squeeze. “Try not to look at him.”

“Ever seen a can this nice afore?” Oscar asked the pair as they passed by. “Hmm? That’s the world’s champion right there, folks. The spitting image, as it were.”

The Evil Genius finished mixing his extra dry apple martini with his plastic-tipped cigar and then sucked the excess liquid from the tip of said cigar. “Mmm,” he intoned softly. He then stuck the cigar back in the breast pocket of his white laboratory coat and took a sip of his drink. After a long, satisfied sigh he addressed his protégé, Brian Powell. “So, what do you think of my little plan?”

The Evil Genius’s protégé was a bit confused. “Umm… I don’t think you’ve really explained it to me.”

The Evil Genius smirked and chuckled condescendingly. Suddenly he beamed with the life of a dozen radioactive infants. “Oh, but I have!” he exclaimed, punctuating his declaration with wild gestures of his arms. “I have!”

Brian Powell could only fidget and laugh nervously. Fidget nervously and laugh nervously, that is. Had nerve toxin been leaking into the room? he wondered. It would certainly explain the facial tic and audiovisual hallucinations he’d developed.

“I bought a suicide for a dollar, Randy,” the young man said to the bartender, whose name was Randy and who always wore extremely tight blue jeans with a belt and a white-and-red-striped knit shirt. He certainly didn’t need a belt to hold up his tight jeans, so why did he always wear one? Furthermore, why did he always wear the same shirt like he was a recurring stock character in a comic strip?

Randy smiled politely and poured the young man another pint of Guinness. “Not gonna make any trouble, are you, kid?” he asked softly.

The young man smiled sadly as he sipped his dark libation. “Mmm, no, no.”

Randy nodded. “Let me know when you’re ready for that ham sandwich.”

The young man nodded, too. “Randy, do you mind turning on the TV? I think TNT is showing that true crime movie about the redneck sheriff.”

“You bet, kid,” Randy said as he turned on the “telly.” “Heard it’s a real good one, too. That’s why they call these ‘movies for guys who like movies.’”

[THE REDNECK SHERIFF, as played by W. Earl Brown, GRABS BRIAN POWELL, as played by 1980s-era David Bowie, by HIS THROAT and SLAMS HIM against THE DOOR.]

THE REDNECK SHERIFF—Boy, I got half a mind to split’cho skull with mah bare gatdamn hands.

[BRIAN POWELL, now played by a 1970s-era Brad Dourif, KNEES THE REDNECK SHERIFF in THE GROIN and RUNS INTO HIS APARTMENT. THE REDNECK SHERIFF DROPS TO ONE KNEE TEMPORARILY, but not for long—HE'S UP in A FLASH, moving with a GRACE THAT BELIES HIS BULK!]

[THE REDNECK SHERIFF STORMS THROUGH THE TINY KITCHEN, KNOCKING DISHES and SO FORTH onto the FLOOR. HE TURNS into the ONE LARGE ROOM of THE EFFICIENCY APARTMENT and GRABS POWELL, who is ATTEMPTING to SALVAGE SOME of HIS RECORDS. He THROWS POWELL on THE BED.]

THE REDNECK SHERIFF—You ain’t nothin’ but a citified, punk-ass carpetbagger.

[He SLAPS POWELL. POWELL KICKS HIM IN THE GROIN AGAIN. THE REDNECK SHERIFF GOES DOWN. POWELL LEAPS to HIS FEET and SPRINTS OUT THE APARTMENT and DOWN the FIRE ESCAPE.]

“Ya nay-buhz said you was weird, boy,” The Redneck Sheriff, now played by some combination of Joe Don Baker and Tom Berenger, said loudly. “Kept to yaselfs, kept pec-yoo-luh hours… No friends, no job, just watchin’ that pro wrasslin’ all day and rubbin’ yourself… what gives, boy? Ain’t that all a mite pec-yoo-luh?”

Powell smoked his unfiltered Chaser’s Black Death cigarette nervously. “What am I being arrested for, then? Being unpopular? Being president-for-life of the Eddy ‘Flap’ Jacks wrestling fan club?”

“It don’t concern you any more than why them seagulls follow the trawler, nelly boy,” The Redneck Sheriff answered.

“I… I have rights! I have the right to know what I’m being arrested for!” Powell stuttered and stammered, looking around nervously.

The Redneck Sheriff threw his matchstick against the wall. “Fuck your rights! The only rights you got is lefts!” he shouted in his powerful Southern baritone, leaping to his feet and smashing Powell in his prominent proboscis with a big ruddy left hand. He then held Powell’s bleeding head to the table and leaned in close, waving his finger in Powell’s eye as he said, “You know damn well what I’m talkin’ about and if you wanna see what these arms of mine can do…”

“Somebody YOU told YOU wanted to see dead—two people, actually—are DEAD, BOY. You got a great big guilty sign hangin’ around yo neck,” said the Vietnamese Sheriff, as played by retired mixed-martial arts star Cung Le. He finished off his mason jar of green tea and set the empty jar on the table. “Better fer yo sake if you jes fess up right now.”

“Wait, so it’s my fault every time somebody dies in a car wreck?” Powell asked, beside himself with fear.

“Cute, boy,” the Vietnamese Sheriff said, shaking his head. “It is yo fault if they’s brake-lines is cut, which they was.”

“I know you didn’t pull this yoself. I know you had somebody witchee,” the Vietnamese Sheriff said, sticking a new matchstick into his mouth and chewing it. “That one… that big bruiser had to have been about 200, 300 pounds. Scrawny little fucker like you? No way you done that by yo own self.”

“The only thing I’m guilty of is being white! You filthy racist! All of you Vietnamese cops are racist!” Powell screamed.

The Everyman Sheriff, as played by Dwayne “The Rock” Johnson, shoved his service revolver in Powell’s mouth. “One in six, boy,” he said, pulling the trigger three times afterward. Powell wet his pants and began sobbing. The Everyman Sheriff pulled the gun from the scrawny, blubbering wimp’s mouth and said sternly… tersely, “Gimme a name, jabronie.”

“The only rights you got is lefts,” Dr. Jonas Ruggleteapot read to the respectful, captivated graduate students in the audience. “Does anyone know what Brian Powell meant when he wrote this?”

No one answered the professor. Not that it would’ve been their place to do so, since the audience was forbidden to participate in order that Ruggleteapot might look more intelligent when he asked these questions. No one could answer them, it would appear on the videos of these lectures, save the great and powerful Dr. Jonas Ruggleteapot!

“I thought not,” he said, smirking in a very condescending sort of way. “What he means,” he said, stepping away from the podium and gesturing with a crooked finger, “Is that everything he—read: Powell—holds to be right is, in fact, the opposite of right—read: left or, more accurately, wrong. Some scholars have argued that the line is a comment on the lack of rights afforded to those held in police custody, but this is most assuredly a minority view. I’ll direct you to page 912 of The Brian Powell Story for evidence against that argument. The second sentence of the first paragraph reads as follows…”