The Nasty World of Online Chess

Hurt feelings lead to players taking the gloves off. 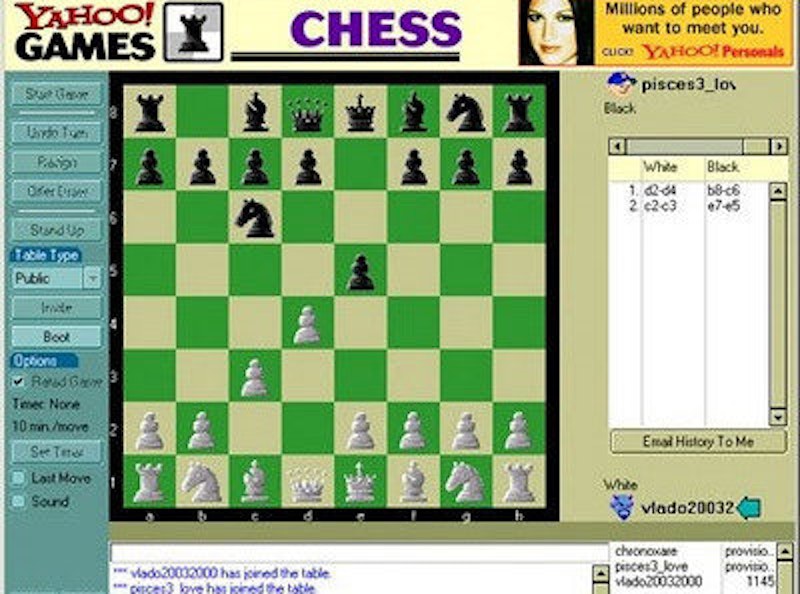 I got pretty good at chess by playing online via Yahoo. I started with games in the Camel Club venue, which had a chat room where I assumed chess players would spend their time discussing such matters as fianchettos, the Sicilian Defense, and queen sacrifices. Contrary to my expectations, the chat room more closely resembled a sixth grade playground.

Camel Club, like any social group, had both major players and fringe characters. One person cleverly called himself "Dick Johnson," and claimed to listen to one song all day long—Journey’s "Oh Sherrie." Dick's shtick was to regularly claim, with faux outrage, that he’d just been sexually harassed by his male chess opponent, quoting something inappropriate the guy had allegedly said to him. And then there was Smeg, a 35-year-old pizza delivery man who could only come to Camel Club from the library because a woman he used to have phone sex with—another Camel Club regular—had gotten some hackers to fry his home computer after their estrangement.

The towering figure of the chatroom was known as "Chief." Chief, a colorful individual in his mid-40s, was a lawyer specializing in software issues. Before that, he was a juvenile delinquent, and then a touring musician. He was what chess players derisively call a “pawn pusher,” perhaps the lowest form of chess. I always speculated that he learned to play this "jailhouse chess" at some juvie facility back in California in his teens but, despite his mediocrity at the game, he was still able to dominate Camel Club with the force of his personality. Somehow Chief found time during his workday to type hundreds and hundreds of words in the chatroom. He was a novelist's dream, typing away like Jack Kerouac on Benzedrine, sharing details of his private life. Stuff like his wife getting busted for shoplifting, fights with his boss, and numerous sexual conquests.

The other alpha male of Camel Club was the vain and egotistic “Superfisto,” a skilled chess player and avid chat room pugilist. Superfisto loved bragging about his good looks (unlike Chief, who claimed to be fat) and sexual and physical prowess. Although I didn’t participate much in the chatting—I had no status—Superfisto attacked me when I did. When I found out he was a recent college grad, working at Blockbuster and living with his mother, I blunted his assaults, dubbing him "Blockbuster boy," and then "Eddie Munster," owing to his widow's peak.

Superfisto was very tight with Chief when I first started, but their friendship eventually went sour and things spiraled out of control, fuelled by their mutual egotism and combativeness. They started looking for ways to hurt each other. Superfisto posted a number of photos of himself for all to admire, which turned out to be a key strategic error. He’d mentioned several times that his mother was a professor at UC-Riverside, so Chief went to the school's website where all faculty members had photos posted and identified his mother by her obvious resemblance to Superfisto. He then called mom and spilled some good dirt on him. He was able to identify Superfisto's Army recruiter (he was in the process of enlisting) by info he'd revealed online.

Chief had quickly scored an effective one-two combination on his adversary. He’d asserted his dominance by playing rough, and Superfisto was stung. He was drifting in post-college life, and was desperate to join the Army. Although Superfisto appeared to be on the ropes, he had plenty of fight left. Chief was vulnerable too, having dropped plenty of hints in his unfiltered ramblings as to which law firm he worked at in Nevada. Superfisto did some Googling and ended up calling “Ken”—the boss Chief often mentioned—and told him his software specialist was spending most of his billable hours every day hanging out in a chess chat room. Ken responded not by firing Chief (I’m guessing he was brilliant, and a productive attorney), but by erecting a firewall which prevented Chief from entering the Camel Club. Superfisto had struck back hard and done the unthinkable. Chief was reduced to appearing in Camel Club after working hours, when the major players were no longer there.

But Superfisto was soon to get his own comeuppance, when another of his enemies discovered his identity and doxxed him, posting all kinds of personal information. His mom got phone calls from Internet freaks at her office, and there were other repercussions. I felt so sorry for him that I befriended him, putting aside all the nasty things he’d said to me. It was time to stop coming to Camel Club though. The last time I chatted online with Superfisto, he was at an Army base near Virginia Beach. He invited me to visit him, which I never did. As for Chief Infidel, he said he’d left Ken behind and gone off on his own as an attorney, so no more firewalls for him. The place I play chess online now has no chat room.