The Moscow Crackdown is a Sign of Social Health 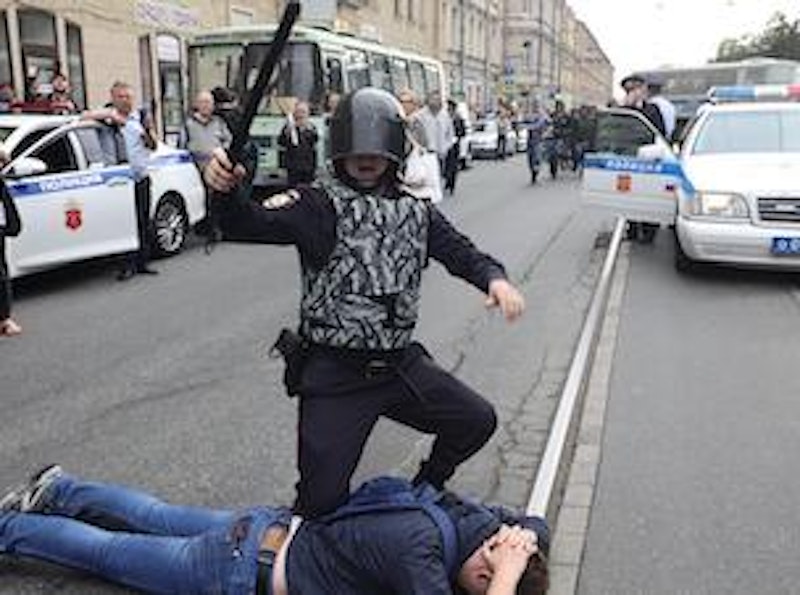 Interesting events in Moscow last week. It improved my mood to see the Russian authorities crack down on those young anti-government protesters, as depicted in this video that’s been making the online rounds.

What do we see in that clip? A government motivated to protect its own own community against the provocations of those who would attack it. Also a police force aware of whose side it’s on—its own side, and that of the conservative majority of its own people.

There’s no spirit of evasion or euphemism in this video. The Russian police here aren’t trying to hide anything. They’re attacking these feral and decadent children in broad daylight, and making, as far as I can see, no attempt to smash smartphone cameras or otherwise interfere with photographers recording the scene. Guilt is something that doesn’t enter into the healthy sensibility of the Russian policeman. There is only will, incarnate in action, and motivated towards the end of destroying evil, so to create space for the development of what is good.

Quibble with me if you want, but to me all of that adds up to a stern sort of beauty beauty.

It probably doesn’t need to be said that this police “violence”—really it’s a defensive response to violence, specifically the conceptual and philosophical violence of the young anti-Russian protestors—is precisely what makes so many of those of us who have converted to Russian Orthodoxy proud to have done so. (Along with, to be sure, the liturgy, the sacraments, the sonorous pleasures of the Orthodox chant, the iconographic tradition, the beautiful theological treatment of Mary, our Divine Theotokos—I could go on and on.) But if there’s pride, there’s also a melancholy. The foreign convert to Russian Orthodoxy, marooned amidst the fleshpots and godless consumer wastelands of a decadent West, will after all feel the lack in his own country of such a doughty conservative regime as the Russian one.

Which raises the question: Could such a regime as Russia’s take root in the West? In the U.S., for instance?

It’s remarkable how often I find this question coming up recently—after mass on Sunday, with fellow conservatives at the farmers’ market on Saturday mornings, in online forums that lean towards the traditionalist right. The popularity of the question itself indicates how things are changing. In a socio-political regime that, like ours, is rapidly decaying, new energies and new ideas are loosed in the air. The range of possibilities expands.

The simple answer to the above question is that the Russian system’s virtues are intimately connected to the Russian people’s virtues, and the Russian people are there, in Russia, and not here. And yet the rightward drift of American politics more and more gives us reactionaries reason to believe that it can happen here, to borrow a phrase. Of course, when it does happen here—when a truly conservative regime, defined by our values, reigns in Washington—it will happen in its own American way, in a way that’s specific to our own cultural context and peculiarities. It will be as recognizably all-American as violence and apple pie.

Our job as politically interested paleoconservatives will be to midwife this new order, when it emerges, and then nurture it towards strength.

It’s a cliche to say that time passes faster as one grows older, but there’s a truth in it. Or so one notices as one gets deeper into one’s 60s.

Just last week I recall looking over our field of organic rye and being struck by the tenderness of the green shoots. Yesterday, walking in that corner of our property again, I was startled by the fact that we are now in possession of a mature crop of this noble grain, ready for the rigor of Mother’s harvesting scythe.

I noticed, too, upon emerging from the back-field outhouse this morning, “stowing my pecker” in the vernacular of our rural Hoosier neighbors, that startlingly cool air was playing around the sockless feet in my sandals. Just the previous week my “digits” had been suffering in the humid heat.

So it is that the time of the cutting of the rye is almost upon us, auguring the end of summer. In the words of the Testimonyof Saint Tikhon of Lutsk: I see the curling of the bark of the birch, for it is His will; I see the expiration of the dung beetle, for He has decreed it; I hear the lamentation of the woodlark, calling out summer’s end, for He so disposes.