You can meet a lot of people promenading up Broadway. 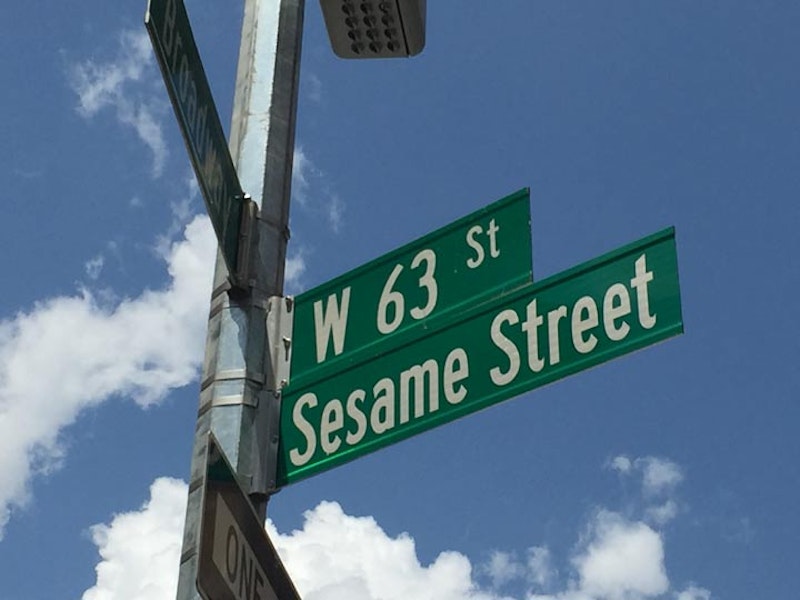 Having worked in the Columbus Circle/northern Hells Kitchen district since May, I was getting a bit tired of exploring the W. 50s between Broadway and 10th Ave., and set the compass north, wandering on Broadway and then Columbus Ave. (which until 1890 was plain old 9th Ave.; in a spirit of civic mindedness and real estate promotion, the city renamed 8th through 11th Aves. in geographical, patriotic and historic themes). This is the southern end of the vast Upper West Side, which means everything in Manhattan from Central Park to the Hudson River between W. 59th and 110th Sts.

At W. 63rd St., nearing Lincoln Center, I spied a new Sesame Street sign at Broadway and W. 63rd St.. So this is where it is! I’d always wondered. The city decided to honor the long-running kids’ show in late April, permanently renaming the corner, for its 50th anniversary. The show’s offices, known as the Sesame Workshop, are located at nearby 1900 Broadway. Various characters, including Big Bird, Ernie, the Count, and original host Bob McGrath showed up for the unveiling ceremony with Mayor Bill De Blasio. Since radio personality/detective/actor Bo Dietl has been calling De Blasio “Big Bird” since he was elected in 2013, it was a case of Big Bird meeting “Big Bird.” 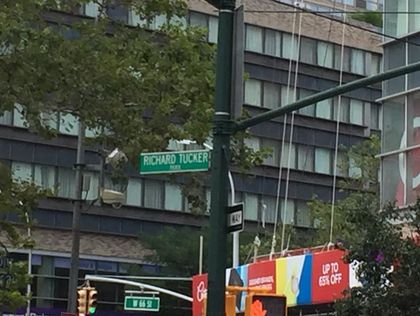 You can meet a lot of people promenading up Broadway. Richard Tucker Park occupies the triangle formed by Broadway, Columbus Ave. and W. 66th St. Richard Tucker (1913-1975) grew up in Brooklyn and realized a gift for music early on, becoming a tenor singer and performing at bar mitzvahs and weddings, later becoming a professional cantor before joining the Metropolitan Opera, where he specialized in parts in Italian operas for 30 years from 1945 until his death, and recording for Columbia. His funeral was held onstage at the Met, still the only singer to have that honor; he’s buried in Mt. Lebanon Cemetery in Queens. 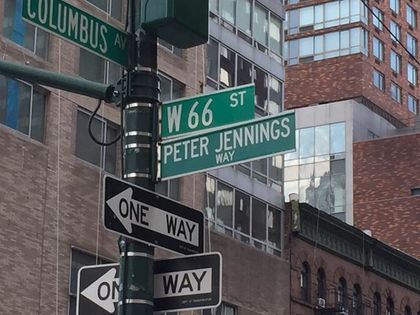 Directly across the street at Columbus Ave. and W. 66th St. is ABC News headquarters, where Peter Jennings Way honors the anchorman (1938-2005). Canadian by birth, Jennings began his career in Ottawa and became the youngest person to anchor an evening network news broadcast for ABC at age 27 in 1965. After his original anchor stint, he reported from the Middle East beginning in 1968, helping to make ABC News a powerhouse along with sportscaster Jim McKay when terrorism invaded the 1972 Summer Olympics in Munich. Jennings returned to the anchor chair in 1978 and became one of the three long-running evening network anchors along with Tom Brokaw of NBC and Dan Rather of CBS. In his decades of reporting, he got both conservatives and liberals angry with him, a mark of excellence. His last notable news story was, of course, September 11, 2001—he remained on air 17 straight hours. He died of lung cancer in 2005, and was honored by NYC at ABC News headquarters here a year later. 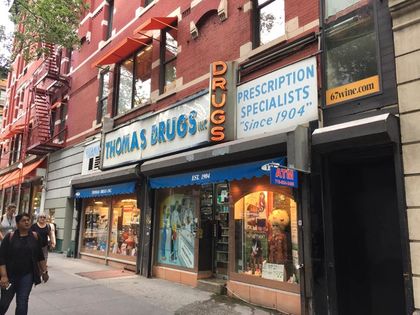 The pair of flashing “DRUGS” neon signs drew my eye to Thomas Drugs at 171 Columbus Ave., near W. 67th. Another sign bills the pharmacist as having been here since 1904. What did it look like back then? 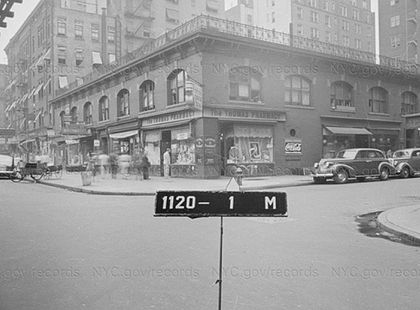 I don’t have any photos of the building in 1904, but I have one from 1940 from the NYC Municipal Archives; in those days, Thomas held down the corner at W. 67th. If you look carefully in the upper right corner, you’ll see part of the elevated train, the 9th Ave. El that rumbled up the avenue from Greenwich Village between 1870 and the early-1940s. No trace remains, as the 8th Ave. IND Subway, hosting the A and C trains, was built to replace it in the 1930s. 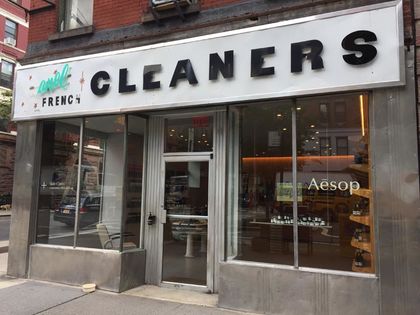 219 Columbus Ave. at W. 70th in the Upper West Side just looks like Caravel French Cleaners. The space was taken over by Aesop Skin Care. A trend in the past decade is to keep a classic sign even though the original business has moved out and even restore it good as new, though Aesop’s management has chosen to not replace the plastic letters that have fallen off over the years. 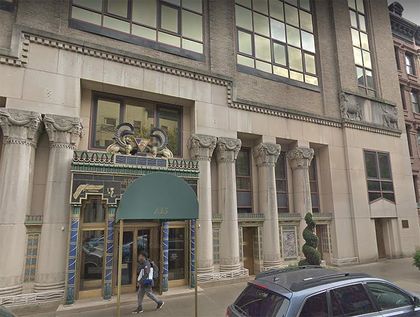 The fraternal organization Order of the Knights of Pythias was instituted in 1864 by Justus H. Rathbone and was the first such organization to be granted a charter by the US Congress. The name was inspired by the story of Damon and Pythias, an old story of loyalty: in ancient Syracuse, Pythias was accused of plotting against a tyrant, Dionysus I, and sentenced to death. Wishing to return home to settle affairs, Pythias asked the tyrant to allow him to do this, but believing Pythias wouldn’t return, Dionysus refused. Damon offered to take his place, and Dionysus relented on the provision that if Pythias didn’t return by the day agreed upon, Damon would be killed instead.

On execution day, Pythias arrived at the nick of time; explaining that pirates had captured his ship, he jumped into the sea and swam and ran to Syracuse to make his appointment with the executioner. Dionysus, so impressed by the pair’s show of loyalty, spared both. The Knights of Pythias claims over 50,000 members worldwide; Presidents McKinley, Harding and FDR have been members; New York’s Sen. Charles Schumer and US Rep. Peter King are also Knights of Pythias.

The Pythian Temple, opened in 1928 at 135 W. 70th St., is one of the masterworks of architect Charles Lamb. Dedication ceremonies were broadcast on radio on January 25th of that year. Lamb, usually associated with movie palaces, designed the Temple with the brio he usually used for his theaters. The ornamentation borrows from religious motifs of ancient Egypt, Babylon, Assyria and Sumeria.

On the second floor interior, a 1600-seat column-less auditorium was constructed. Meeting rooms and lodge rooms on the upper floors were also appointed with motifs similar to the ones found outside. When originally built, the Pythian Temple was largely without windows, mainly to accommodate the secretive organization. The story goes that the Temple, where Decca Records ran a recording studio, was the place where Bill Haley and His Comets recorded the 1954 smash “Rock Around the Clock.” 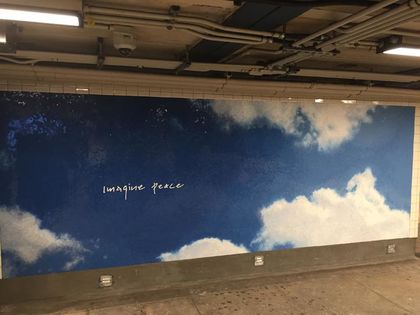 In 2018, the MTA renovated the IND 72nd St. station at Central Park West, below the Dakota apartment building, John Lennon’s home for the final eight years of his life. His widow Yoko Ono created images of a blue, cumulus-cloud filled sky, labeled simply with Lennon song titles like “Imagine” and “Remember.”