Thoughts on a spavined childhood. 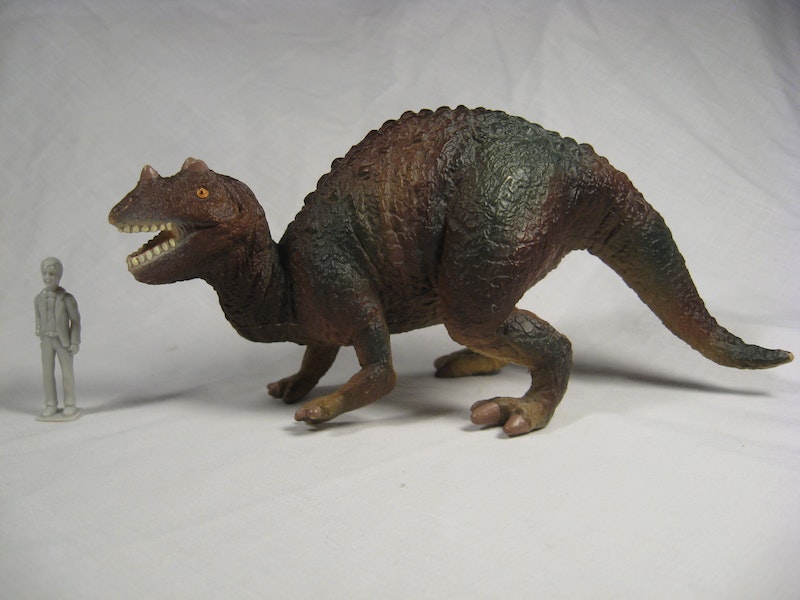 I was big on dinosaurs back when I was five or six or so. I had books with pictures of them, I had little plastic models. The models would be dull by modern standards. Each dinosaur was a solid color, chosen God knows how: blue, orange, red. Plus the models were small. Tyrannosaurus rex fit in the palm of my hand. But the things had what they needed. Teeth, plates, spikes, and tails—all present. Each dinosaur looked like the pictures.

By eight or nine, I was too old for them. But they sat there in my room with me. I don’t think I noticed them anymore. My quarters spilled over with things from the past, unwanted goods. They were like silt and they clumped every shelf and corner of my room. Then I began piling books atop. That’s because, at 11 or 12, I wanted to tackle various books that adults made a fuss over, but I wasn’t great about follow-through. The childhood relics were soon buried, one layer of silt beneath others.

Wedged I don’t know where was a clear plastic tub that was once meant to be a terrarium. In it were grains of purple imitation sand, a plastic manta ray (bubble gum pink), a sadly treated Scholastic Book Service paperback about Greek myths, a one-legged Plutonian space invader with a wire coming out of one hip, and a plastic dinosaur. I forget what kind the dinosaur was. It was a kind that stood upright and ate leaves from trees, if I recall. Being upright made a dinosaur more interesting, because more human and therefore more suitable as a proxy in make-pretend games. But eating leaves wasn’t that interesting, nor was a lack of spikes, wings, and so on. No wonder I don’t remember the thing’s name. Even so, it had hung on: olive green, the size of my finger, and shaped with a long curve in front, like an extended pot belly where hips and pelvis should be. Dull, but there it was. The others had been scattered, and I’m no longer sure if I even had a t-rex. But I remember this other fellow. Not from the days when I played with dinosaurs, but just after.

I remember sitting by my window, which was crowded by the branches of a droopy and oppressive tree, and looking at the little figure and wondering if it said something about me. I was alone, and I think by this point I expected to be alone. My friends had all moved away and I hadn’t been able to make new ones. My parents were out at work. I expect the sky was gray, and perhaps winter was coming on and I’d learned how bad this school year would be. In the silent couple of hours between getting off the bus and hearing my family come home, I looked at the dinosaur and wondered if it was me. Not all that long, but at some moment.

Now I think, yes, that dinosaur was me. I recognized my proxy. I’ll even say that I recognized what I was doing to my body. Holed up by myself, I was motionless and jamming my joints together. I was losing part of my body, the part where the dinosaur had a curve instead of joints. I could feel it happening, and for that moment I came close to noticing it. Then I didn’t.

I was 17 before anyone visited my room again. This was a girl from school, and she laughed at the Snoopy poster above my bed. I’d put it up when I was seven, back when I loved Snoopy. Now I felt like the girl had played a trick on me. Just because a poster of Snoopy had stayed on my wall, that didn’t mean it belonged to me. I’d forgotten it was there. Sit in your room long enough and you lose everything, and meanwhile it all piles up around you.