Not here, not yet. 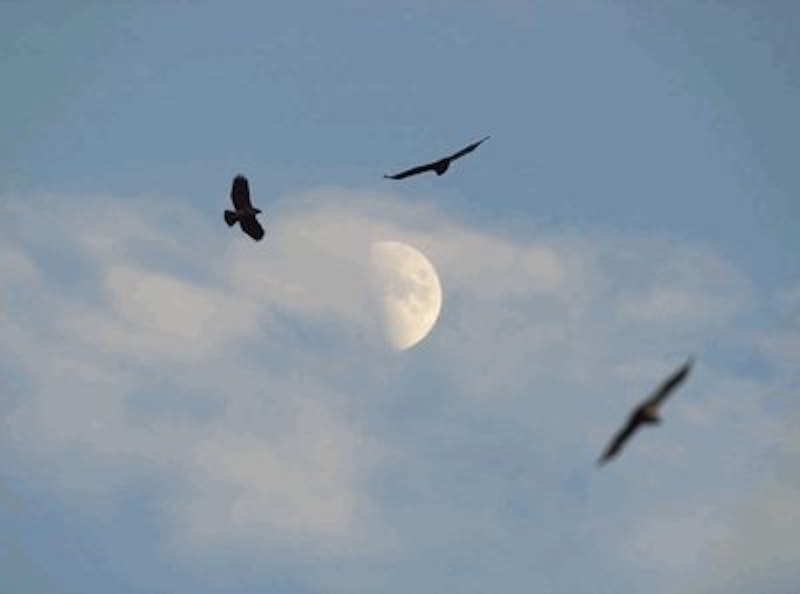 I was on the back patio at my cousin’s house in Cherry Hill watching the rabbits, squirrels, ridiculous chipmunks, and birds of various colorful sorts capering around harmoniously in the meadow hidden behind the ring of houses, sunlight streaming down through the tall trees out of a perfectly clear sky. I’ve never seen chipmunks anywhere but here.

It wasn’t long after noon: nice, temperature in the 70s. I’d just smoked a joint. I was thinking about Twin Peaks and lunch. Lunch has become my primary meal of the day. There’s a place nearby that does excellent linguine with white clam sauce, currently my favorite dish. I like it with a good merlot. A hawk swooped in through the trees and perched on a branch. All the little animals scattered.

My aunt doesn’t leave the house much. She’s 98 years old, weighs about 90 pounds, and needs a walker to get around. It’s good for her to get out occasionally, and so the two of them had gone off to a luncheon date with a couple of old friends. My cousin is 71, probably in better shape than me. The house is very tricky, and in no way ADA-compliant. It’s a classic suburban split level, two very narrow flights of stairs; challenging for me with my decrepit spine, dangerous without assistance to my aunt. She can’t be left alone.

The hawk loitered for a few minutes and took off. The animal circus resumed. My reverie was broken when my cousin phoned to say that my aunt had taken a terrible fall outside the restaurant, blood all over the place, and that they were headed to the ER at Camden’s Cooper Hospital. She’d get better treatment at a Virtua facility out here in the suburbs, a cleaner facility familiar with her current condition. Further, Cooper’s ER is swamped with gunshot wounds, stabbings, overdoses, rapes, and all the other thrilling attractions that constitute summer fun in Camden, so it was a sure thing that it would be hours before she’d be seen by a doctor.

Apparently some typically sleazy New Jersey scam was run years ago that ensured any EMT calls in Camden County involving blood had to be taken to Cooper, in Camden, probably to goose some source of revenue in the most wretched city in America. People who run scams like that should be duct-taped to chairs and force-fed coins until their guts burst open. It’d be a good use for pennies.

I figured this was it. The ones who hang on past the point of becoming a basket case usually die as a result of a fall, directly or indirectly. Merciful release, by way of less than merciful means, but release nonetheless, and at that stage release is always mercy. If the fall itself doesn’t kill, hospital pneumonia usually does.

After six hours of waiting, with no painkillers, she was admitted to the hospital with a rotator cuff injury and a fractured arm. She’d banged her head badly, but the hospital found no signs of concussion. In her position, I would’ve unleashed sufficient verbal hell at the hospital staff to draw a SWAT team, but she instead directed a torrent of abuse at my cousin, in front of God and everybody. This to the daughter who’s been her primary caretaker for 20 years. It’s a very American gothic narrative, very Flannery O’Connor. It’d be great on Netflix. It’s not so great in real life.

The hospital kept her for a couple of days, during which my cousin’s battered spirits lifted somewhat. It was a very brief respite. She was discharged to my cousin with a couple of hours notice. My cousin had no consultation with the attending physician, and was not fully appraised of her mother’s condition. I was stoned on the patio in the back observing the animal circus when she and her brother pulled up. They got her out of the car, into a wheelchair and up the steps into the house. They wheeled her to the stairs leading up to her bedroom, which is where she now resides, and will until her death, presumably. The wheelchair doesn’t fit in the bathroom, so she has a small commode by the bed. The child she once potty-trained now empties her potty. That’s a strange and uniquely American way of dying, the absolutely relentless cruelty of our ridiculous profit-driven medical industry. The extension of life has resulted in deprivation of dignity. There are “hospices,” where people can die with dignity. I know this because my wife died in one. My aunt should be in a fully ADA-compliant facility and cared for by professionals, not foisted onto her daughter. Both of these people worked hard all their lives and paid taxes and bought insurance. They played by the rules. See what that gets you?

Out back, the animals frolic. The hawk circles somewhere, not here, not yet. There was a big storm earlier. Lightning struck a tree down the block. I wonder where Twin Peaks is going. I think it’ll be manicotti and a glass of milk today. Maybe my aunt will go peacefully in her sleep.