16 years ago a family was torn apart. 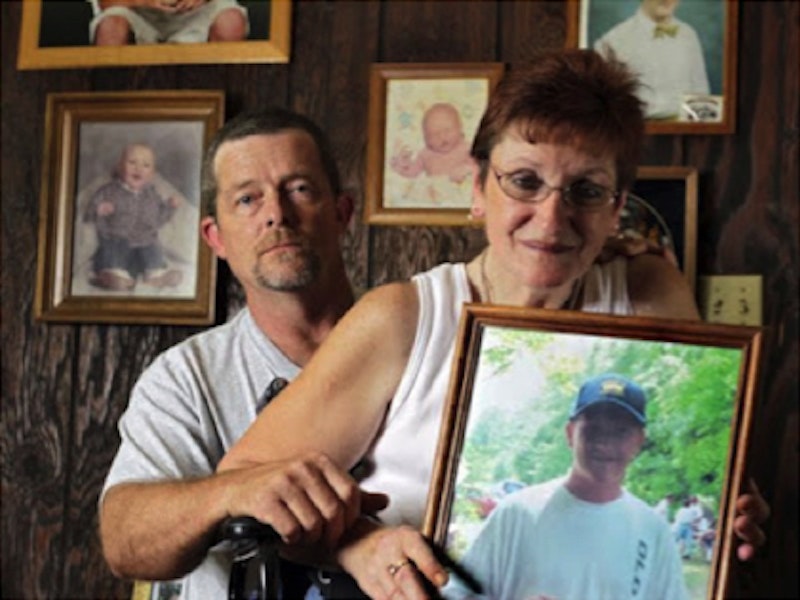 On Friday June 16, 2000, my cousin Kathy Inman, her husband Billy and their 16-year-old son Dustin, were traveling from their home in Woodstock, Georgia to their retreat in the mountains of North Georgia, to celebrate Father's Day with a weekend of fishing. As they waited behind a car at a stoplight in Ellijay, a speeding vehicle plowed into them from behind, wedging Kathy's Grand Am into the car in front of them. The force completely crushed the backseat and Dustin and his dog Lucky died instantly. Kathy and Billy were seriously injured and airlifted to the trauma center in Atlanta where they both lapsed into comas.

While we were all trying to understand this senseless tragedy, my aunt and uncle and Billy's family had to make arrangements to bury their grandson and possibly his parents because we just didn’t know if they would make it. I recall sitting in my aunt’s kitchen as she talked about not knowing how many funerals they’d have to plan, when she picked up Dustin’s wallet that had been given to them by the police. The wallet was stuffed with cash that he'd been saving to buy a car. She showed it to me and then she started to cry.

Billy was discharged after a few weeks, scratched and bruised and suffering from memory loss, while Kathy remained much longer due to her more extensive injuries that required rehab. During a visit with her in the hospital, she recalled to me in very few words, because she wasn't able to talk much, that she knew Dustin was gone before anyone had told her. She told me that he’d visited her at the scene of the accident and told her he was okay.

After her hospitalization and rehabilitation, Kathy went home to begin the rest of the recovery process. Due to brain damage and spinal injuries, she faced a very long, painful rehabilitation. We'd all had hope she would make a full recovery but sadly, 16 years later, she’s confined to a wheelchair, enduring constant pain and frequent visits to her doctors.

The man who committed this crime, Gonzalo Gonzalo Harrell, aka Gonzalo Harrell-Gonzalez, admitted to police at the scene that he'd fallen asleep at the wheel. After complaining of stomach pains after the accident, he was taken to a local hospital in Gilmer County where he was left unattended by police and escaped, never to be seen again.

Police determined that Gonzalo Harrell was an illegal alien with a North Carolina driver’s license. In 2001, he was indicted by the Gilmer County Grand Jury on several charges including vehicular homicide. In 2002, the FBI issued a federal warrant charging him with unlawful flight to avoid prosecution. A nationwide manhunt ensued with his face broadcast on America's Most Wanted and other news programs. A few years later, through Billy's tireless efforts, law enforcement authorities located a man they thought to be Gonzalo Harrell but the man told police he was actually Harrell's brother Roberto. Forensic experts determined this was true and so the manhunt continued.

Billy has been on a crusade these past 16 years pushing for immigration reform and justice for families who have experienced the loss of loved ones at the hands of individuals who are in the U.S. illegally. He is not anti-immigration, he is anti-illegal immigration. Billy and Kathy's story has been featured on nearly every major news outlet over the years and all they've wanted out of it is justice. Recently Billy received a letter from the Department of Justice informing him of the inability to extradite Gonzalo Harrell to Mexico because that country does not criminalize vehicular manslaughter without intent to commit a crime. In an effort to placate Billy, the letter went on to state: "Notwithstanding the limitations of the law, you should be comforted by the fact that your efforts have not been in vain. Your tireless fight for justice has reached the highest levels of both the United States and Mexican governments and your family's loss has touched us all."

Not high enough apparently. There is no comfort for Billy and Kathy and they feel their tireless fight has fallen upon deaf ears. Billy’s exhausted and feels like a failure at times for not being able to bring to justice the man who decimated his family. He told Breitbart in March of this year, “I want something done so this doesn’t happen to others, but there’s just too many people that just don’t care. Even when you have family members that tell you we’re wasting our time. They say it’s making my wife worse, and the depression and all of the issues she’s got going on worse. They say it’s just dragging her heartache out even longer—they don’t understand that our heartache isn’t going to be any longer or lesser either way."

Billy wants to care for Kathy in the manner she requires but it’s difficult. She’s in pain and discomfort every single day. She wakes up in the middle of the night screaming and crying. In addition to her physical pain, the emotional pain is overwhelming. They’ve accepted their son's death but they cannot accept the manner in which he died and the fact that the man who did it is free to live his life and hug his three children every single day.

Dustin's death left a devastating impact on his family. For his parents, there is no comfort or peace. They take it day by day and do the best they can but every single day they’re reminded that their son will never age, attend college, get married, have children of his own, and grow old and gray. The dreams Billy and Kathy had of retiring one day and moving to a cabin in the mountains and spending time with their grandchildren will forever remain just a dream.