The Gorilla In My Life

I’ve always tried to avoid self-repetition in life, to some degree, due to that gorilla. 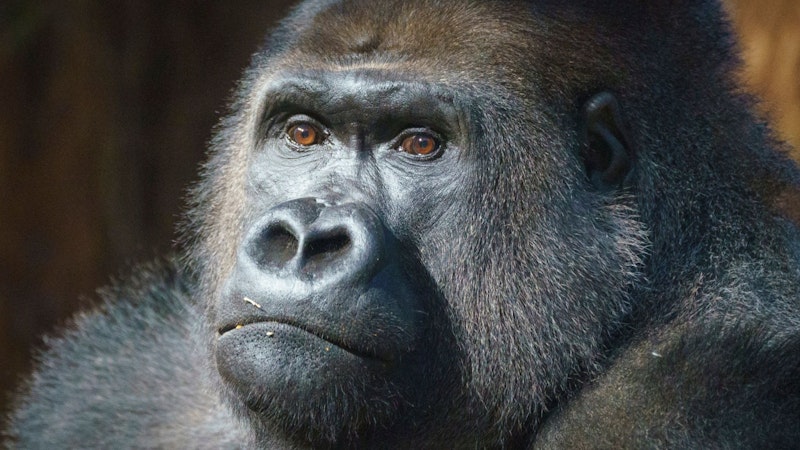 We’d go to the Baltimore Zoo regularly when I was a child. I have many memories from the place, being in the elephant house and seeing its occupants in giant leg-irons, hearing the lions roar at twilight, hiding with my brother and sister in a phone booth to save ourselves, visiting the bird house and having the Toucan suddenly leap out at me, seeing swarms of bees filling soft drink cups near the concession stand, and the Mansion with the smell of caramel popcorn. Dark stuff too: I heard that a man was found mauled in the polar bear cage and another body discovered on the fountain in Druid Hill Lake. Mysteriously, his clothes weren’t wet. Even then it was Baltimore.

The most powerful and lasting impression upon me was seeing a small gorilla behind a plate of dirty safety glass in a room about two yards square, lit by fluorescent lighting. It was a pitiful spectacle. The glass-eyed gorilla, focused on nothing, would force itself to vomit by sticking its fingers down its throat, and then re-consume what it brought up. I recall the greenish-yellow tinge of the light, the barrenness of the scene, and the traces of its fingers on the floor as it mopped up the vomit. I didn’t know what to make of it, so I asked my father why the gorilla was doing it. He said it was because the gorilla was so bored it was the only thing it could do to keep itself occupied. That made sense, at least more than whatever logic led him to be caged in the first place.

I’ve always tried to avoid self-repetition in life, to some degree, due to that gorilla. Repetition symbolizes boredom, a lack a creativity, imagination and freedom. Avoiding repetition may be a fantasy. That’s what composer Béla Bartok said: he was always writing the same piece of music in different ways and that was all any composer could do. Perhaps each of us is the expression of a set of possibilities, like a hand we’ve been dealt. I try to keep them as shuffled as possible, it’s better than eating vomit.

As I went food shopping today I heard several songs, some that made me feel like I was back in the zoo. I suffered through awful covers of  Marvin Gaye’s “Sexual Healing” and one by a singer with a bad Aretha Franklin-like voice. For a moment, I saw myself under fluorescent lighting, staring down at a puddle of puke, surrounded by vacant-eyed beasts. Bad art has always produced a terrible effect upon me, particularly bad music. It removes all sense from life. I began to curse humanity under my breath, sparing no one. Thank god no one was there to see me except surveillance cameras.

It’s bad enough that people still listen to the same music they did 50 years ago, but via cheap copies? Why wasn’t someone burning the store down, overturning the shelves, or complaining to the management? I looked around and no one seemed to notice. And someone was tapping their foot as they price-compared frozen dessert cups. I felt defeated and alone. Why was I the only one grimacing and covering my ears? I paid and left.