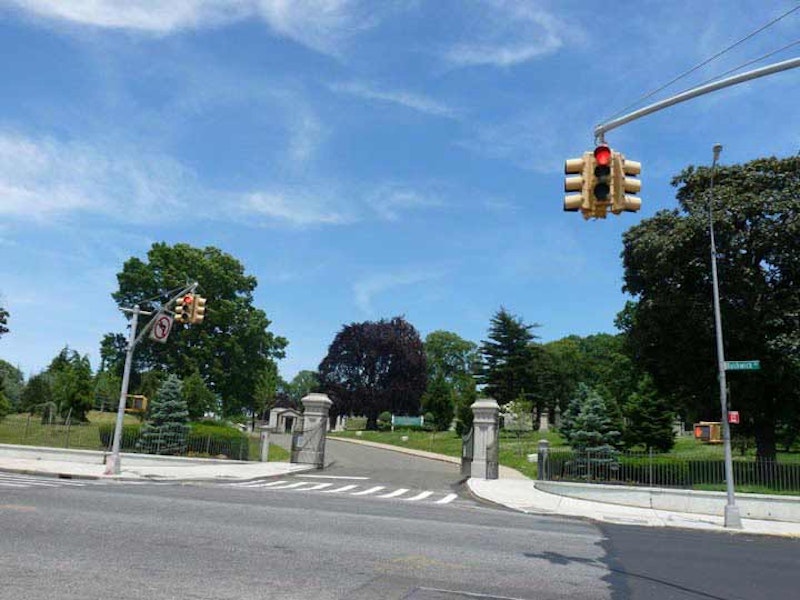 The main entrance of Evergreens Cemetery, Brooklyn’s second largest cemetery after Green-Wood, is at Bushwick Ave. and Conway St. in Bushwick. The cemetery was founded in 1849 as The Cemetery of the Evergreens. Cemetery chronicler John Rousmaniere points out that “Evergreen” was symbolic; pine cones and evergreens symbolize rebirth and immortality. Evergreens were later brought to the cemetery from the Catskill Mountains by Rev. John D. Wells and A. P. Cummings. The land was purchased from a number of the local farming families, including the Howards, who are remembered by Howard Ave. Alexander Jackson Davis and Andrew Jackson Downing, the most-noted architect and landscape architect of the time, teamed up for the initial design.

“Permanent residents” include Broadway impresario Tony Pastor, dancer Bill “Bojangles” Robinson, Lester Young, founder of the Society for the Suppression of Vice Anthony Comstock, and Amy Vanderbilt, who showed America “how to keep the lid on,” an ability lost today. It’s one of three beautiful cemeteries in NYC that double as “burial parks” where you can immerse yourself in nature and solitude along with Green-Wood and Woodlawn in the Bronx. 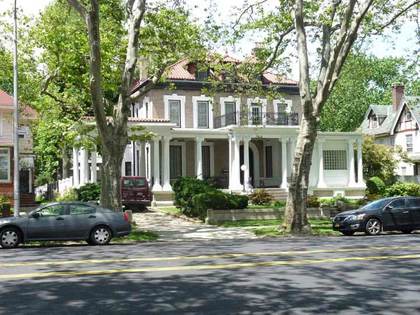 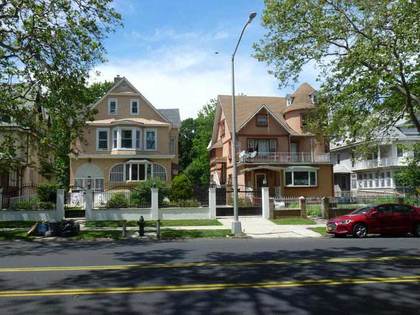 Highland Blvd. (though Queens and Staten Island have the lion’s share of “boulevards,” Brooklyn has some, too) issues east from Bushwick Ave. at the train yards, heading east and south to Jamaica Ave., skirting Highland Park and part of the cemetery belt before looping to an end at Jamaica Ave. It sits at the top of one of Brooklyn’s highest slopes, hence its name.

In the shadow of the elevated transit complex at Broadway Junction a clutch of impressive mansions are found that look down from the crest glacier-deposited high hill that looks down on East New York and on clear days to Jamaica Bay. A walk along Highland Blvd. running from Bushwick Ave. east to Jamaica Ave. near National Cemetery, Sunnyside Ave., a block south, and some streets at the bottom of the hill such as Arlington Ave. and Ashford St. will reveal surprising remnants of when the area was thought of as a suburban retreat, including a Carmelite mission. 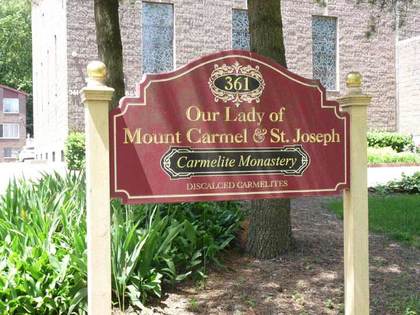 According to the Diocese of Brooklyn, the Carmelites were founded in Spain in 1562. Obscure even to Catholics, this intensely contemplative order is best known via Francis Poulenc’s strange and brilliant 1957 opera, Dialogues des Carmelites. The Sisters’ previous Brooklyn home, at 745 St. John’s Pl. in Crown Heights, closed in 1997, its members dispersing worldwide. The monastery on Highland Blvd. was built as a Lithuanian community center in 1974, although other buildings on the property—including a mansion home to Lithuanian Franciscan priests and a three story brick rowhouse housing the offices and printing press for the former Lithuanian weekly newspaper, Darbininkas—predate the 1974 building. 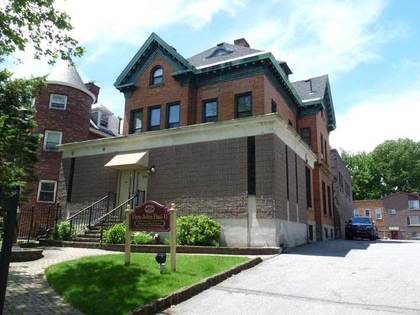 Next door is the Pope John Paul II House of Discernment, described as a place where young men ages 20-40 who believe they may have a vocation to the priesthood study. Similarly, there is a four-year high school, Cathedral Prep, in Elmhurst, Queens, and there was a Brooklyn counterpart between 1914 and 1985 devoted to similar pursuits. Cathedral Prep’s Flemish Gothic building, now home to condominiums, still stands at Washington and Atlantic Aves. 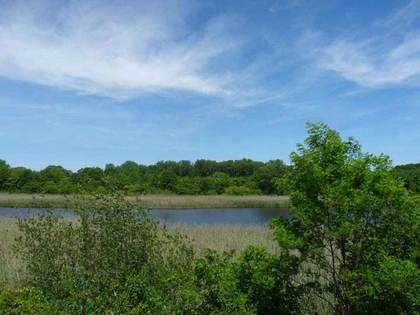 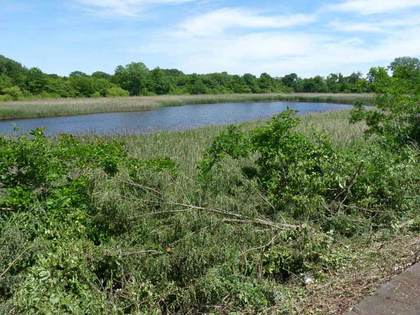 Ridgewood Reservoir, along Vermont Place north of Highland Blvd., straddles the border of Brooklyn and Queens just south of the Jackie Robinson Parkway. The reservoir was built in 1856 and used in Brooklyn and Queens’ water supply for over 100 years; it was decommissioned in 1959 but used as a backup sporadically for the next 30 years, finally ceasing all operations in 1990. At its peak it held over 154 million gallons of water. Its 50 acres were added to NYC’s 28,800 acres of parkland in 2004.

Surprisingly, the reservoir’s legacy survives in several local names: Force Tube Ave., running perpendicularly from Jamaica Ave. to just beyond Fulton St., is named for high-pressure water mains that once ran under it, and Conduit Blvd. in Brooklyn, North and South Conduit Aves. in Queens and Aqueduct Raceway were all named with the reservoir’s proximity a factor.

The Reservoir received Protected Wetlands status under the Freshwater Wetlands Act in early-2019 after many years of wrangling. Prior to that, the pedestrian path surrounding the reservoir had already been improved, with new park lamps, etc. after many years of deterioration. The Newtown Historical Society, on whose board I’m a trustee, has also been instrumental in the activism to obtain such protections for the Reservoir, and had this plaque placed at the reservoir path entrance on Highland Blvd. in early-2019. 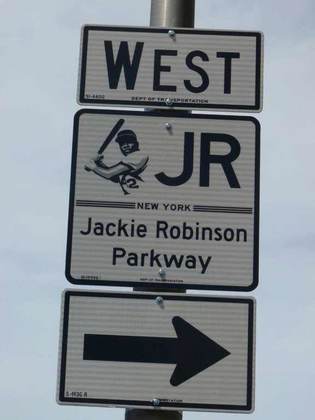 I really like the new Department of Transportation signs denoting the many parkways around town. Each has a symbolic picture representing whatever parkway, and you may expect the one for the JRP is a photo of Jackie at bat. The Jackie Robinson Parkway along with the Grand Central were the first of NYC’s “parkways” providing express (more or less) auto through-routing built within New York City, and were built from 1932-1934. The “Jackie” unusually begins at the confluence of Jamaica and Pennsylvania Aves., two local streets, in East New York, twisting through a convoluted route through the “cemetery belt” and Forest Park at the Brooklyn-Queens border, meeting the Grand Central at Flushing Meadows. It was known by the prosaic “Interborough Parkway” until 1997, the 50th anniversary of Robinson joining the Dodgers. 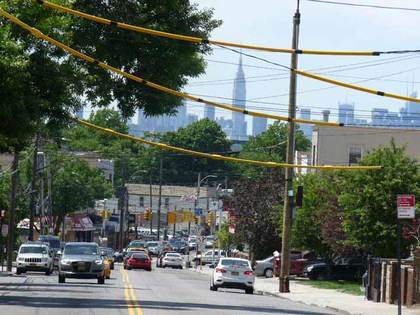 Cypress Ave. is a very old road. It ran from the Bushwick and Newtown Turnpike, the precedent of today’s Flushing Ave., southeast and east across the marshes and glacial moraine along which the cemeteries would later be built to meet Fresh Pond Rd., today’s Cypress Hills St. It was a plank road and consisted of wood planks. That pavement style didn’t hold up well and gave way to later innovations such as macadam and asphalt. Traveling northwest on Cypress Ave. puts you in a direct line with the King of All Buildings. My walk wasn’t done, as I continued into Ridgewood. Images from that leg of my walk will be in a future segment.