The First White Skinhead I Ever Met

A party in suburban Baltimore, circa 1994. 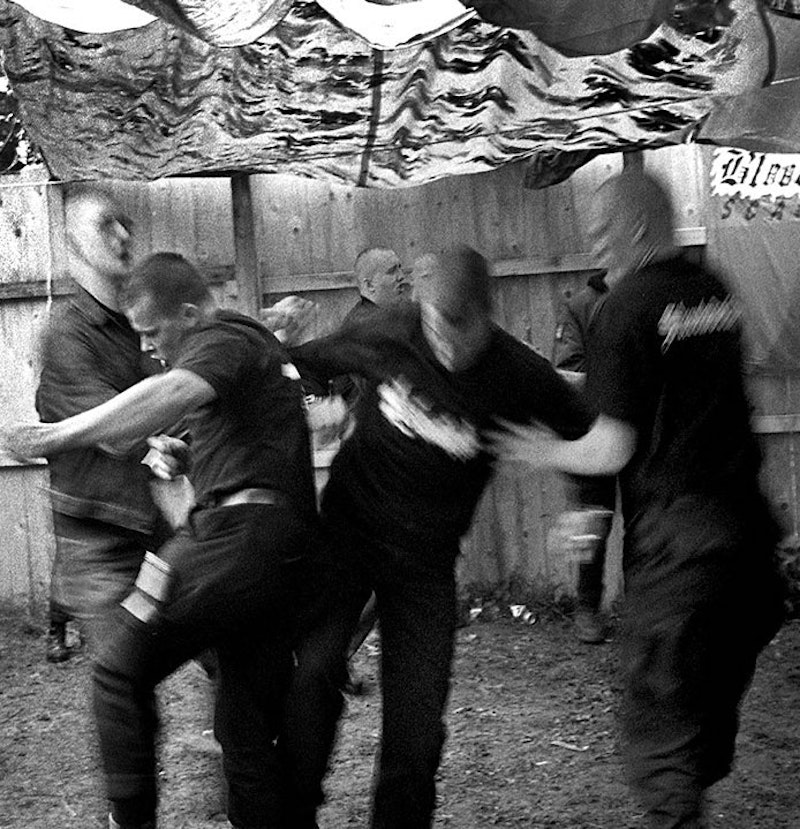 For the last few days, I've been thinking about a particular birthday party I attended when I was in high school. It wasn't a crazy party, but was in some ways emblematic of a lot of parties I went to in 9th or 10th grade, even 11th grade: these were parties parents threw for their kids at home or at a local recreation center.

There were some snacks, maybe a pizza, a cake. Gifts were given. Smoking was frowned upon but not in a mean way; it had to be taken outside. No alcohol or drugs. If you were invited, you probably weren't gonna start a fist fight with anyone else.

(My biggest liability as an attendee was that I sulked a lot, listened to Dinosaur Jr. on my knock-off Walkman, and seemed incapable of making conversation. I've improved, somewhat, in the years since.)

These were chill, multi-racial, multi-ethnic gatherings with definite beginning times and ending times in Baltimore County, Maryland. They were uneventful. No one will ever make movies about parties like these, probably.

This party was similar, and different.

It was held in the sprawling suburb of Randallstown, not far from Randallstown High School, in a basement. The birthday girl was a year or two older than me, and she was the friend of a close friend and the girlfriend, or maybe ex-girlfriend at that point, of a classmate. There was a good-natured guy at the party who looked like a miniature Busta Rhymes, and he allowed me to take a photograph of him with a girl who looked like a young Amanda Seyfried, who was on crutches for some reason. They both had fantastic smiles.

There was the birthday girl, who was Jewish, and a cousin of hers, who was also Jewish, and a number of their relatives. There were my friends, white middle-class kids. There were two hardcore punk rock dudes from my high school, maybe a year or two younger than me, who I knew by sight but not by name.

Importantly, bizarrely, there was a skinhead there. The first skinhead I'd ever been around.

I wouldn't have known he was a skinhead, necessarily. He was thin, blond, wary, had a shaved head and wore a black jacket studded with patches. In the mid-1990s that wasn't unusual: it was a fashion statement or alternately a declaration of self, and most of the people flaunting it were punks.

This guy had a white power patch on his jacket and seemed very tense. I’ve no idea why he was at the party or who he came with. The bad vibes were confirmed when my friend took me aside and whispered, "Ray, do you know what that guy stands for?" I knew enough.

Everyone avoided the skinhead, who was mostly just trying to look tough; everyone moved away from him and tried to enjoy the party. No one fought him, and he didn't fight anyone, but one of the hardcore punk rock guys—to his eternal credit—did briefly engage the skinhead in a debate about his beliefs that I didn't fully witness because I was ready to head home by that point.

This has been a long anecdote, I know—sorta anti-climatic. But stay with me.

That was 1993 or 1994. America wasn't necessarily at some zenith of inclusion and harmony, but this was pre-Timothy McVeigh, and essentially pre-Internet. That skinhead was basically alone. The people at the party understood, instinctively, how wrong everything he stood for was.

When I think about all of the ills this administration and its fellow travelers have inflicted on this nation—and there are so, so, so many!—the worst, and (possibly) the most indefensible, is the harm that’s done to young people growing up right now. Harm that we don't even understand yet, that we can't even imagine. Most kids will understand how damaging and aberrant and nihilistic the mentalities at work at the top are. But not all of them will.

If the past three years have taught us anything, it's that a twisted, racist cohort that's a minority of a country can cast the largest, and most cruel of shadows.