Harper Lee on the Subway

Brilliant, no? One part Brecht, one part Max Bialystock. 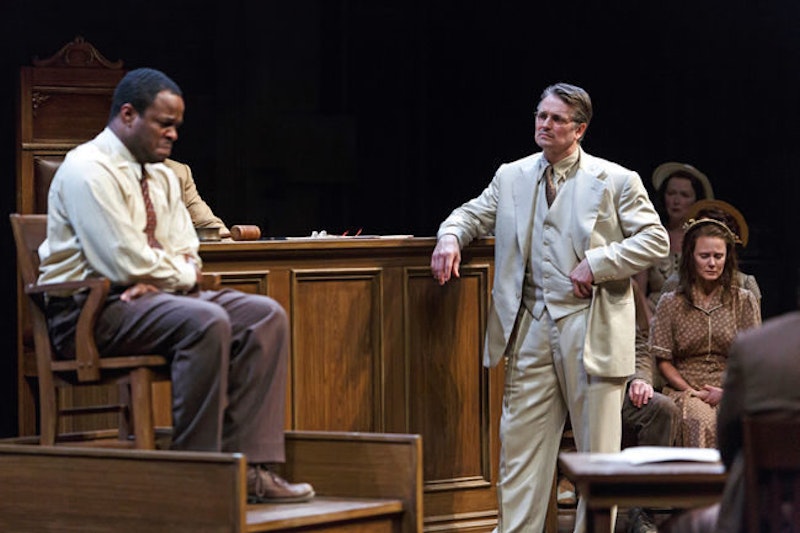 At Amazon there are at least three dozen titles relating to Harper Lee and/or To Kill a Mockingbird (book or movie). Like Napoleon, this franchise will probably go on forever. There's even a new Broadway version of To Kill a Mockingbird, now in previews at the Shubert Theatre, and starring Jeff Daniels.

This is about the third stage-play of TKAM, but it's written by Aaron Sorkin (The West Wing; A Few Good Men), and so the story's juiced up with fresh, snappy dialogue and overhyped emotions. But the real oddity here isn't the script, but a very weird casting decision: the three little children in the tale, Scout, Jem and Dill, are played by adults. Yes! So tiny tomboy Scout is played by a 40-year-old woman.

Brilliant, no? One part Brecht, one part Max Bialystock. And if this turkey folds in February, we can blame it on the philistinism of tourists, who came in expecting something like the maudlin, black-and-white 1962 film with Gregory Peck, but instead got some kind of experimental-workshop play.

Staging, or writing about, To Kill a Mockingbird always comes with a fundamental obstacle. The original novel, as published in 1960, is a Feejee Mermaid of a book: mainly a collection of nostalgic, meandering tales of a small-town Southern upbringing ("a children's book," said Flannery O'Connor), but with an obtrusive interracial-rape subplot sewn onto it. Inevitably, when the time comes to write a film script or play about a chimera like this, you're going to end up centering it around the high-concept "mature" material, even though that takes up only about a quarter of the original story.

This of course is what happened with the screenplay for the film. A lot of time spent delineating racial issues, with crippled negroes, and poor white trash, and then a long courtroom drama. So we end up with long stretches in which the kids—the actual lead characters in the novel—have nothing to do at all but stand around and watch.

Casting adults as the kids, as in the current production, gives those roles a little more agency, makes them seem less passive. But we're still stuck with a play that's built around a melodramatic subplot that's nothing more than an obvious, oleaginous, early-1960s allegory about class and race.

Like many people who read the book first, I didn't like the film when I finally saw it, for some of the foregoing reasons. Then some years ago I found out how the book came about, and I realized that the novel itself was a mutant creation, and the rape plot oughtn't to be there at all.

In the 1980s I had a friend named Ben Bagley, and Ben in turn had been a friend of Nelle (Harper) Lee in the mid-1950s. Back then Nelle was working at a BOAC airline ticket counter in Manhattan, and writing little Mockingbird-ish stories that she tried to shop to an agent and book editor.

Then she wrote a so-so novel, but didn't publish it, and finally she went back to her stories, and strung some of them together. On the advice of her editor, she tightened it up with an edgy new "adult" plot that would make the novel more commercial. Behold: To Kill a Mockingbird, the book.

I don't know how Ben Bagley and Nelle Harper Lee met. I assume they just moved in the same literary, arty circles in New York, back when Ben was young and successful and rather famous, and Nelle was a nobody. Certainly they both knew her childhood friend Truman Capote, who shared some points in common with Ben.

Bagley was a prodigy who ran away from Vermont to New York when he was 16, and worked as an office boy at McGraw-Hill. He saw a lot of musicals and cabaret shows, and decided he could do better. Which he did, with a string of revues that got high critical marks from Walter Kerr, and helped launch the careers of Tammy Grimes, Joel Grey, Larry Storch and others.

Eventually, when revues were no longer in vogue, he’d just record "original-cast albums" of imaginary shows made of neglected show tunes. There were dozens of these eventually; you used to see his LPs in the bin at places like Tower Records, where there was often a whole Ben Bagley section.

He'd pull in the oddest assortment of people to record the songs: Katharine Hepburn, Rex Reed, Anthony Perkins, for example. For a while Ben was sleeping with Montgomery Clift—this was the old, mangled, 1960s Monty—and was going to have Monty do a song on his next album. Then Monty had a heart attack and died. Ben was at a summer party when he got the news. ("My first reaction was, 'Oh thank God!' Because he was so far gone, there was nothing to be done for him.") Ben ended up having Tony Perkins sing the song instead.

In the late-1980s I helped put together a charity fundraiser with American Express and the Shubert Organization. We bought out half the Majestic Theatre (Phantom of the Opera), and I ended up with a spare ticket and no date. I called Ben. He showed up, a shrunken, tubercular figure in a stinky red-velvet smoking jacket. During intermission a friend's husband pointed out that Ben was featured in the Playbill, in a theater-trivia column. This pleased Ben greatly, but he thereafter imagined that I’d arranged the whole thing and was close to the levers of power.

Ben was then trying to raise funds to put all his records on CD. For months he was after me to get the Shubert people or American Express to fund this venture. When I didn't come through, he turned to Doris Duke, the eccentric, convivial tobacco heiress whom he'd apparently known for many years. I don't know why he didn't go to Duke in the first place.

I think Ben was actually on his way to Doris' the last time I was on the subway with him. We were riding from his house in Queens into Manhattan. As usual I was carrying a flat white Lord & Taylor sweater box in which I kept various scribbles and paste-ups. It was this time, or maybe on a previous subway ride, that Ben told me I reminded him of Nelle back in the 1950s.

Not a very flattering recollection, really. "You know, what's her name, the girl who ended up writing To Kill a Mockingbird. She was always going back and forth with her stories in a box like that... Years and years... Nobody would buy her stuff, but she kept working..."