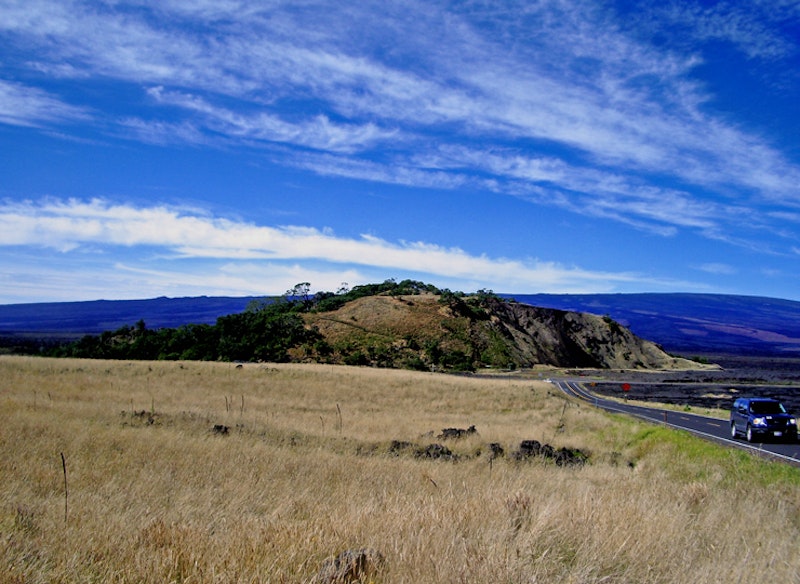 The view from the peak of Pu‘u Huluhulu, a cinder cone dormant so long its fertile volcanic soil is now covered with ferns and hundred-year-old Ohia trees, is fantastic. From the summit of this small, steep cone of green surrounded by the intermittent desolation of Kilauea’s volcanic activity, my fiancée and I can see much of the Hawaii Volcanoes National Park. Off in the distance is the Pacific Ocean, gray-blue and shimmering on the other side of alternatingly black lava fields and green-forested areas. Turning our backs to the ocean, we can also clearly see what looks like an odd, blue-green pole covered in fuzzy rectangles. It takes us a minute to realize this is a cell phone tower.

It’s clearly meant to be some kind of evergreen, but there aren’t any real evergreens around, and since the tower is twice the height of any of the native Ohia or Koa trees, which look nothing like pines in either form or color, the overall effect is comical, bordering on annoying. I’ve seen towers like this one in other parts of Hawaii, and the mainland (what people in Hawaii call the rest of the country), and I’ve decided that I hate them. Towers like the one at the border of the national park are the reason I can’t get behind fake trees.

While I’m generally a supporter of mixing form and function, of combining aesthetic and utility, I wish the people making these would just stop pretending their cell towers are something they’re not. They are strikingly similar to the hideous fake plants in your local greasy spoon. You know the ones—coated with dust and spotted with French-fry oil and spilled ketchup, they sort of look like the ferns, trees or flowers they’re imitating, but only from a distance, and only if you don’t look too closely. They’re meant to be better than nothing.

But I’m sympathetic. Plants are hard to imitate, even for people who don’t spend as much time looking at the real things as I do. I grew up on a flower farm and one of my favorite pastimes is getting lost in forests and parks. Still, I can’t help the mixed feelings I have about fake plants in general, and undercover cell towers in particular. Many of the towers I’ve seen have been so conspicuous because of their tree-like dressings than they would have been in plain metal, and while I really do appreciate the efforts of national parks and businesses and whoever else is putting up these towers-in-disguise, I wish they’d either put more effort into making sure the camouflage actually makes the tower less visible, or give it up as a bad job. Kind of like the restaurants—if they’re not going to at least dust their plastic plants every now and then, the gesture’s wasted.