A true tale of the streets of Québec. 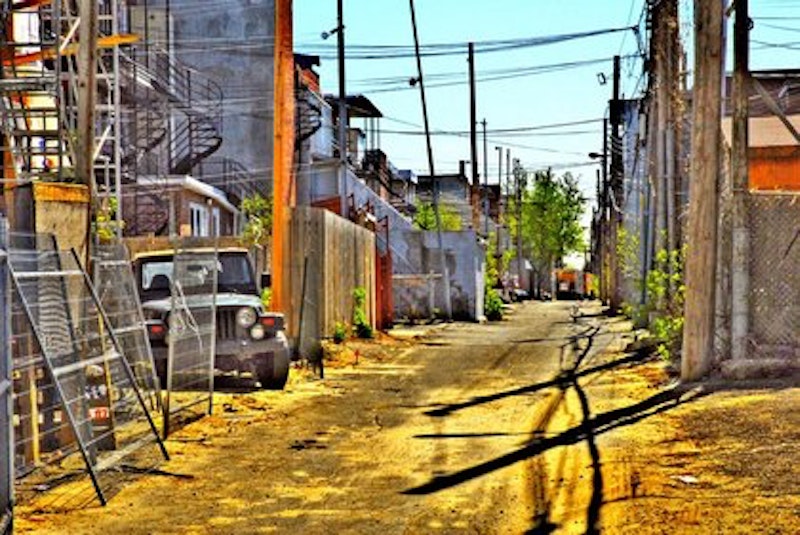 It was my first afternoon in a new apartment, and I woke up because Sophie was out on the landing yelling. “Sortez!” she said. “Sortez!” That means get out. Sophie was charging from door to door, banging. Her voice was loud but thin. From what I've seen, she's by nature a cocky woman. But this afternoon she was half in a panic.

I drifted from my apartment, not sure what was up, and found another tenant on the landing, a woman from upstairs. Sophie barreled toward her apartment, which faces mine from down a short flight of stairs. The door to Sophie's apartment was open and she hustled inside. You could see smoke; it was coming through the wall.

“A fire,” the woman from upstairs said, translating Sophie for me. I looked in through the door to Sophie's apartment, partly because I still didn't know what to do, partly because Sophie has a collection of figurines that troops up and down the walls, shelves of them, little tables of them. They're all dusted, which seems impossible when you've got squadrons like that.

“Tabernac,” Sophie said, which means tabernacle and is a swear word. She was talking to herself, fast, and my French was too bad for me to follow. Sophie wrestled with a carrier box for cats, which she had open and standing on its end. I saw that she was getting a black cat to go inside the box, a good-size black cat. “Oh!” Sophie said. “Oh!” She's a squat, buzz-haired, rapid woman in her early 60s. I think that normally she's a plug-ugly, jolly character. But now her eyes bunched and the corners of her mouth were notched; her face looked like it was trying to stretch flat with her skull. She looked scared.

She got the cat into the cat box, and I followed her and the woman from upstairs. We went though the garage and out into the back, which is a narrow, dinky street with no traffic, just the back-ends of houses. People call that a ruelle. In English it's “alley,” but the meaning is a bit off. An alley is a sliver between two buildings on a city block. A ruelle is bigger. It's a poor excuse for a street, but there's room for people to clump up and stand about, and that's what the neighbors were doing as we emerged.

“The fire was 15 minutes ago,” a man with a white mustache told me in English. He lofted his hand, palm down. “Wooosh. That high.” White smoke was pouring straight up.

“Ah, oui,” Sophie said into her cat carrying box. “Sauvé,” she said. “Maman t'a. Oui, t'es bien.” Saved, mama has you, you're fine. She was on one knee, settled in the middle of the ruelle, and the box was down as it should be, long side on the ground; she had to crane to get her mouth near the grid. The cat never made any noise that I could tell.

With that conversation done, Sophie was back to her old self. She chatted with the neighbors and called out to the firemen. Eventually she parked the cat box next to me, since I was sitting off to the side and keeping quiet. “Verifiez,” she said, which means check. I don't know where the upstairs lady had gone.

Sophie went back to appraising the situation with the others. Everybody was in sweat pants and team jackets, things like that. I had my computer under my arm and squatted on my plastic storage box, which has a lid whose handles snap shut and which I use for my money, cards, passport, lease and so on. I could grab that and my computer, and the keys, and know that I had everything I needed to preserve. Fifty-two and I have nothing else, unless you count boxes of books I want to get rid of.

The firemen slogged by in their helmets and togs, metal cylinders on their backs. “Caw-lisse,” Sophie said, commenting to somebody about the situation and how it evolved. She was saying “chalice,” another swear for the Québécois.

The fire came from a stand-alone garage next to the building. The stand-alone is a story tall, nothing more, and the firemen climbed to its roof with a ladder. One of them had an ax, another had a power saw, black and red and gleaming; it was new. They went to work and the results were anticlimactic: some clouds of dust; men in helmets standing about, conferring.

Some more trudging back and forth by the firemen. A lady, an old one, asked a question, and I noticed how old Québécoise ladies will have hair dyed like copper, sharp enough to burn the eye. Another old lady, ancient, was surrounded by attentive men and women in their 60s. Somebody produced a chair and she was eased into place.

The firemen returned to the job, which they conducted much as they had before. The neighbors drifted away. A frizz-haired woman with a calabash face told me in French how she didn't know if there was a business in the garage (I asked) and how there hadn't been a fire in the neighborhood before. Sophie, who had been out in the street and trying to get a look at the building's front, came back to collect her cat and talk with another of the tenants. This was a white-haired, jolly man sitting on the balcony right above mine. Apparently he had never evacuated. This wasn't an issue between him and Sophie, they just talked.

Eventually we had the all-clear. I knew this because Sophie took her cat box and headed for our building's garage, our way back in. “C'est bien?” I called. Sophie answered over her shoulder that, yes, it was.

On the stairs, I stuck my head in her apartment. Smoke lingered and Sophie wrinkled her nose at the smell. I admired the figurines and more: a fern, I think, and what looked like a marble counter top. I really just had a glimpse.

Sophie let her cat, a girl named Fifi, out of its box, and it stepped deliberately into its old home. “C'est magnifique, votre apartement,” I said. Sophie was not displeased by this, but her answer was offhand. “Ouah, hey,” she said, which translates as “Yeah, really is.” She must have spent so much time making that apartment, but what she really cared about was her cat.