The Death of the Old World

The only disappointment about Alan Furst’s new novel is that it ends. 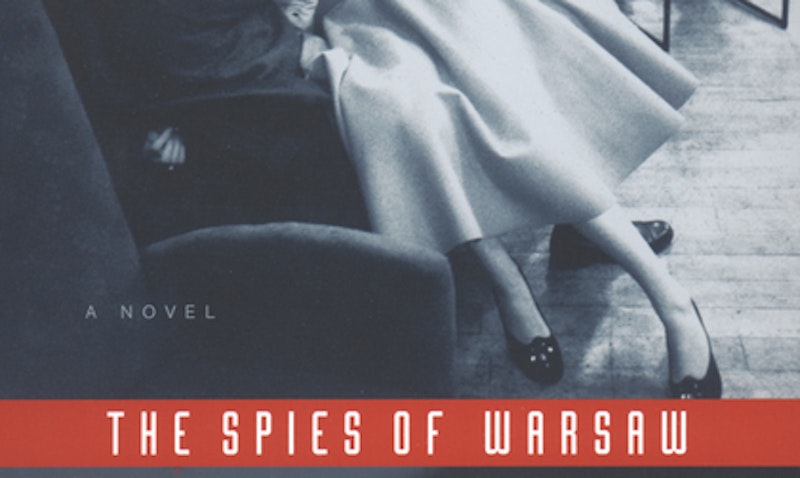 Do you remember the scene in Casablanca when, to drown out the obnoxious Germans, Paul Henreid’s character leads the regulars of Rick’s in singing “La Marseillaise”? If not, it’s on YouTube. Sure, it’s overdone, and we live in a time when many find displays of nationalism very suspicious, myself included. But we must remember that several of the actors, including those playing the jovial waiter Carl and the vulpine Major Strasser, were refugees who fled Europe when the Nazis became randy for lebensraum. The tears the young Frenchwoman sheds on camera were apparently very real. So when Victor Laszlo cues up the band and the whole bar sings the French anthem, I can’t help but think that, in this melodrama of melodramas, for a moment the emotion becomes completely transparent. “La Marseillaise” becomes not a symbol of France, but of Europe’s defiance in the face of tyranny.

It is not the world of Bogie, but that of Paul Henreid’s resistance leader that Alan Furst has made his own in 10 prewar espionage novels. Everyone who writes about Furst says so, but it’s unavoidably true: he is a master of atmosphere. In reading three of his previous novels—Kingdom of Shadows, Blood of Victory, and The Foreign Correspondent—I was continually struck by how a constellation of perfectly chosen details make an authentic 1930s Europe. Furst’s latest, The Spies of Warsaw, has convinced me that the mystique of his world can be summed up in one word: valise. “Suitcase” is a real clunker of a word, and unfortunately ours is a world of suitcases. “Valise,” though, instantly conjures leather and cigarettes, cold train stations and opulent hotels, restlessness and the ability to disappear at a moment’s notice. The Irish novelist John Banville calls this “the fraudulence of fiction”: the ability of the perfect word or description to make a fictional world seem true, even if the author and reader have no firsthand experience of that world. It’s this pleasing fraudulence that keeps me reading Alan Furst. That, and the really great sex scenes.

We meet our hero, Colonel Mercier, the French military attaché recently arrived in Poland, warming up for one such engagement. He is the weekend guest of the prince and princess—minor nobility, but who cares—whose country house “had three tennis courts, for the noble Brosowicz couple…didn’t have one of anything.” Tennis overtaxes his knee, injured in the First World War, so Mercier takes a warm shower, only to be surprised when the princess pulls back the curtain. Furst makes what could have been a clichéd interlude plausibly erotic through descriptive understatement and a bit of detached humor: as she steps into the shower, she hands Mercier “the lavender soap. Only a princess, he thought, would join a man in the shower but disdain the use of the guest soap.”

If you think this too rich, relax. Furst does not dally too long in Barbara Cartland territory, nor does he let The Spies of Warsaw fall into the familiar intercept/intercourse pattern of Bond movies. One of the great pleasures of this novel, and of espionage fiction in general, is the spy’s removal from everyday responsibilities and moral codes. Mercier’s affair leads nowhere and is never spoken of again, so the tennis is really the important thing. It is part of Mercier’s establishment in Warsaw society, and in this and other social gatherings Furst displays his descriptive gift by getting the dynamics of a high-powered cocktail party exactly right in short, supple paragraphs. Such parties are an important venue for Mercier—a name, a phrase, or a suggestion could lead to information, or even a defection.

Mercier’s job as military attaché would probably make Bond fidget. He is a spymaster for informants placed within German industry; his goal to piece together Nazi plans for a tank assault on Western Europe. The getting of the information, whether at cocktail parties or in rundown cafes on the bad side of town, is enough to keep the intrigue simmering, but in these sections the atmosphere can get a bit fuggy. The parade of names and places from the First World War (Petain, Pilsudski, Silesia, the Maginot Line) comes fast and thick at times. I love reading books that require keeping a reference book (or Wikipedia) open nearby, but it’s not for everyone. At one point a character refers in conversation to “Salazar, the Portuguese dictator.” It’s slightly awkward as dialogue, but appreciated for its clarification.

One of Mercier’s informants is Edvard Uhl, a dumpy Prussian engineer who has fallen in love with the prostitute Mercier has led him to believe is a countess. When Uhl is found out by the SD (the intelligence division of the SS), their attempt at killing him explodes Mercier’s web of information. The ensuing fight between Mercier and SD agents is described with taut minimalism and a slight remove from the action that is reminiscent of Raymond Chandler. Mercier is left slightly battered and without a key source, but the hints Uhl provided lead him deep into Germany, where he spies on a secret tank training exercise that his superiors in the French military refuse to believe is happening. The conventional wisdom is that, if the Nazis start were to assault France, they would not come in tanks through the forests of Belgium. Surely, Petain and his followers believe, Hitler would not be so foolish as to repeat the mistakes of la dernière, the last time, the First World War. But anyone who knows the history knows this is exactly what happens. In the middle of the novel, one of Mercier’s fellow agents laments every spy’s predicament: “We spend our lives waiting.” The dread mounts as you read the novel because you know, soon now, there will be no more waiting. Mercier senses it, too, with characteristic elegant melancholy:

Mercier drank some champagne, then, suddenly, and for no reason he could think of, he was very conscious of the life around him, the Parisian chatter and laughter that filled the smoky air of the restaurant. A strange awareness; not enjoyment, more apprehension. Like the dogs, he thought. Sometimes, at rest, they would raise their heads, alert to something distant, then, after a moment, lie back down, always with a kind of sigh. What would happen to these people, he wondered, if war came here?

The First World War was the violent birth of the 20th century, but it took the Second to really destroy the old European world. The Spies of Warsaw is an elegy for the known world ending, and Furst keeps the novel from becoming sentimental by investing his world with so much life. The central plot as described above is only one element: there is the hapless SD officers’ plan to kill Mercier, the defection of a charming pair of elderly Soviet agents, and, of course, the far more meaningful affair with the League of Nations lawyer (and the promised really good sex scene). The Spies of Warsaw ends with the bright energy of a drawing room scene in a classic film: all crisp suiting, clinking glasses and animated dialogue, and the sense that the story isn’t really ending. And yet, somehow, I was disappointed on finishing the novel. I can never put my finger on it at the time, but it’s the same disappointment I feel whenever I finish a good genre novel—the disappointment that it has to end. This is why there are so many series of detective or espionage fiction, I suppose.

Though his books are not a series, on occasion a secondary character or brasserie recurs. This gives them a dim sense of connectedness, of people with convictions and choucroute in common. After you have read a few, you can sit back and think of all his characters working simultaneously across Europe, grudging idealists with ideas worth fighting for. Of his novels that I’ve read, The Spies of Warsaw is Furst’s most sweeping and visceral, tied for my favorite with Kingdom of Shadows. One is good, but you have to read a few for that sense of authenticity, of consummate fiction, to really seep in. That is Furst’s most successful operation of all.

The Spies of Warsaw is published by Random House. His website is http://www.alanfurst.net. If you’d like to immerse yourself in Furst’s literary heritage, check out the anthology he edited for Modern Library Classics, The Book of Spies, which includes excerpts from Maxim Gorky, Graham Greene, and the underappreciated Charles McCarry.