Indie But Not Equal

Independent music and film have reached unprecedented mainstream audiences in recent years, so why are small presses still unknown? 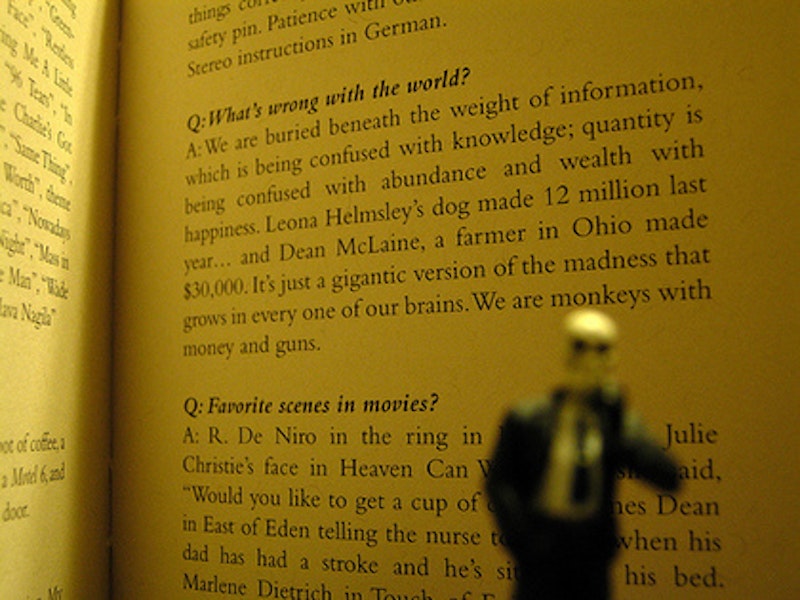 Literature—including nonfiction, fiction, and poetry—is in a slump. The number of literary readers is down, really down, claims the National Endowment for the Arts; young people hardly read at all; test scores are abysmal. Then again, we in the lit business, us writers, know how profligate we are: our business encompasses literary journals, reading series, small presses, literary blogs populating the virtual and paper world like spring grass. It's very odd how we seem to be writing, publishing, and critiquing in droves, but no one but writers seems to be watching. At least not until an author brings home a big contract with a major publishing house.

A recent post on a UK Guardian blog, "Why writers can't go it alone" by David Barnett, wonders why small presses don't get the same respect as their equivalents in the indie film and music world. "We love independent filmmakers and musicians, and celebrate their maverick spirit," says Barnett's tagline, "so why don't we want independent writers?" Barnett says that the same experimental and DIY entrepreneurship that can launch a band like Clap Your Hands Say Yeah to stardom and NPR acclaim only gets writers a back seat to obscurity. He postulates that this occurs because, while we associate indie film and bands with innovation and youthful vigor, we lump indie presses in with vanity publishing, the dreadful schlock writers foisted on the world through self-publishing and scam presses like Publish America. Barnett says that the source of this difference is that we expect writing to be a "higher art" than pop music, and "If just anyone starts punting books on to the street without the careful control of intelligent, creative people, then goodness knows what kind of situation we might have." Readers require a stamp of approval from Random House or Signet before they reach for their wallets.

It's an interesting theory, but mostly sidesteps the issue: people are excited by independent music and film in a way they aren't by indie lit. They go out to see it in great numbers, buy it, listen to it, talk about it, and argue over it with friends and family. Indie music is a major cultural phenomenon, with fans spreading far beyond small groups of in-crowd musicians and their hangers-on, as is the case with much independent literature.

Presumably, there is something about music and film, some individual and shared cultural experience, people get from these arts but don't receive from literature. Many would say it’s a result of our information-rich, limited attention span society. Listening to a new song from a new band costs you 99 cents and four minutes of your time. A novel is 15 to 25 bucks and at least a week sitting in a chair. The experience of music is immediate, visceral in a way reading isn't, at least not to most young people.

This is another good theory but it’s built on prejudice as much as anything. The theory presupposes we, or our young people at least, are dumber than before, less able to handle nuance of thought, less willing to make investments of time and understanding. It also presupposes that there is some inherent quality to film or music that makes it more suitable to today's culture, that makes it automatically more digestible.

I can't subscribe to the idea that we are dumber than before. Human intelligence doesn't just evaporate, not because of the Internet or television or Elvis Presley. Second, who says indie music is somehow more readymade for consumption, that it doesn't require an investment of time to come to understand and appreciate it? Yes, it generates excitement in a way writing doesn't, but the people who follow indie music do so with passion and intelligence and are open to experiment and innovation. The low-fi rambling ruminations of The Mountain Goats are held in esteem by legions of indie music lovers, and the baroquely orchestrated, soul-searching of Sufjan Stevens has little precedent in the world of pop music.

Similar arguments could be made for independent film, and illustrate how willing people are to give new artistic ideas a try, as long these arts find their way in, past the brain to the blood, exciting us with new ways of thinking and feeling.

There is tremendous hand-wringing by writers on the subject, with various theorists lining up in camps on either side, arguing ferociously for their position. Neo-traditionalists say that stories today have no plot, no drama, nothing to keep readers turning the page—it’s all navel gazing and flourishes of language. Poetry, they say, has devolved into abstraction and word play, lacking any real human feeling. On the other side, experimentalists complain it's all the same tired formula, beginning, middle, end; character, conflict, epiphany, modes dictated more than 30 years ago by the rise of university writing programs. No wonder, both sides say, that people are bored with literature.

I find all of this hard to accept, that writers and their writing are screwing up, failing in their jobs, or that there is nothing in a story, poem, or essay to which readers might be attracted. Writers are as passionate about their art, as intelligent and deep thinking, are playing with form and theme in as innovative and stimulating of ways, writing about the human heart and heartbreak as well as the very best songwriters and independent directors out there. Individual and cultural experience is there, in the words and rhythms and lines—it's just not being transferred from writer to reader.

At the risk of sounding flaky, I think it has something to do with writers' low self-esteem. We have internalized the bad news: writing is over, either pack your bags for the coast and get out or hunker down and accept it, your audience is paltry, no one cares. We lament the days of the author-star, Hemingway on the cover of Life magazine. Sure, we try to remain positive, say that smaller audiences don't mean less personal satisfaction, that the chance to break big is still out there, even if the odds are long, that we should just keep plugging away and don't sweat the numbers, passion and perseverance will find a way. And yet, there is a hangdog fatalism about much of this, a defensive shrug.

Indie film to a degree, and music certainly, has given up worrying about how it is distributed, over what medium and by what format. While writers argue over the merits of the Internet and whether paper is better than electrons, bands distribute CDs and mp3s with equal vigor. Mainstream and independent acts now regularly coexist on people’s iPods; music lovers aren't split into "high" and "low" art categories nearly to the degree readers are. Bands enjoy a fluidity of audience that writers don't, based partly, I think, on their willingness to market with confidence. Bands don't care if you are a reader of university-based literary journals or online lit-zines, they just want you to hear their music.

Perhaps writers should come out of their box and play. Innovation doesn't have to stop at the page, and neither does confidence. Some writers and magazines are doing interesting things in this regard, the Literary Death Matches of Opium magazine, for example. But these things don’t have to be "fun," if it's not your style. Serious is good too. It's about getting the experience off the page and into readers' consciousness. And I believe those readers are out there. They are hungry for good literature, of all kinds, traditional and experimental. They just may not know how hungry they are. They may not realize the experience that is available in the words, how rich and vital it can be, how exciting. Just as in music and film, consumers of literature need to be woken up to its possibilities; they need to realize there is something to be woken to. Literature isn't dead, it’s just sleeping. Words, as much as any art, are a part of who we are.