A City Under Olympic Siege 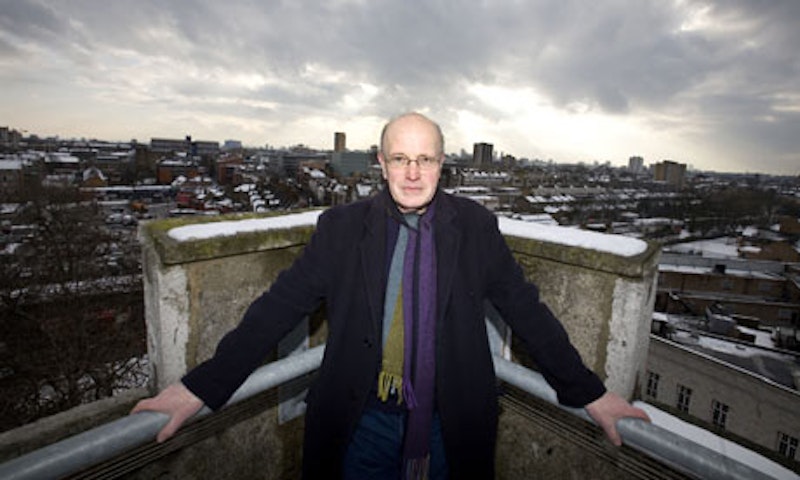 Iain Sinclair’s been a writer for almost four decades, producing poetry, novels and non-fiction shading into fiction, examining themes of place and history and London. He’s not a typical historian; he writes about movies, gangsters, pulp novelists, graffiti, and urban evolution, all in a jagged style heavy on sentence fragments. He’s become an institution— collaborating with comics artist Dave McKean for his novel Slow Chocolate Autopsy, lending a character to Alan Moore’s League of Extraordinary Gentlemen, putting together an anthology called London: City of Disappearances with contributions from Moore and Michael Moorcock and Sara Wise and Will Self and J.G. Ballard and Sinclair himself. It wasn’t surprising that his local library asked to host the launch of his book Hackney: That Rose-Red Empire, which was a mix of autobiography and local history, explaining how Sinclair came to live in the Hackney area of London.

It was rather more surprising when that invitation was abruptly rescinded, at the command of the borough of Hackney. It soon came out that the cancellation had been ordered because Sinclair had been guilty, in the final pages of his book, of saying bad things—and true things—about the upcoming London Olympics.

The cancellation of the launch turned into a mini-scandal. Sinclair found himself doing hits for TV news. The after effect worked for him: he’d found the topic for his next book. Last year’s Ghost Milk: Calling Time on the Grand Project is a kneecapping of the dreams of the 2012 London Olympic development. It’s not an exposé so much as an eyewitness account of what it means to be on the ground, on the periphery, when government and private big money collaborate to reshape a large chunk of a city.

Reading the book, I could sympathize with Sinclair, at least a little. My own home city, Montréal, was deeply affected by hosting the 1976 Summer Olympics. It was considered one of the “good” games, free of the violence of Munich or Mexico City, and before the wide-scale boycotts of Los Angeles and Moscow. Still, the cost was enormous, centered around a white elephant of a stadium. Designed by European architects, the stadium design took no heed of local weather conditions (meaning the roof that was supposed to open and close never worked right) and was ridiculously out of scale with its surroundings. Cost overruns meant it became one of the most expensive buildings in history, the cost rising from CDN $134 million to over a billion dollars, only finally paid in full in 2006. Serious injury was almost added to financial insult in 1991 when a 50-ton chunk of concrete dropped from near the roof; the structure was literally falling apart before it had been paid for.

Still, to judge by what Sinclair reveals, London’s got it worse. Blue fences obstructing public walkways and security guards who won’t let people take pictures. Old buried thorium disturbed by construction and coming out in the water table. Dubious land deals and suspicious finances. Critically panned architecture and excessive security presence: “The Olympic Park,” he tells us, “is zoned like a city under siege.”

Structurally, the book moves from the individual and local to the international. The various parts of Ghost Milk describe first, the area of London most affected by the Olympic plans and Sinclair’s own history with it; then the greater impact on London of the Olympics and other development projects; then projects elsewhere in England; then the impact of earlier Olympics on other cities—Berlin, Athens. Like much of Sinclair’s nonfiction, it’s a rambling, digressive book, chasing tangents that take him far out of his way, filling pages with memories of dead friends or stories of old film shoots.

What holds the book together is partly Sinclair’s perspective—not his vision, exactly, so much as the themes that haunt him. Burdened by the Olympics, by the alignment of public and private power, everything he looks at comes to be about that issue. Everything becomes relevant, everything turns out to say something, if only metaphorically, about the modern hubris of financiers and property-developing empire builders. It’s about the vacuity of the development over the long term, about the denial of history implicit in the project, and the decay of rich men’s dreams. Ultimately, then, Ghost Milk is about Sinclair himself as much as the idea of the grand project.

Accordingly, what also holds the book together is its style. Not an authorial persona, but the authorial voice. You can hear it in acidic side notes, like the reference to projects “sustaining a raft of bureaucrats in the style to which New Labour had made them accustomed.” But it’s clearer in Sinclair’s expressionistic, almost hallucinogenic descriptions; a couple of pages before the previous quote he writes of “the period when club doormen became the dominant players in a culture of ecstasy-peddling, cross-channel cannabis importation. And torture by kitchen implements, DIY accessories, in imposed Barratt estates on the cliffs above Thurrock Lakeside. Gyms that looked like clubs and clubs like gyms. Steroid psychoses: coke, speed, puff and all-round red-eyed craziness. Wrenched teeth in fluffy towels. Sticky puddles on laminate floors. Patterns of blood-spray stencilled on aubergine walls. Quentin Tarantino helming Location, Location.”

That tense, abrupt style, light on conjunctions, heavy on shards of imagery, is a hallmark of Sinclair’s writing. At its best it creates a fugue state in the reader’s mind; connections flash on you as Sinclair crashes one image into another. His leaps from subject to subject, from Full Metal Jacket to Giordano Bruno, are the equivalent on the structural level of this stylistic wildness. A former filmmaker, Sinclair is a master of the quick cut, his writing the equivalent of an art-house montage.

Film is memory, Sinclair writes, and so mediates his recollections and reflections and sense of place through reference to film. Berlin is Wim Wenders, Billy Wilder, and, inevitably given the Olympic subject, Leni Riefenstahl. “The Olympic Park was a newsreel of the fall of Berlin run backwards,” he writes, emphasizing the unnaturalness of the thing: the unmaking of history.

Conversely, ghost milk, Sinclair says, means, “CGI smears on the blue fence. Real juice from a virtual host. Embalming fluid. A soup of photographic negatives. Soul food for the dead. The universal element in which we sink and swim.” And what does that mean? I think Sinclair’s talking about memory and history. About the sustenance we draw from our instinctive location of ourselves within time and context.

This is the distinction he draws between the grand projects, the rewriting of place as imposed from above, and the evolution of community and geography. The obliteration of the traces of what has actually been done; of the sequences of events that define an area in which people live. The grand project is a form of colonialism: people who do not live in a place making decisions for those that do, and imposing their vision of the place and its history upon those who, being its actual inhabitants, naturally ought to shape those things themselves.

Sinclair is a walker, and one of the effects of a development project is the cutting-off of traditional paths: “The outwash of a grand project, as experienced in London, is confirmed by the closure of paths, security barriers across public highways, locked stations.” The result of a project is the rewriting of geography, roads diverted. The map rewritten, and the territory bending to fit the plan.

For Sinclair, grand development projects are Hitler-like fantasies. Ego expressed in concrete. Madness, or perhaps drunkenness. He avoids romanticism in depicting what precedes them; crime, corruption, violence. Rather, he argues that bringing a development to a city sector doesn’t eliminate the corruption—it enhances it, giving the corruption a grander venue in which to express itself. Here as elsewhere, Sinclair’s fascinated by criminality and the gray zone between legal and illegal. His book works in part because it communicates the importance of looking for the shady deal in coming to understand how the development project unfolds.

The book’s not just about the Olympics, but about all such grand and witless projects. If I find Montreal’s Olympic Stadium echoed in Sinclair’s description of London’s Olympic experience, at least my city has few enough of these outscale follies. Jean Drapeau, the mayor who brought the Olympics to Montreal and declared with a stunning inability to grasp basic biology that “the Olympics can no more have a deficit than a man can have a baby,” was fascinated by the idea of big buildings, his so-called “edifice complex”—but since his time, mayors of varying degrees of vision and overall less competence and flair have rarely managed to swing the grand schemes. That may have meant fewer short-term cash infusions into the city, but, to judge by Sinclair’s expressionistic meditations on grand projects, may also mean the city’s been more open to the chaos of its own nature. Sinclair’s problem, perhaps, is that London as a former imperial capital and (still) world financial center is by its nature a place where power’s expressed, in its architecture and in its grand projects.

Ghost Milk is typical of Sinclair’s style. Stylistically dense and unpredictable, it threatens a revelation never quite articulated but left to the dedicated reader. Sinclair’s textual interpretation of the spaces around him demands close attention. But the rewards are there, the concentration of meaning that is the inverse of bloviation about Olympic ideals. Ghost Milk’s the best interpretation of the Olympics I’ve found—and more so when it’s not directly about the Olympics.