Belly of the Beast

In a city defined by its unsentimental paving over of the past, Times Square's various transformations have been especially dramatic. 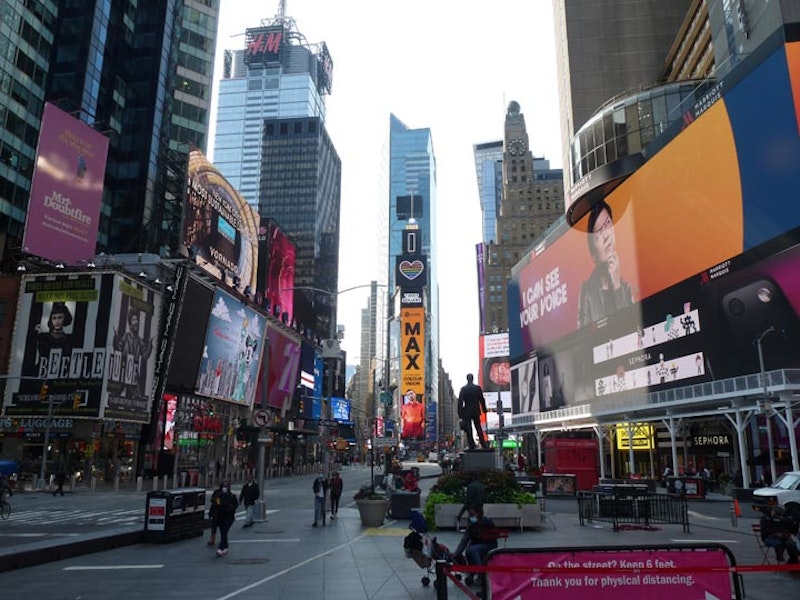 No greater neighborhood transformation has taken place in New York City than Times Square over the last 20 years. A dangerous (some said exhilarating) miasma of pornography, peepshows and prostitution has been replaced by an entertainment mecca with glitzy new and renovated buildings, huge electronic signs (continuing a tradition dating back to Times Square’s earliest days) and restaurants, alongside the area’s dozens of theaters presenting first-run plays.

The Crossroads of the World has been the place where all “true” NYC celebrations happen but nowhere else in New York has seen such a roller coaster ride from respectability to hell’s ninth circle and back again. In my own memory (the 1960s on) the Deuce has gone from a string of grindhouses playing monster and kung fu movies that became Triple XXX palaces with live sex shows from straight to gay and everything in between. Came an eerie lull in the early- to mid-1990s after the pornmeisters had been moved out, and then came the corporate-friendly tourist center we have now. The eerie lull has returned with COVID.

In the late-1800s, the Times Square area was home to dozens of carriage manufacturers and horse traders (the Winter Garden Theater is now in one of the “horse exchange” buildings, and an ancient painted wall ad for J. A. Keal’s Carriage Manufactory was briefly revealed on a building across from Duffy Square, Broadway and W. 47th St., in 1998) as well as the New Washington Market, a northern adjunct of the old Lower West Side Washington Market displaced by the World Trade Center construction in the 1960s.

When The New York Times moved uptown to the Times Tower occupying the triangle formed by 7th Ave., Broadway and W. 42nd St. in 1904, the city changed the name of the old square to commemorate the move. Longacre Square was so called for a London square also home to the carriage trade. The entertainment industry had already begun moving uptown (Longacre Square’s first theater moved there by 1895). The square’s old name survives in Longacre Theatre, built in 1913 at 220 W. 48th St.

In the above photo, the image of George M. Cohan presides over the somewhat dystopian stretch that Times Square has become, with huge, glass-fronted buildings with jagged crowns with video boards advertising TV shows and junk food, by the absence of large crowds while the world remains in the grip of the pandemic. Cohan (1878-1942) once needed no introduction to most New Yorkers, who remember James Cagney’s portrayal of him on film, as well as the song “Give My Regards to Broadway.” Cohan also wrote “Yankee Doodle Dandy,” “Over There” and also made his mark as an actor in Ah, Wilderness and played FDR in I’d Rather Be Right.

Little Johnny Jones, Cohan’s first big hit musical from 1903, was revived with Donny Osmond in the title role in 1982. It was one of Donny’s biggest flops, closing after just one performance. 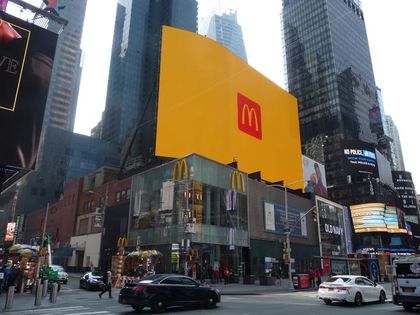 Beneath this huge McDonald’s billboard was once Bond Clothiers and later, the Bond’s concert venue. As Jim Naureckas explains in NY Songlines: “From 1936 until 1942, Wrigley’s had a block-long sign here featuring giant neon fish and the ‘Wrigley’s Spearman.’ This was replaced, from 1948 to 1954, by the Bond Clothiers sign, a neon spectacular that featured two 7-story nude figures (later clothed in neon after complaints from the Hotel Astor) and an actual waterfall with 50,000 gallons of recirculating water. Pepsi took over the spot, turning the giants into giant bottles, and an illuminated clock into a bottlecap.”

In May and June 1981 The Clash played a series of 17 shows at the old Bond’s; the second floor had been converted to a concert space. For the only time in my life, I was oblivious to the lack of air conditioning; in the incredibly packed hall the Only Band That Mattered ran through a catalog I knew by rote. 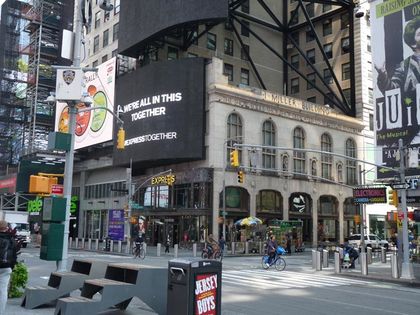 The I. Miller Building, at 7th Ave. and 46th St., was built from 1927-1929. Israel Miller’s shoe store was long patronized by theater people. A closer view of the I. Miller Building along 46th St. will prove to be a glimpse into the Great White Way’s past. In 1927 the I. Miller Company took a public vote to determine the most popular theater actresses of the day with the idea of placing their statues on their new 7th Ave. store. The results came in and sculptor Alexander Stirling Calder was chosen to depict them in some of their most famous roles. Ethel Barrymore as Hamlet’s Ophelia, singer-dancer Marilyn Miller as Sunny, Mary Pickford as Little Lord Fauntleroy, and soprano Rosa Ponselle as Bellini’s Norma.

The building’s façade was recently restored, and is protected from being hidden by video billboards by the Landmarks Preservation Commission. 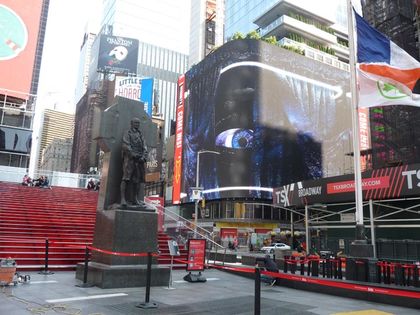 Father Francis Duffy of Most Holy Trinity Church on 42nd St. near Broadway served with the Fighting 69th, a mostly-Irish regiment in World War I, was severely wounded, and received the Distinguished Service Cross for bravery on the battlefield. His monument in Duffy Square, the triangle formed by Broadway, 7th Ave. and 47th St. and dedicated in 1937, features Father Duffy in his World War I uniform standing in front of the Celtic cross. It was here that Tony Curtis’ Sidney Falco, the unscrupulous press flack in Sweet Smell of Success, got his comeuppance in the 1957 film’s final scene. 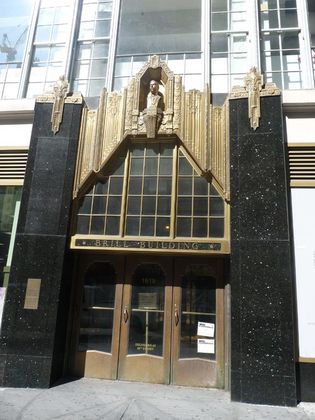 For years I’d labored under the idea that the two busts (one above the door, the other on the top floor) that you can see on the Brill Building, NW corner of Broadway and W. 49th, honored someone in the Brill family for which the building is named. I was wrong. They honor the builder’s son.

In 1929, the Brill brothers sublet the site to developer Abraham Lefcourt to construct a new building by November 1931. Originally, Lefcourt planned to build a tower that would rival the Chrysler Building then rising on Lexington Ave. and E. 42nd in height. But, two disasters befell the developer; the first was the stock market crash in October 1929, and the other was the death of his 17-year-old son, Alan, from anemia. The building, known as the Abraham Lefcourt Building, was scaled down to a 10-story Art Deco structure that bear two unmarked busts of Alan. Abraham, meanwhile, defaulted on his sublease and the Brill Building acquired its current name in 1932. Abraham passed away that year.

Most pop music fans know the Brill Building as a center of music publishing where, by the 1960s, hit after hit was turned out by songwriters; it had been home to big bands and jazz bands of the likes of the Dorsey Brothers and Duke Ellington as early as the 1940s. Hitmakers such as Neil Sedaka, Howard Greenfield, Carole King and Gerry Goffin, however, worked across the street at 1650 Broadway at W. 51st St. 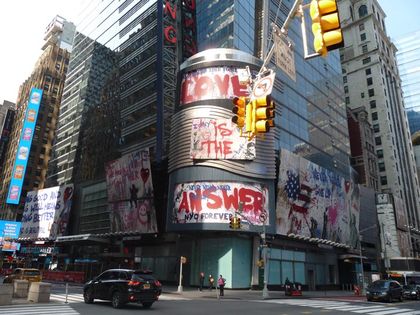 The graffiti-themed billboards affixed to the Ernst & Young glass tower at 7th Ave. and W. 42nd are supposed to be inviting for a younger cohort of Times Square visitors; to me, they portend further decay. The crowds will eventually return, but Times Square seems permanently detached from NYC even as it symbolizes it.